By Pivní Filosof April 15, 2010
I was going to write something brainy, important, controversial which probably would have shaken the world of many of you, but I couldn't be arsed. Instead, I chose something trivial, banal and unimportant, tasting notes (I've got tonnes pending).

Once again, the Norwegian micro Haandbryggeriet, one of my favourites in the world. This time with two of their "historical" specialities, Gravøl (Farewell Ale) and Hesjeøl (Harvest Ale).

I really like this concept, recreating ancient recipes, adapting them to the modern tastes, but at the same time (and least in HB's case) trying to use methods that are as close to the old ones as possible. Fortunately for them, and us, they have plenty of material to work from because, according to Jens Maudal from the brewery, it was traditional in Norway to make special beers for every occasion, and actually, farms were bound by law to do it. 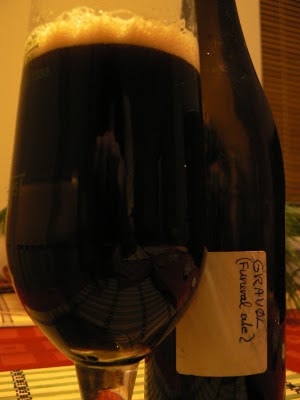 As expected from an ale that was brewed for funerals, Gravøl is dark, very dark. The nose is sweet, with some notes of honey, banana and mild spices. It's still quite sweet to the palate, with caramel, fruit and a background that is a mix of roast, spices and banana. There's hardly any bitterness, in fact for a moment I doubted it was hopped at all (it is, but the brewery is planning to have a version with gruit). Despite of that, and the hefty 7.5%ABV (which goes down unnoticed), it is quite easy to drink, thanks to the flavours being quite smooth. But still I don't know if I liked it or not. I found it interesting, but it's one of those beers that I have to drink again to make up my mind about that strange mix of flavours. It must be also noticed that the bottle I got from the brewery was from a test batch, and I don't know how different it might be from the version that is now on the market. If anyone fancies clearing this doubt, or better still, sending me a bottle so I can see it for myself, they'll be greatly appreciated. 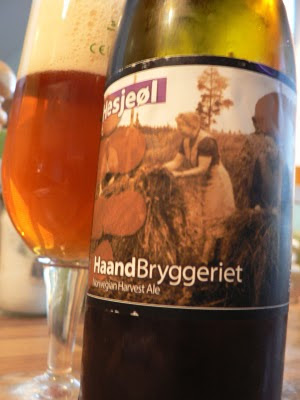 Being something that was brewed to be drunk during the hard work of the annual harvest, Hesjeøl pours a more optimistic colour, quite similar to Schneider Weisse, actually, with a creamy persistent head. I have absolutely no doubts with this ale, I liked it, and I liked it a lot. Brewed with three grains, barley, oats and rye, it's got a dry nose with a strong presence of spice, clove and perhaps nutmeg, on a fruity blanket. The taste is delicious, a harmonious dance of mild spice, herbs and sweet fruit with a rather floral finish. It's not intense, it's not extreme, it's just lovely and refreshing and a bit too drinkable for its 6.5%ABV. I enjoyed every drop. Thanks Gunnar for this one!

And the other day, on the terrace, I popped open one of the bottles I have of Norwegian Wood. It was so nice to be able to have once again something I had liked so much and, while drinking it, not tasting it, realise that I liked it even more than the first time.