What we learnt at Klášter

By Pivní Filosof June 08, 2009
A couple of weeks ago Bohemian Beer Tours organised a very successful visit to Pivovar Klášter. When I wrote my post about it I promised I would tell you some of the things we learnt at the brewery, so here it goes...

Pivovar Klášter was established in 1570 by Jiří Labounský on the grounds formerly occupied by a Cistercian monastery that was destroyed during the Hussite Wars. The brewery is pretty much on the same spot now, it was only moved next door in 1830 when the owner was Kristián z Valdštejn. 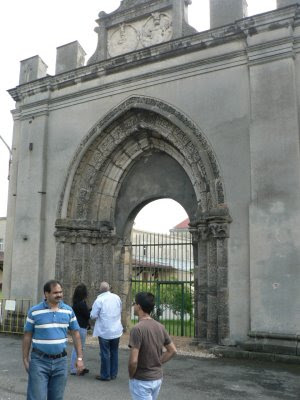 According to what we were told, they use the same recipe of 1570, something I have my doubts about. Back then, most beers were top fermented wheat. However, there are historical records that show that bottom fermented barley beers, though not as common as today, weren't unkown in these lands. I guess we will have to give them the benefit of the doubt.

What is indeed certain is that they still use the same water. It comes from their own underground sources and it has been certified as appropriate to be consumed by new born babies. Isn't it wonderful to live in a country where high quality mineral water is used to make beer instead of just bottling it and give it to babies?

As expected, Klášter beers are brewed using a triple decoction mashing. This process, together with the boiling takes eight hours. Saaz hops in pellets and blossoms are used. Each batch is of 210hl and, after the boling and cooling, it goes to the fermenters. 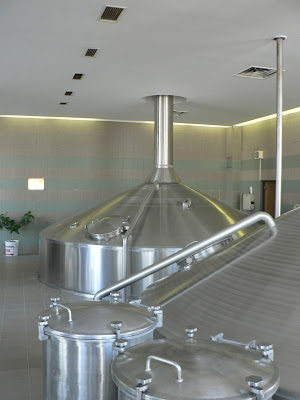 Pivovar Klášter is located on the top of a hill in which there are 12km of underground tunnels and corridors. Most of them date from the 12th century and were dug by the monks that lived in the monastery. The rest are from the 17th century and were dug for the brewery. The oldest one is today used for the restaurant Skála. It was dug to accommodate the monks while they built the monastery, which took 38 years and it has a kind of gothic church feel to it.

We went down to the underground tunnels to see the fermenting room. Despite the low temperatures I could smell the yeasts doing their job as we got close. Man, I love that smell! It is the parfume of life, the culminating point of the alchemy that the brewing process is. As it is traditional, open fermenters are used, each with a capacity of 210hl. Most lagers I know, at least the quality ones, ferment for 7 days. Not Klášter's, they ferment for as many days as they have balling degrees, 10 to 12. 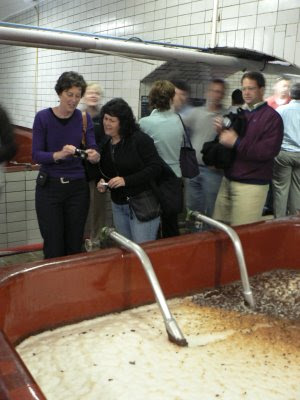 Done with this, the young beer goes even deeper into the guts of the hill to the lagering cellars. This is a very important part of the process. One of the reasons many of the macro lagers are so bad is that they don't spend enough time lagering. It seems that most of them don't spend more than two weeks, actually. Why? Ask the accountants that run those breweries.

Fortunately, that's not Klášter's case. The beers lager for from 40 days for desítka (that's five more days than Pilsner Urquell) to up to 60 days for dvanactká. Yeah, 210hl of cash flow doing nothing productive for up to two months, or at least that is the way an accountant would see it.

We close this part of the visit by drinking Klášter 11°, the brewery's best selling product, tapped straight from the lagering tank. I think that every true beer lover should, at least once in their life, drink a good lager tapped straight from the tanks. It is something so full of energy, it's almost like drinking a living organism. Needless to say, the beer blew the minds of quite a few and it wasn't very easy to make everyone go back to the surface. 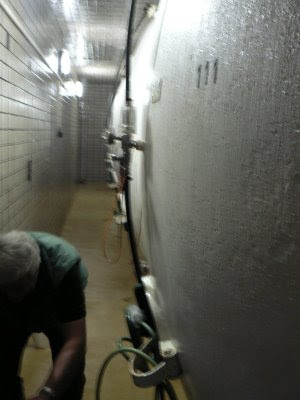 Beers are sold unpasteurised. Before bottling they go through a double microfiltering process that, unlike pasteurisation, it doesn't completely "kill" the beer, but puts it "in a coma".

The second part of the visit, the meeting the group from Boston University Executive MBA Program wanted to have with someone from the brewery's management, was held at the beautiful Skála restaurant. Fortunately, Mr Kábrt, the Business Director, was kind enough to change his schedule so he could be with us. The meeting was very interesting.

As of 1st January 2009, Pivovar Klášter has new owners, K Brewery Trade. This company with Czech capital came pretty much out of nowhere a couple of years ago and started to either buy or invest in several regional breweries. Now they own six and are co-owners in another four. Their slogan is "Navrát k tradici" (Back to Tradition).

One of the first changes the new owners made at Klášter was to start a moratorium on exports. These represented 40% of the sales of the brewery, but K Brewing want to focus on the domestic market, which, according to them, is more lucrative.

The interview left me with the impression that the people from the brewery are quite happy with their new "bosses". It seems that K Brewing gives their breweries pretty much free hand to brew what and how they like it.

This doesn't mean that they are absentee owners, as is the case with several regional breweries owned by foreign companies. K Brewing has consolidated the purchasing system. This is a very important detail. The combined volume for 2008 of the six breweries the company owns was 812 thousand hl, if we add to that the 664 thousand hl of the four breweries they co-own we reach a total of almost 1,5 million hl, 200 thousand more than Budvar. Three words, Economies of Scale, for ten regional breweries.

And it seems they are taking things seriously. K Brewing already has a distribution centre in Prague and the other day I read that Pivovar Jihlava, one of their breweries, will start selling their beers the tanková way. Is this perhaps a "pilot test" that if successful will be extended to the rest of the breweries? Might we see someday a K Brewing hospoda in Prague?