By Pivní Filosof June 29, 2009
I had really liked most of the craft beers I'd had so far from Denmark and Norway and I still wanted to know the ones from the other Scandivanian Kingdom, Sweden.

The only Swedish beers I had seen in my life were the ones sold at Ikea. But since everytime I go to that prison looking furniture megastore I end up in a bad mood and wanting to leave as fast as possible, I never bothered to stop and buy one (which might not be that bad, actually).

Now, thanks to Gnoff, a fellow beer enthusiast from Sweden, this "problem" has been solved. He brought me nine samples from his native land. He was also kind enough not to tell me much about the beers. He said I could find all the necessary information in Rate Beer. You already know my position when it comes to looking for information on the internet before tasting a beer I don't know, and since all the labels were in Swedish, it was almost like a blind tasting. Fantastic!

I started with the only "industrial" beer he brought. Guld Källan brewed by Tomp Beer & Spirits, or at least that is what I thought util I went to their webpage and realised that the company is actually a distributor of alcoholic beverages from different countries. So, I don't now who brewed it (if anyone does, please, let me know) 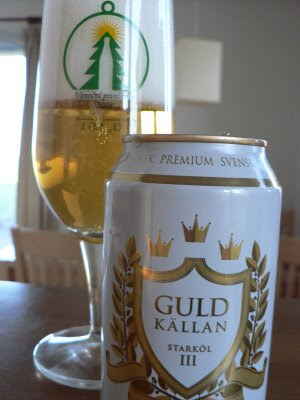 Anyway, I wasn't expecting much from the seemingly mass produced pale lager. It pours a watery gold, with an abundant head that doesn't last long and not much of a nose to speak of. There is some taste, though, and not bad. A bit malty with some bitterness, everything very well brought together. Not a beer that I would eagerly seek, but if I were in Sweden, thirsty and I found it at a shop, I would pick it without any problem. A funny detail, the word "starköl" means, if Google Translate doesn't lie, "strong beer" in Swedish. Quite a relative thing, the beer has only 4.8%ABV. As far as I know (and correct me if I'm wrong), Swedish beers tend to be a lot lighter than the ones we are used to. Silly laws. 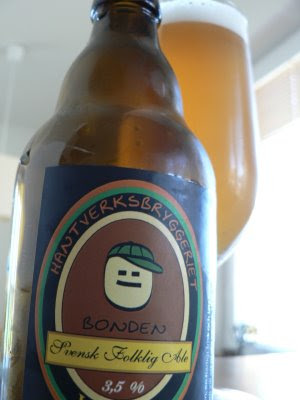 The lightest of all the samples was Hantverks Bryggeriet Bonden Svensk Folilig Ale (try saying that three times in a row) with only 3.5%ABV (could that be the standard ABV for Swedish beers?). It pours intense gold, somewhat cloudy, with a small, yet compact head. Although it isn't very strong, the nose reminds of summer fruit, sweet organges and some mint. The taste is predominantly fruity, but very well contrasted by a yeasty acidity. Ideal to drink while grilling in summer or when getting back home after a hot day. 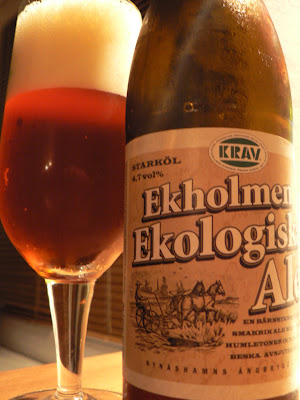 A high step up in the alcohol contents is Ekolmen Ekologiska Ale, with 4.7%ABV and brewed by Nynäshamns Ångbryggeri. As you can very well figure out, it is an organic beer. Both the malts (pale ale, cara munich and crystal) and the hops (challenger, fuggles and hellertau) come from organic farms. Environmental credentials notwithsanding, this is a very tasty beer. Reddish amber, crowned by a thick and spongy head. The nose is almost a mix of pale and weizen, maybe thanks to the hop mix. It's got a silky mouthfeel that fills the palate with fruit, spice and just the right bitterness. Even though I had it a bit colder than recommended on the label (11-13°), I enjoyed every single drop. A delicious beer to savour slowly or even for a session. I see it as a great pairing for something exotic, but not too spicy, or pasta with a tomato sauce with a lot of garlic and herbs. 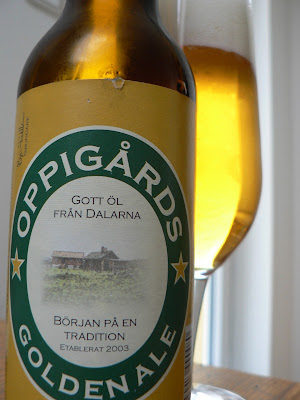 If someone had given me Oppigårds Golden Ale de Oppigårds Bryggeri blind, I would have probably thought that this beer was an attempt at recreating a Czech ležák, but using C-hops intead of Saaz. It looks just like a good Czech pale lager and the maltiness both in aroma and taste follow the same pattern, the same could be said about the mouthfeel. Nothing surprising once you read the ingredients of this 5.2%ABV beer. It's brewed with pilsen and caramel malts, a very usual mix in Czech světlý. The difference, as I mentioned before, is in the hop mix (yeah and the fermentation, etc, I know), a salad of pacific gem for bitterness, EK Goldings for taste and EK Goldings and Cascade for aroma. The finish is full of all these hops and makes a nice contrast. A refreshing beer, very drinkable. 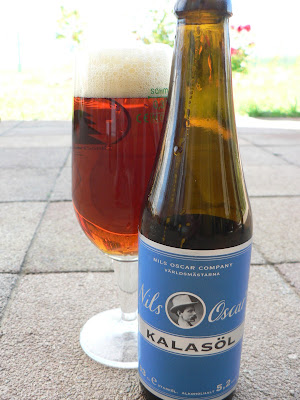 I started then with the beers from Nils Oskar, a renown and successful Swedish craft brewer with a rather large product line. It pours a crystaline ocre. The nose is mostly caramel with fruit, mineral and licorice notes (not as interesting as it sounds, believe me). It tastes mostly dry, not much of an identity or body, and the finish is all too short. Could go well with some smoked meats, otherwise it's kind of boring. As with the previous beer, this one also felt like a lager, it reminded me to your average Czech polotmavé. This one did turn out to be a lager, though. When I finished drinking it I had a look at the back label. My Swedish leaves a lot to be desired, but I don't think you need to be a linguist to figure out what "inspirerat av Märzen" means. In fact, "Kalasöl" means "beer fest" in Swedish. Perhaps if they had used only one kind of hops, instead of the four they did, this beer would have had a bit more of an identity. The feeling it left me was of a beer made because they had to, rather than because they wanted to. 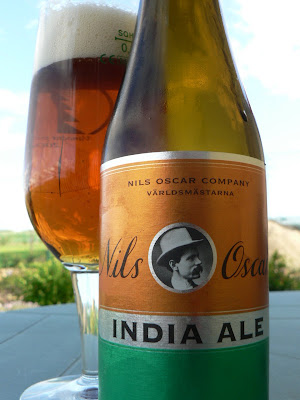 It was followed by India Ale (5,2%ABV). No mystery here with which style inspired this beer. I've had quite a few IPA's lately and I've come to the conclusion that it is the "fruitier" ones that I like better. I find them more interesting than the very hoppy ones. Unfortunately, Nils Oskar's is neither one, nor the other. Pours amber, with a mild bouquet where caramel rules. The taste is missing something, it teases but never gets there and leaves you wanting more, and not in a good sense. Only at the end it seems to gather the courage to say something, but it doesn't quite satisfy. 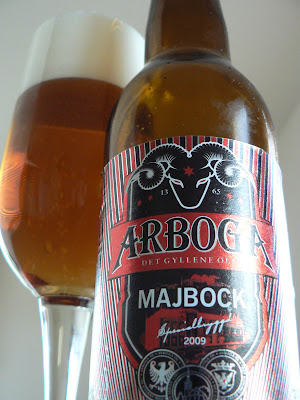 I decided to give good old Nils a break and chose Arboga Majbock (7%ABV), brewed by Three Towns Independent Brewery. It pours a clear intense gold, with hardly any visible carbonation and a generous head. The nose is dry herbal, sage perhaps, with a caramel and apples background. So far so good. Then comes the first sip and my palate is punched by an etilic fist that leaves an aftertaste akin to cheap vodka. As the glass empties the alcohol integrates better, but the damage is done. I wonder if I didn't have this beer too young. The 2009 written on the label seems to imply so. 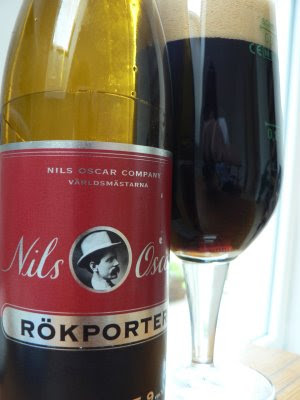 I still had one from Nils Oskar, Rökporter. This was the only beer I had references about. Evan Rail had reviewed it in his blog. Unfortunately, the post is lost, but I do remember he liked it. Regardless of the references, I really wanted to drink this beer. I am a big fan of smoked beers. Rökporter is very dark. You can already feel the smokiness in the bouquet, though it is a bit less "hammy" than your average Rauchbier from Bamberg. The taste is a wonder of balance. One of the things I've always liked about old reggae bands is they way that, despite the technological limitations of their record studios, they managaed to make every instrument heard on the records. That is exactly what happens with this beer. It's dry, there is chocolate and there is the smokiness that now tastes more "woody", everything is felt at the same time, but not on top of each other. The finish is mild, with sweet coffee and some sourness to make it even more interesting. A delicious beer, the kind that you regret finishing if you don't have another one at hand. 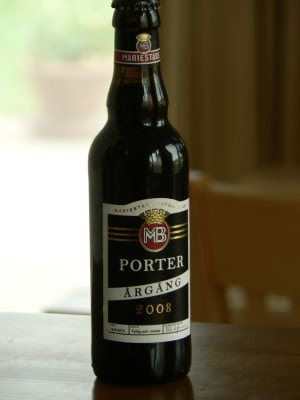 I still have one left, MB Porter årgång 2008 (vintage 2008), from Mariestads Bryggeri, a brand that belongs to the Spendrups group. I've decided I won't open it now. I want to age it, unless someone tells me it's not worth it.

The overall impression is a bit mixed, there were a couple beers that I liked a lot, and others that I didn't like at all. If I had to, unfairly, compare them with their Danish and Norwegian pairs, the Swedish ones are a step or two behind. Anyway, thanks again to Gnoff for giving me the possibility of tasting beers that otherwise I would never have.