By Pivní Filosof April 29, 2009
It's already old news, but when it was announced it was something that flew below my radar, never managing to fully catch my attention. It wasn't until it was mentioned in an e-mail I received the other day that I started to think about it, and then seek some information on the matter.

Last Autumn the European Commision authorised the Czech Republic the use of the Protected Geographical Indication "České Pivo" (Czech Beer). Which was the successful culmination of several years of work by the Czech Ministry of Agriculture (or so they claim).

As of that day, only beers brewed within the borders of the Czech Republic could be denominated as "Czech Beers". That means that, say, an Estonian brewery will not be able to come out with a product called "Tšehhi õlu". We can rest assured of that.

That's good news, isn't it? After all, every beer brewed in my adopted country will be automatically eligible to receive the "České Pivo" label. Right?

As with every other PGI there are conditions. In this case, brewing methods must be the "traditional" ones. To be "České Pivo" a Czech beer it will have to be brewed using decoction mashing, double fermentation (a primary one, and the secondary one at low temperatures), etc. That means that if someone wants to recreate an old Czech recipe: top fermented, infusion mashed, etc., as it was done pretty much until the 19th century, the product will not receive the "České Pivo" denomination because it won't be traditional enough. It seems that the people that prepared the application believe that nobody brewed beer here before 1842.

There are also conditions regarding ingredients (we aren't Reinheitsgeboting here, I hope). To get the PGD label the beer must be brewed with a certain minimum of Czech hops and malts. Why a minimum? Why not 100%? How much are those minimums? And what is the point of such a half assed condition?

But things start getting close to the realm of idiocy with the ABV limits. Only beers that have between 3.8 and 6% ABV can be denomiated as Czech Beers (it is curious that this speaks in ABV when, traditionally, Czech beers speak in Balling degrees). Today there aren't many respectable beers with less than 3.8% ABV, but in the past they were very popular, of good quality and the ones usually drunk at home before bottles became widely available, something like the English "Table Beers". Yet the worst of this is that the upper limit automatically leaves out pretty much everything that is brewed at higher than 14° Balling, among wich are some of the most interesting and appreciated beers in this country, for instance Vyškov Jubiler, Primátor 16%, Jihlavský Grand, Master 18% and Pardubický Porter (brewed since 1891), in fact, the whole traditional Porter category (dark beers brewed at at least 18° Balling) is disqualified.

So far there hasn't been too much interest by the breweries. SAB-Miller has said that they won't request the label for their Pilsner Urquell, I don't think they need it, but the actual reason seems to be that having the label could put the brand into a marketing conundrum. PU is also brewed in Russia and Poland. Wait a second! Weren't the Russian and Polish Pilsner Urquell supposed to be only to satisfy the demand of those respective markets? They will request the label for Gambrinus, though (of course, brewing at 13° Balling and then diluting the result in order to sell it as two different beers is something very traditional indeed).

Budějovický Budvar has said that since they already have their own PDG, they are naturally not intersted in the "České Pivo" as they consider it redundant.

If neither of the best known Czech beers in the world will carry the "České Pivo" label, why is it good for then? Oh! Yeah! So Holba, one of the worst beers in this country, can proudly claim that they are a true "Czech Beer". The PGI label for a fourth rate beer, brewed using glucose syrup (what more traditional than that?) is all fine and dandy, but for a really fine brew of 7.5%ABV? Oh, no! We can't allow that to happen.

I would like to know how much of the public funds was spent lobbying the European Commission, and how much more will be used for future advertising and PR campaigns in order to promote this kind of stupidity. 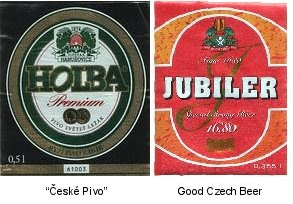 Right now I am going down to my "cellar" and will put a Jubiler in the fridge. "České Pivo" it might not be, but it certainly is a bloody good Czech beer.