By Pivní Filosof April 17, 2009
Several times I've been asked what was the best beer that I've ever had. I always answer with the following parable:

In September 2004 we wento for holidays to Crete, where we spent two wonderful weeks. One of the trips we made was to the Samaria Gorge, in the Sout West of the island. The only thing that can be done there is a 16km hike that starts at 1700m above sea level and ends pretty much by the sea, all on quite rough terrain and surrounded by impressive natural beauty. It was a great day. 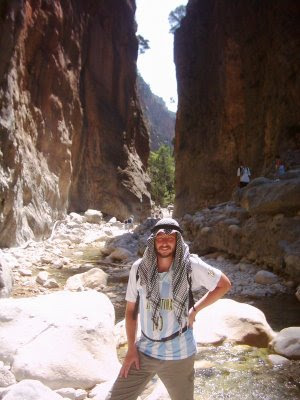 The author looking cool in Samaria
Right at the exit of the national park there is a kiosk selling snacks and drinks, beer among them. After having walked so much you can imagine that I couldn't resist having a draught beer. It wasn't that I was dying of thirst, in the park there are spring water fountains a couple of hundred meters from each other, and we had also brought drink and food with us, still, I fancied that a cold beer would do me just fine.

I'm not sure which beer it was, maybe the German Holsten or the Greek Mythos, it doesn't matter. What I do remember is that it was served the Greek way, bitterly cold and in a tankard that was taken out of a freezer. Whichever it was, I don't think it's a beer I would very happy to drink under other circumstances, but at that moment and place each cell in my tired body enjoyed it ecstatically. Never had a beer tasted so good.

Spring has started in full swing. Everything is blooming and sprouting, temperatures have become very pleasant, the sun seems to be shining more than ever and the girls have finally left their coats at home. It must be my favourite season in Prague. But this also means that forced labour in the garden must start. I hate physical work, always have, always will. But like many other unpleasant things in life, there is no point in complaining, you just have to accept it.

And so it was that after a whole day of hard work, when the sun was already checking out until the following morning, I went to the fridge to fetch a very deserved beer that I would drink on the terrace. I had a Svijany chilling since the morning, but it was one of the last two bottles of Porteňa what ended up in my hand. 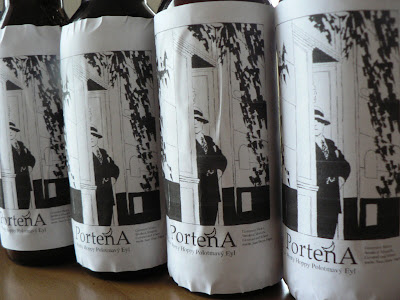 That first sip was magic, it made me feel so good. As I emptied the glass my muscles started to loosen up and the pain slowly went away (only to come back later). And that way, very slowly, that bottle of Porteňa became the best beer I've had in my life.

The point is that many times the quality of a beer greatly depends on the circumstances and the moment. What made the above mentioned beers so great was that feeling of reward, with Porteňa, of course, having the added value of being my beer.