By Pivní Filosof April 16, 2009
I really like Pardubický Porter, it's one of the best strong Czech lagers and, for those who pay more attention to styles than me, a very good example of the Baltic Porter style. It's a pity that this beer is so hard to find here in Prague.

Apart from Pivovarský Klub and Zlý Časy there are two other places that I've discovered almost at the same time that offer it on a permanent basis.

Both are cafés, both are small, both are in Prague 2, both metres from streets with a lot of traffic of all sorts, both near the centre and yet, they couldn't be any more different.

Cafe 89 has all the looks of a modernish Prague neighbourhood café. The service is informal and unpretentious. The music is your typical McRadio, which for me takes away much of the atmosphere. The furnishings are the usual out of a catalogue for bars and restaurants, not ugly, just adecuate and comfortable enough. The nicest thing of the place is its vaulted walls and ceiling with exposed bricks (though, I must add that the paintings hanging from the walls were pretty ugly).

I picked a table by the door, took the menu and got a bit afraid when I didn't see Pardubický Porter on it. I still ordered it, after all I had seen its sign outside. At first the waitress didn't know what I was talking about, might be because sometimes my Czech is not as good as many believe, or that they don't serve the beer all that often. Anyway, the beer was brought. While I drank it I couldn't fail to notice how everybody, staff and patrons, seemed to know each other for a long time. This made me feel a bit ouf of place, to be honest. I don't see it as a shortcoming of either place or service, it's just one of the reasons the regulars choose this café and a new comer will to accept that or go somewhere else. 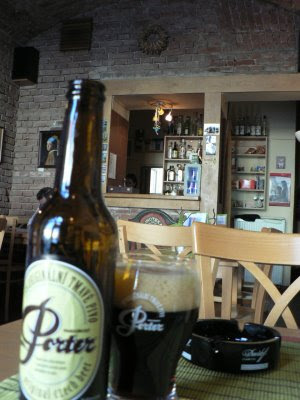 After finishing my beer and paying the 32CZK owed for it, I left and started wondering how could I define Cafe 89 in just a few words. After a couple of blocks, I realised that it was the kind of place I would welcome if I had it around the corner, but that otherwise I wouldn't bother to visit. In fact, if it hadn't been for the Pardubický Porter sign, I wouldn't have given it a second look. Cafés like this one there are many in Prague.

The other place, though, is a true gem. As the previous one, I found it by chance and I also noticed it thanks to the Pardubický Porter sign by the door.

Al Cafetero must be pretty much the same size as Cafe 89, but with a better layout. Instead of being long and narrow it is wide and the whole room is by a huge window that lets a lot of light in. It also has a lot more atmosphere. No McRadio, lounge Jazz is the sound track here and much of the furnishing consists in sofas and armchairs (I love sofas and armchairs in cafés) 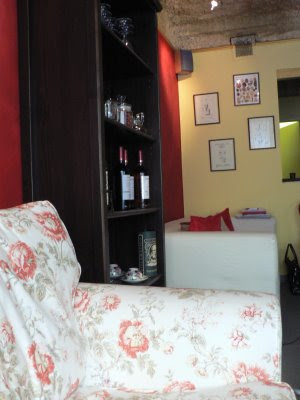 I was lucky when I visited it, one of the sofas by the window was free. I took off my jacket and a lady offered to take it to the hanger, something I had only seen at very posh restaurants here in Prague. Pardubický Porter was here on the menu (there was also a gift pack displayed on the bar) together with Žatec Xantho, both in 33cl bottles, both at 39CZK. I ordered a Porter, which was brought with and ad-hoc glass, just like at Cafe 89. 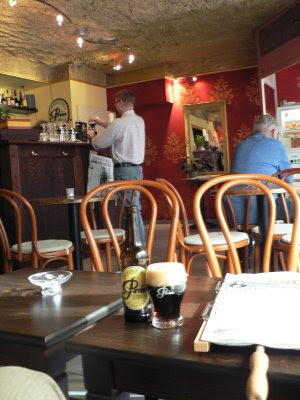 Sitting in that comforatble sofa and sipping my beer I saw a tray with medovník pass before my eyes and couldn't resist ordering a slice. It must have been one of the best medovník I've ever eaten, with plenty of nuts and the right sweetness. If my Porter had been at room temperature, I think it would a been a very good pairing for the cake. 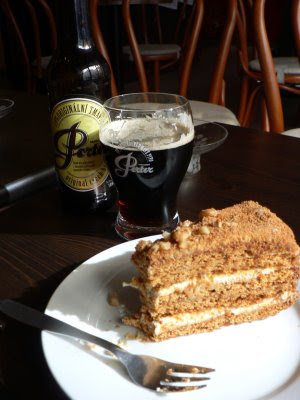 45 minutes later, when I finished reading what I was reading, I paid and went to meet Evan Rail for a luxury lunch at Celeste, paid by the New York Times. While I strolled under the sun in the still chilly spring weather I thought about how much I had liked Al Cafetero and that I was sure going to go back soon.

And so I did. This time not for a beer, but for a cuppa. One of the things that had caught my attention during my first visit was the "vaccum tube", a coffee making system that I hadn't seen in ages and that, according to its owners, Al Cafetero is the only place that offers it in Prague. 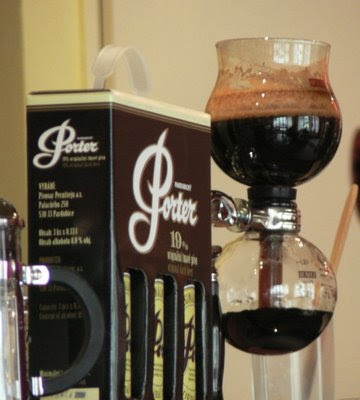 The friendly lady who took my order was careful to explain me how the system works after letting me choose between organic coffee from Guatemala and Ethiopia. When the coffee was ready (something that is kind of interesting to watch)  she described the characteristics I should expect to feel from it.

Being an espresso person, I was not all that impressed at first, but by the second cup the aromas and flavours started to express themselves with more energy and by the time I finished they had completely invaded me without overwhelming me. What a great cuppa!

The 75CZK price tag almost made me go for an espresso, but curiosity won over financial sense and in the end it was good business because the serving is good enough for 3, maybe 4, cups and it can be shared. 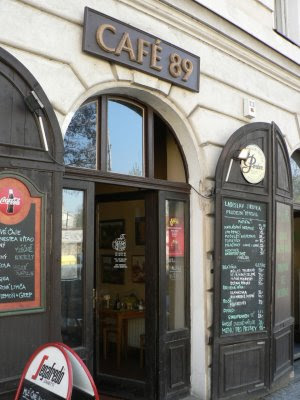 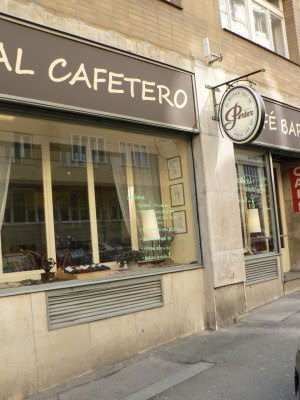