By Pivní Filosof March 21, 2008
More than a style Rauchbier is a whole family of beers. Typical of the German city of Bamberg, they are rather unknown and, for many, an acquired taste. For something more detailed about this fascinating beers, read the the very good post that Evan Rail wrote for his blog.

A couple of weeks ago some bottles from Bamberg appeared on the shelves of Pivovarsky Klub. I've been told that someone who goes to Germany and brings a few cases is the person we should thank for being able to taste these most interesting beers (which tend to dissappear very quickly).

I had my first contact with them about a year ago when someone gave me to taste a glass. I was impressed. Since then I was only able to drink kouřové pivo, from Chýně, not the same, but still very good. This time, when I saw the bottles, I didn't hesitate and picked a Rauchweizen and a Märzen Rauchbier. I wanted to taste them with a more critical eye than that first time. 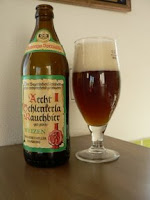 I started with Rauchweizen because it was the one I wasn't acquainted with. I didn't know what to expect and I was very curious. When pouring it we have a dark amber beer, cloudy, topped by a very white, spongy head. The nose reminds of smoked meats without salt, supported by notes more typical of a weizenbier. For someone who has never tried these kind of beers, the characteristics will be intriguing and will require more than a bit of an open mind. I liked it a lot when I drank it. I found it quite complex. The taste is sweetish, with some banana and spice notes. The smoked element is felt only before the finish, which is long, but not very intense, and leaves a pleasant acidic aftertaste that reminded me that of green apples or some wild berries. The smoked flavours never get to dominate the palate, in fact, they are mild, which makes this a very good option for those who want have never tasted beers of this family. Going for more extreme ones could generate rejection, and that would be a shame. 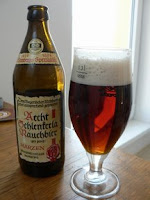 The Märzen was the one that had impressed me so much a year ago. Apart from looking more "filtered", there is very little difference with the Rauchweizen. The difference can start to be felt on the nose. What rules here is the scent of very good quality smoked fish (maybe marinated with herbs) that leaves very little room for anything else. Smoked fish might not sound very appealing when describing the nose of a beer, but believe me, words don't make justice to the sensation. Once in the mouth, the smoked malt is not as intense as expected. I felt slightly caramelised sweet fruit with an intense bitter finish. The smoked flavours are always there, hanging in the back as if wanting to take over the palate, but never managing to do so. Actually, the smoked taste was milder than I remembered from last year (maybe it's due to what Stan Hieronymus, from Appellation Beer, comments on Evan's post, about the variations that these beers experiment through the year).

There are some more extreme Rauchbier. I would love to taste them some day. These two are among the most acceptable for the average drinker, though they still demand some flexibility of tastes. I would definitively not recommend them to those who only drink Eurolagers served at artic temperatures.