Close to the heart

By Pivní Filosof March 19, 2008
It's sometimes difficult to remain objective. Those who know me are aware of my warm feelings towards Pivovar Svijany. It was then with joy that attended their presentation at Pivovarský Klub.

I had some illusions that they would be presenting something new and surprising, but I wasn't expecting much, actually. Still, I was looking forward to sampling three of their products for the first time.

The event was mostly hosted by Svijany's brewmaster, Mr Petr Menšík. I liked him. Other brewmasters I've seen at these events tend to be very serious, almost like a lecturer at university. He just sat there talking as if we were his mates at the pub, and at times being rather combative (the shots aimed at the big brewers). All while he talked about the history of Svijany. In 1997 Pivovary Praha (now Staropramen, then owned by Bass & Co.) had signed the brewery's death sentence. Svijany would have suffered the fate of several others, had it not been by their current owners that bought it and saved its life. In 1998 the output was 30,000hl, today it's almost 300,000hl, it is the leader in the market in the Liberec Region, and its presence in Prague and other parts of the country is growing day by day. All while doing everything possible to keep the quality of their products.

The most interesting thing that Mr. Menšík told us, however, was a very little known bit in the brewery's recent history. Four years ago Svijany bought Pivovar Malý Rohozec, which was almost bankrupt then. The idea (at the beginning opposed by Menšík) was to take advantage of the proximity of this brewery to shift some of the production to their facilities because those at Svijany were becoming too small. They had thought of terminating the brand, but an attack of conscience made them change their plans. They didn't want to be like others and kill yet another Czech pivovar. In the end the facilities were modernised and the people of Rohozec were given free hand to make their beers the way their felt like, which is appreciated by all, since those beers are really good. 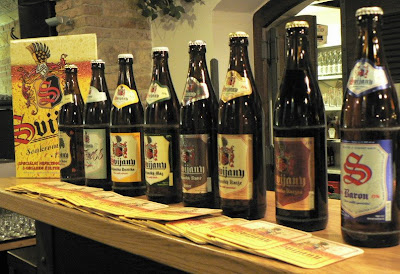 The tasting started as always with the lower end of the alcoholic spectrum, and those were the three I had never tried.

Svijanksá Vozovká, the nealko, didn't impress me the least. It is jointly brewed with Platán and I don't think it's too good. I've had several others that were better.

Svijany Fitness is a product that, on the one side tries to bring back the lehké pivo (light beer), those fermented bellow 8°balling and with a low ABV; and on the other, to attract people with "healthier" lifestyles. Lehké pivo were in the past something like "table beers" and they seem to be having some sort of comeback. A funny thing about this beer is that by calling it Fitness, Svijany was forced to print a nutritional chart on the back label, describing the contents in vitamins, minerals, etc of the beer (brewed at Rohozec), which are basically present at pretty much every properly made beer. I don't think this beer will make me change my ways, I didn't like it too much, saccharine is listed as one of the ingredients, and certainly does not give it a good taste. I was expecting more.

Now, Svijanská Desítka was a very nice surprise. I'm not able to tell why I had never drunk this beer before, but I sure regret it now. I would say that it's the ideal session beer, tasty, but not too much, nice mouthfeel and character for a desítka, and it's one of those that goes down so easily, almost like water. Very nice and refreshing. I should try getting drunk with it.

The rest, Svijanský Máz 11°, Svijanský Rytíř 11.5° (though it can be more), Svijanský Kníže 13°, Svijanská Kněžna 13° (the dark one, which I wish didn't have artificial sweetener), Baron 15° y Kvasničák are beers that I drink more or less regularly, either at home or at a couple of places. One of the most remarkable things about these beers are how different they are, and I don't mean from others or from each other (which they are in both cases), but how they change each time I drink them. The bottled Rytíř that I sampled at the event was completely different to the one I drink at home. Some people will say that beer should be always the same, I don't agree. I believe that, as long as the beer is good, it doesn't matter that each batch is different (within a certain range of course). If wines change with each vintage, why can't beers do the same? Or is it that we have become so used to eurolager uniformity that we can't accept something that isn't always the same.

However, to me, the most important question is what kind of future awaits Svijany. Will it become a victim of its own success? Due to their current volume Svijany is now legally considered a big brewery, and so, they must pay 100% of the beer tax rate (the system is that the smaller the brewery the lower the rate levied on their beers), will that make them raise their prices? Will they be able to somehow keep their quality? (everybody knows that once the volume goes beyond a certain level, problems start to appear). Or, will their success open the doors to other regional breweries and shake market a bit for the big players? Whatever the answers are, I just hope they will be able to keep on making good beers.

Unfortunately, this time I didn't have time to talk to the people from the brewery, which I would have really liked, but other commitments made me leave the evening shortly after it had finished.