By Pivní Filosof March 30, 2008
Before going into the tasting notes, it is worth telling the story of how a couple of samples of Alhambra Reserva 1925 got to my hands.

I've said it many times, one of the nicest things about blogging is the possibility of exchanging ideas, things, experiences. Francisco and Bea, from Granada, Spain, are readers of my Spanish blog who had found it thanks to the forum Los Viajeros. They contacted me to make me a very surprising offer.

Due to a health problem of the people that were going come to Prague with them, they were left with two tickets to the Opera that could not be refunded, so they decided to give them good use and invite me and my wife to go with them.

Philistine as I am, I had never been to the Opera (despite having lived here for six years), but I was curious. So I didn't hesitate to accept the invitation.

To make it short, we had a great time. We had dinner at the Klub the evening before and we both found Francisco and Bea very nice and fun to be with. The Opera we saw was La Traviata, and I must say that I liked it. Yes, there were a couple of moments when I thought I would fall asleep, but it was still a very interesting experience and I would love to go back some day.

After the show, when we were saying our goodbyes, Francisco and Bea gave us two bottles of Alhambra 1925.

I remembered having read a review of this beer in Logia Cervecera (Sp), but not what was their impression about it. I decided not to read it again because I didn't want my expectations to be affected by the judgment of the Logia (which I respect deeply).

Regarding expectations. It is interesting, my experience with Spanish beer is limited to a handful of samples that didn't have a good impression on me. Is inevitable that such thing would affect one's expectations by lowering them. The same effect has the fact that Spain is a country with only an incipient beer culture. On the other hand, the name of the beer Alhambra Reserva 1925 and its bottle (one of the most beautiful I have seen) make you expect a bit more, at least than the Spanish average. 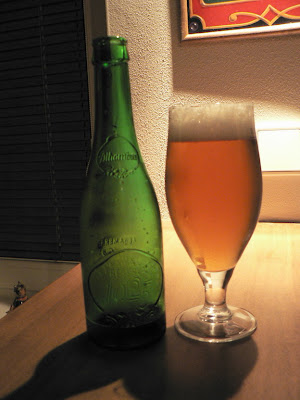 As I've said, the bottle is beautiful, like something you can see in an antique shop or a flea market. Makes you want to keep it as a collectible. It can be read on it that the beer has 6.4%ABV and that corn is among its ingredients. Here is where some doubts started to pop up. This cereal was not part of the original recipe, so I don't think it was added in order to give the beer some special character, but to cut some costs. Which is almost unforgivable considering that this beer wants to be something special. Trying to put that behind, I went on to taste it.

When pouring it we see deep golden almost amber colour, with cava-like bubbles. In the nose I felt honey notes with some touches of whipped cream and a bit of alcohol. It has a nice mouthfeel, though the body is a bit lighter than I expected (can it be the corn?). The predominating flavour is mild caramel, almost like mixed with milk. The finish is short and dry. Halfway down the glass I started to feel the alcohol as if trying to catch up with the rest.

All in all, Alhambra 1925 met my expectations, but just barely, a few "points" were lost due to the presence of corn. If I was in Spain, I would gladly drink it. It is well above the industrial average. However, I didn't make me a fan.

Anyway, together with my better half, I want to thank Francisco and Bea for bringing this beer al the way here and, more than anything, for inviting us to the Opera and having such a good time together. Best to both of you!!!