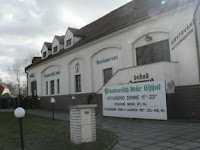 Located 10 minutes by bus 347 from that abomination that is Zlíčin, Pivovarský Dvůr Chýně u Prahy is a treasure, and it's one of my favourite places in the world.
Among the average consumer, their beers are virtually unknown, but ask some real beer lover and their eyes will roll while they utter sort of compliments.

I try to go there as much as I can. When I have a long break between clients and the bus schedule works on my favour, I go for lunch. But not the restaurant, I go next door to the pivovarská krčma. There are a couple of reasons. First, the restaurant has the atmosphere of a waiting room, other than the kettles that dominate the room, it is cold and impersonal. Second, the price of the beer, 40CZK for a pint. The krčma, on the other hand, is small and cozy. The menu is written on blackboards hung next to the door. The benches have sheepskins to sit on and there is a fireplace with a rocking chair in front. Oh! And the beer, the same one as at the restaurant, goes for 20CZK a pint. During the week they offer a lunch menu for 60CZK. It consists on a big bowl of soup a generous main course that always tastes really home made (they have their own smokehouse) and a piece of homemade cake or pastry. Basically, you can get stuffed for 100CZK. 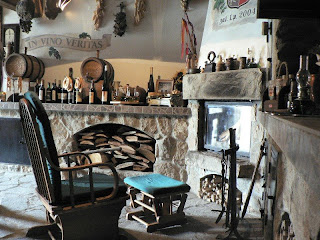 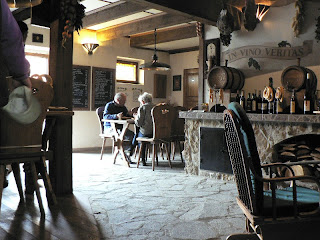 I've also tried a couple of things on the regular menu, like the homemade lamb sausage (jechněčí klobása) and all is of rather surprising quality.

On my last visit a couple of weeks ago I got a bit scared when I saw on the blackboard outside that there was no electricity. Thinking that I would have to turn around and go back to Prague, I still pushed the door, which to my relief and happiness opened. It was a planned outage and they cook was prepared for it.

The small room was eerily quiet, there were candles everywhere and the only window barely let some light in. The cook came put a massive bowl of soup in front me and apologised by saying that only guláš was available that day. Not minding at all, I concentrated on my soup. It was cibulačká (onion) that had a tad too much salt, but still did the job quite well. The guláš, though, was simply perfect. A very big portion, with some slices of potato and cubes of smoked bacon. The beef almost melted in my mouth, but still had some chewiness in it. And the sauce! Oh! That sauce! Perfect thickness, started on the sweet side, then the spiciness would build up, enough to make my eyelids sweat, but not to obliterate my tasting buds. Aided by three thick slices of fresh chleba (rye bread), I left the plate sparkling clean. 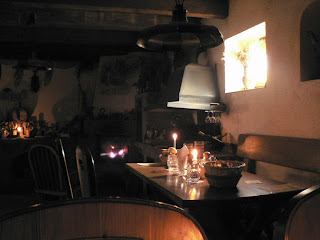 As usual, the first beer I ordered that day was their výčepní. Brewed at 10°balling and finishing at a modest 3%ABV, I was afraid that this unfiltered golden lager would be rendered useless by the guláš. Far from the truth. What an amazing beer this is. Most desítky I know, and not few stronger ones, too, would balk at the task of pairing with that stew. Not the one from Chýně. Not only did it accept the challenge with gusto, but put up quite a fight, to the point of threatening to dominate my sense of taste. Its short and refreshing finished cleaned my palate, readying it for another spoonful from the plate. It was beautiful. 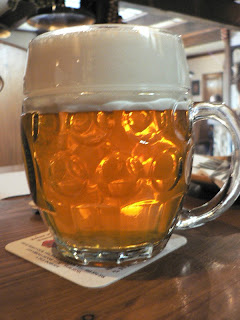 And it is truly an amazing beer. As my good friend Evan Rail told me once "It jumps from the glass". It's got a thick almost "guiness-like" creamy head. Very fruity aroma with mild vanilla notes and some hints of butter. Almost without carbonation, it has an unctuous mouth feel, that at the same time isn't thick. The flavours have notes of peach and pears, and very subtle mint notes. Despite its low alcohol it's got a character that many much stronger and fancier beers would kill to have. It's one of my favourite beers in the whole world. It is great as a thirst quencher or session beer, I would die happy if it was the only beer I could drink for the rest of my life; pairs very well with many foods and you can even sit down and enjoy it sip by sip. 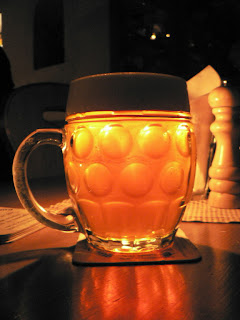 The rest is not far behind either. When I when there last, they were tapping poltomavá dvanactká and tmavá čterenactká. The former is a dark amber fermented at 12°balling has a herbal nose and a nicely complex taste, with bitter herbs balanced by pleasant caramel and honey notes. The latter is a thick dark beer that almost absorbs the light. With lovely sweet coffee and roasted cocoa nose. When drinking it, coffee is what dominates at the beginning, giving way to caramel. The finish is almost like a strong espresso. Simply gorgeous! 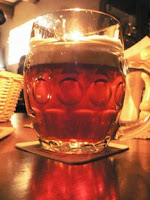 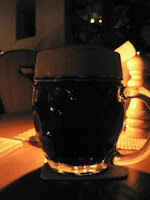 They have more, like the beautiful jedenatcká, brewed with a wheat adjunct and other specialities such as kukuřičné pivo (corn beer), zázvorové pivo (ginger beer) and kouřové pivo (smoked beer). I've been particularly impressed by the ginger beer and, to a certain extent, by the smoked one, specially draught.

All beers are available in 1.5l PET bottles at the restaurant, the price 45CZK. Not too bad for something delicious to drink with dinner.

Unlike Beroun, Chýně will not make it for a day trip. There is nothing to see. But, believe me, you will not want to go anywhere else once you start drinking their beers. 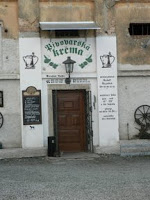