On Prices and an Impulse Purchase

By Pivní Filosof October 18, 2017
There I was the other day, approaching the stand Letající Chroust had at the farmers market in Jiřího z Poděbrad. I was in the kind of good mood you get after having five pints and a fun chat at the pub. My intention was to get some of their Světlý Ležák (Czechs believe that, since we have two legs, you shouldn’t drink in odd numbers and I’m in no position to defy popular wisdom). As the girl as the stand poured it (the beer was really solid, BTW), I noticed a bottle of Černé Cucu, a Barley Wine with black currant Letající Chroust brewed with Pivovar Zichovec, and told the girl that I wanted one.

My heart might have skipped half a beat when I was told the price, 180 CZK, but I was in the kind of good mood you get after having five pints and a fun chat at the pub and I took it. On the way home, however, I wondered whether that wasn’t too much of a 0.75l bottle of domestic beer?

I know I’ve been nagging a lot about prices lately, but I want to make clear that I have nothing against expensive beer per se. I understand that breweries are businesses that want to maximise their profit and it is undeniable that Craft Pivo is very trendy right now, and since prices will always be as high as the market will allow, brewers (and bars) are doing what’s natural, trying to see how far up they can push the price ceiling, and they can hardly be blamed; I think I would do the same if I were in their position. So, price is not the problem, value is, a highly subjective parameter. In my case, since I’m not a ticker or a novelty chaser, the beer, the beverage itself, must stand on its own two feet and be able to defend its own case, and the higher the price, the harder the beer’s case will be. There’s another factor that I take into account: What else can I get for that same money. To put it into perspective, for 180 CZK I can buy seven bottles of Pardubický Porter, that is 3.5 litres of a great beer with a similar ABV %, and I’ve had some really good domestic wines in the same price range. The thing is that often with expensive beers (or with beers with prices that are higher than their relative production costs would warrant, like Kellerpils in Továrna) I don’t feel I am getting my money’s worth and I’ve become wary of them. 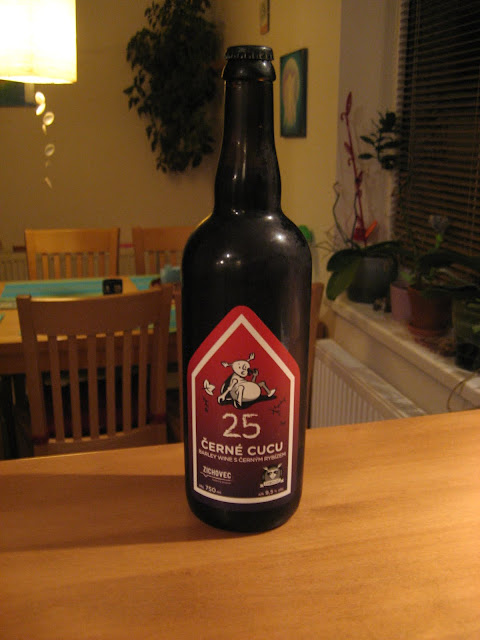 But what about Černé Cucu? I don’t give a hopping fuck about the the unconventional ingredient. Even if they showed me that the use of black currant had such an impact on the costs that the beer could not be sold for lessi I wouldn’t care as that has no effect on the value of my time and money; and for that money, the beer had better be mind-bendingly good not to disappoint. Equipped with a chilled earthenware mug and some nice music I set myself to find the answer in the only possible way.

Other than its colour appeared to be mahogany as I poured and that the head tan and compact, there’s not much I can tell you about the looks of the beer. I don’t have much to say about the bouquet, either, other than it somewhat reminded me of Manzanilla Sherry or a wood-aged white wine, but don’t take my word for it. The currant is front and centre and it’s clear they haven’t used any syrups or extracts. The tartness of the berries at times threatens to turn sour and fuck everything up, but fortunately they are resting on the ample, bosom of a matronly Barley Wine that effortlessly manages to keep things under control. The finish is long and slightly acidic – it brought memories of some good young red wines I’ve had – and leaves an aftertaste that almost forces you to lift the glass again (or, in my case, the mug), and yet you don’t feel urged to chug it; the base beer has the effect of sitting in a rocking chair by the fire, you want to take it easy. It’s a remarkable contrast that keeps a precarious balance, you almost expect the whole thing to fall apart with every sip – the currant escaping the embrace of the barley wine – which makes the beer quite fun to drink, even a whole bottle of it – especially a whole bottle, I doubt anyone’d be able to appreciate this with only a tasting sample – because nothing ever gets loud.

There’s no point beating around the bush, Černé Cucu is a great beer through and through. Was it worth the price? Yes, definitely. No regrets about buying it. Would I buy it again? Yeah, maybe. In the right mood I could see myself getting another bottle. Has it changed my views on expensive beers? No. My limited time and current drinking habits have made me prioritise certainty above anything else, which has turned me into a more conservative consumer, and the truth is that, if I’d noticed the price before, I would probably not have bought this beer. Yes, I would have missed on something outstanding, but there’s plenty of that around, and much cheaper, to care.

Anyway, if you see it around, do give it a go.