For her thirty-tenth birthday, my wife had decided that having a party at home was a lot more hassle than she could be arsed with. Instead, she said she wanted to go on a day-trip, just the three of us (plus the dog). The place had to be somewhere close enough, where we hadn't been before—at least not with our daughter—and where we could do something other than sitting all day at a pub (much to my chagrin).

Prachovské Skály checked all the boxes. This national park in Český Ráj, near Jičín, is a bit over an hour and a half away by car from where we live; we had been there once, but almost 10 years ago, with my parents in law (not what I would call a basketful of fun), and it had a few other interesting spots nearby.

It was raining when I got up early in the morning, and the forecast for the rest of the day wasn't encouraging. However, by the time the rest of the family had woken up, the sun was politely telling the clouds to bugger-off, and the weather ended up being almost perfect for what we were set to do.

It was a nice drive, that got nice the closer we got to Český Ráj—the Czech countryside is gorgeous, especially this time of the year. We left the car near one of the entrances to the Prachovské Skály National Park, it was about 11.

It might have been because of the weather in the morning, but there weren't many people, and we had some of the most impressive parts of the park all to ourselves—it was amazing, almost magic. 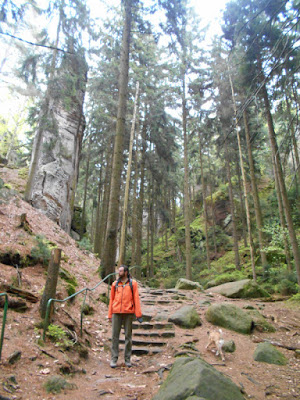 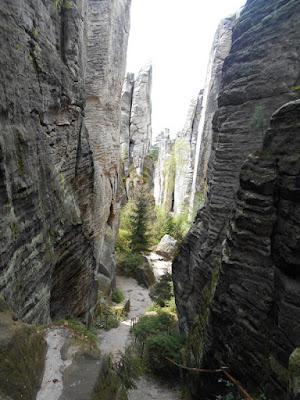 We ended the first leg at Turistická Chata, where we were greeted by one of the features that bothers me the most about this country (though I'm sure is not an endemic one): a place that could be turned into a fantastic Franconian-style beer garden, a destination on its own, but what you get instead, thanks to the symptomatic notgivingafuckness of the operators, is a tourist trap selling over-priced, prefabricated junk food and dodgy beer in plastic cups. I've found the same crap at Křivoklát, the summit of Říp, and a number of other attractions. 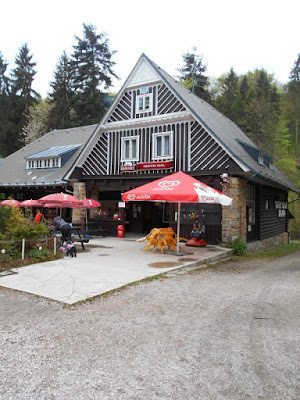 To be fair, though, Turistická Chata turned out to be a little better than looked at first. There was of course the smažák and chips, and other similar stuff most likely sourced from the frozen aisle of the nearest Lidl, but my wife was very happy with what she got at the new pancake bar that had recently opened, and the beer was a lot better than it's the norm: Březňák 10º, in plastic cup, but fairly well tapped and in top condition—I had two to make sure. 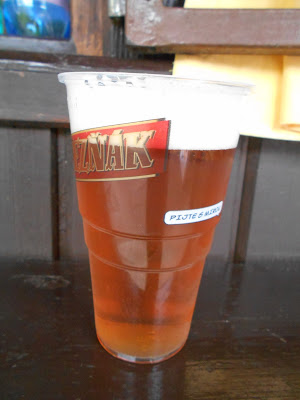 The same can't be said about the beer garden near the other entrance, where we had left the car. The beer, Nová Paka (note to self: I need to drink Nová Paka again), was served in a glass mug, but that was the only good thing it had going for it—it wasn't well tapped and the operator of the place doesn't seem to believe the importance of cleaning the dispensing lines. I swear to you, I didn't mind not having time for a second one. 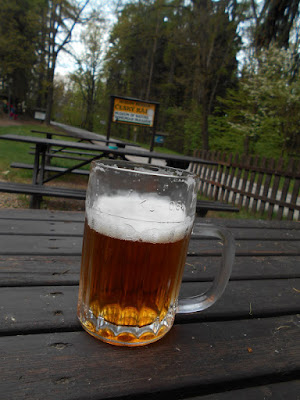 It was still early, we had planned to go somewhere for tea, but stopping at couple of other places was a more appealing option for the missus, and since she was the birthday girl, I was happy to oblige.

Humprecht, in Sobotka, was the nearest spot. It's a small château with a very unusual round shape, that was used a hunting lodge by some rich people in the distant past. Really nice. We didn't go in though, but we unleashed the dog for the first time that day—she was really happy—and walked around the pretty forested area that surrounds the building. We didn't stay long, there was no restaurant or beer garden in sight (or was there? Staroprmen sign, nevermind).

On the way the car my wife remembered that Kost was very near, a handful of kilometres away. We could go have a look, she said. Good idea!

Kost is an impressive castle that has retained most of its original Gothic design. Unlike most other castles, it's not located on a hill, but in a valley, and yet, it is said that it was never vanquished. 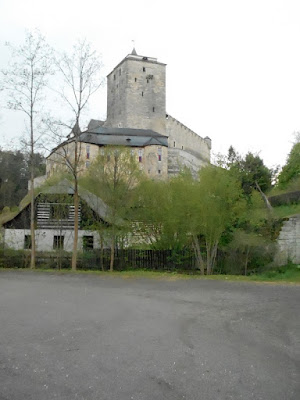 We left the car almost at the foot of the castle, next to a fairly nice looking beer garden with Rohozec on tap (that's another beer I haven't drunk in a long time!). I instinctively gravitated towards the beer garden, but my girls were having none of it. Perhaps I could squeeze a quick one once the sightseeing was over, I told myself. I would forget all about thanks to what we found within the walls of Castle Kost.

With the castle tours closed for the day, there didn't seem to be any activity, but the gates were still open and we walked in.

On the left side of the gate there is a building that houses the gift shop and box office. I spotted a few tables at the far end that looked nicer than what usually find at places like this. Naturally, I headed straight there, while my wife and daughter looked around the courtyard.

Those tables were in front of large door above which was a sign announcing Restaurace U Draka, which seemed to be closed. But I walked on because the tables continued around the building (which used to house the castle's brewery) to form a large, but narrow patio facing a pond. Part of it was roofed, the rest was made of massive, long wooden tables, each with its own wooden sculpture. They were sort of surrounded by more wooden sculptures and games by the wall of the old brewery. The far end was taken by a grill with stools around it. It was quite a sight. 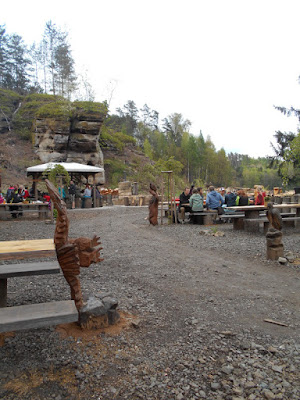 And they served food! Real food, not the usual freshly unfrozen stuff. Unfortunately, though, the kitchen had closed for the day, but we could drink something, if we wanted—of course we did.

I had a desítka of Kostecké Pivo, a beer, they claim, is brewed specially for the restaurant at some anonymous according to their original own recipe from Olympus knows when, which I find very hard to believe, and not only because the story of the beer is likely the most egregious bollocks about beer I've read in my life (really, if you're going to make shit up, at least get someone with a basic understanding of the topic to do it). But the really important thing is what's in the glass (or, in the case, the plastic cup), and this beer was pretty fine, if a bit too heavy on the caramelised malts for my taste. So, bollocks and maybe even lies notwithstanding, Kostecký Pivo is much better than other stuff you find at most castles and palaces, and, at 25 CZK a half litre, it was also good value. 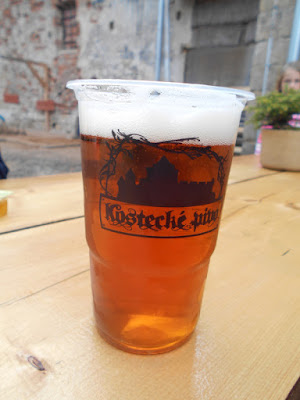 The same can be said about the food, at least the grilled salmon we had (minus the bollocks). The grill was still open and they were happy to put together something for us. I'm not a big fan of salmon, but this one tasted good, it was fairly large and with a generous side of cabbage salad and bread. It was also great value at 150 CZK!

It was a great way to end a great day. We loved Restarurace U Draka, it's nearly everything I wish places like Turistická Chata were—a destination on themselves—and we promised ourselves we'll be back to see what the rest of the food is like.