As someone convinced that drinking, and not tasting, is how you can really appreciate a beer, I don't get excited any more when beer events announce they will have hundreds of different brands. In fact, I find it to some extent rather redundant. It's not a criticism, it's just a personal feeling.

How many beers can I drink in one day without ending up legless (and useless the day after)? 10, 15, 20 perhaps, if I stretch my limits, take my time with each beer, and drink carefully (though not moderately)? Any figure much higher than that will be, as far as I'm concerned a bit of a waste of time, and maybe even a nuisance. What beers should I drink? Should I gamble on new ones, or play safe and stick to stuff I'm familiar with? Which are the beers I should start with, and which should I leave for end of the day, when my senses will be tired and myself probably quite pissed? And what should I drink next, that thing my mate is drinking that is quite good, or something neither of us have had yet? But I will have to be very careful with my choices – a crap beer would mean a waste of time, money and liver capacity that could have been allocated to something else. The tyranny of choice.

One of the reasons I believe Vysmolení, at Černokostelecké Pivovár, is one of the best beer events in the Czech calendar is precisely their very limited beer list. 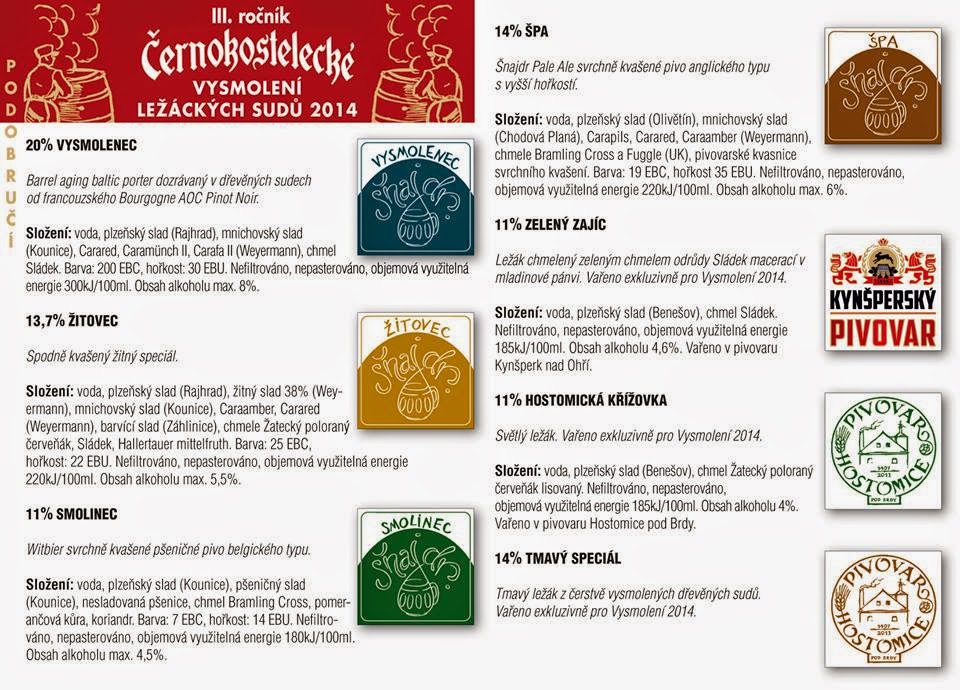 Look at that. 7 beers – 8, if we count Kácov 10º that isn't included on the list. It's brilliant! Or, rather, it was brilliant, yesterday. Quality over quantity – four of the beers are brewed on site by Jarín Šnajdr, and two had been brewed specially for the event.

I was able to drink all of them, without exception (well, yes, Kácov, I forgot it was there), and then I mostly stayed with those I liked the most – Žitovec and Tmavý Speciál – while I focused on the more pleasant aspects of going to a beer festival, spending a day having a great time, in great company and meet some people I don't get to see as often as I would like.

And what a great day it was! I got there shortly after 9 (thanks Líbor for the ride there and back), and it only took a couple of minutes to get my first beer, Hostomická Křižovka, a lovely 11°, and went through the rest of the list from there, spending much of the day sitting behind the “cask bar” with friends (it was a lot of fun there, I even served a few beers!)

The beers were of moderate strength, and with not too intense flavour, which helped me stay up, drinking, until past midnight. The only exception was Vysmolenec, the 20º Baltic Porter aged in Pinot Noir barrels gravity dispensed from the wood (as were others, what a pleasure, I love gravity dispensed beers) but I only had a small glass of that one (very, very good stuff).

There's a sibling event in September, Vykulení. I hope I can make it this year, because it looks every bit as good, if a bit bigger.

Yeah! And thanks Milan and Tomáš for once again allowing me to crash at the brewery, and for everything else. Much appreciated.