By Pivní Filosof February 16, 2011
My cat is badass. Really badass. He's mixed with Siberian or Norwegian and in winter can weigh up to 7 or 8 kilos. 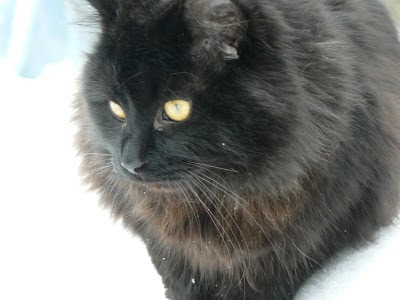 He's pretty big and he's badass. One day I saw him keep his ground in front of a boxer.

It was one of those rare summer afternoons that Apolo was at home. One of our neighbours stopped by with his dog in our garden to say hello. The cat was stretched by the French window and when he saw the dog he crouched as if ready to jump. The dog saw him and went closer. Apolo didn't move. The dog stopped right at the window and looked at the cat with curiosity. Apolo didn't move. The dog put a paw inside the house. Apolo didn't move, but he doubled in size and instead of a hiss what he uttered was a deep growl that sounded as if a demon was about to fart. It gave me a slight chill, I must confess. The dog reassessed the situation and, very slowly, took his paw out of the house and, very slowly, walked backwards, never taking his eyes off the cat. Apolo didn't move and carried on stretching by the window.

Why all this? Well, my cat's favourite food are chicken hearts and since I also wanted to be at least a little more badass, I thought I would cook something with this delicacy and here's the recipe:

Chicken hearts in Porter Sauce
(serves 1)
A handful of chicken hearts cut in half
A medium sized onion, sliced
A large garlic clove, sliced
Three or four slices of bacon, chopped
A generous dash of tomato sauce
Around 150ml of Pardubický Porter or any other strong dark beer that isn't too hoppy
Goose lard, thyme, sage, pepper and Hungarian paprika 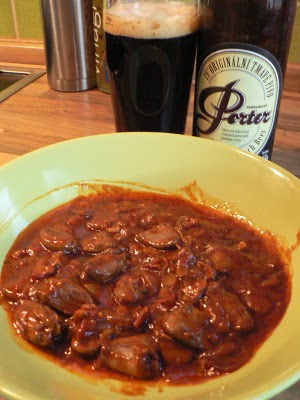 Melt the lard in a very hot wok and add the bacon, let it release some of its flavour and add the hearts. Stir them until they are getting brown and add the onion, the garlic and the spices and herbs. Mix for a couple of minutes and add the beer and a bit later, the tomato sauce. Let it reduce a little and serve.

I ate it only with some rye bread. I had though about opening some tmavý ležák, but I still had plenty of Porter in the bottle so that's what I washed it down with and I ended up feeling a bit more badass.