By Pivní Filosof September 06, 2010
Finally, the time came for the last of the bottles that Todd had brought me, Smokestack Series Collaboration No. 1 fom Boulevard Brewing Co.. Unlike the previous two, Yeti Espresso Oak Aged and Russian River Supplication, I didn't open Collaboration Nº1 because I thought it would "pair" well with a given moment. I did it just because I wanted to drink something new and its elegant bottle was the one that caught my attention first.

Todd had brought it a bit like a joke. According to the brewer, it is an Imperial Pilsner and he had read my opinion about this "style". Opinion that hasn't changed a bit, actually, after reading the back label, it's been reinforced.

The name, Collaboration, is because the beer was brewed together by Steven Powels, brewer at Boulevard, and Jean-Marie Rock, Brew Master at Orval, recreating a beer the latter used to brew at the beginning of his career, which I very much doubt was categorised as an Imperial Pilsner.

But nobody gives much of a toss about what the labels say, better pay attention to what the beer says. 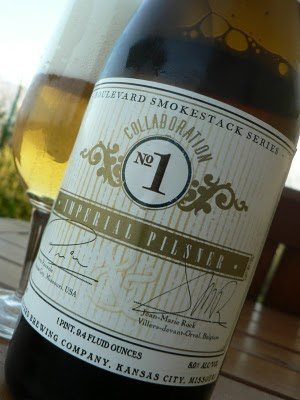 It's brewed 100% with Pilsner malts and Saaz hops and it pours the expected pale gold topped by a head as white as an ad for clothes washing detergent. The first thing that is felt by the nose is the alcohol, which fortunately, doesn't fully cover notes of pineapple, herbs and flowers. The taste has many of the things you would associate with a Světlý Ležák or a Pils, but, once again, with way too much alcohol. It's too think, there's not enough malts to support it. Too attenuated, something Mr. Rock himself confirms, the beer, at 8%ABV, is stronger than he had expected.

The link article speaks in detail about the "first wort hopping" method that was used to brew Collaboration Nº1. I wonder if they also used decoction, since they don't mention it, I will assume they didn't. Can that have been one of the reasons the beer attenuated so much, or at least, why it feels so thin?

Frankly, I didn't like it. With its pedigree and the presentation (and I'm sure, the price, too), I was expecting a lot more. In the end, it ends up loosing against the humble Jihlavský Grand.

Anyway, Todd thanks a lot for these three beers. Hope we can meet again soon.