By Pivní Filosof April 30, 2010
Yeah, I know I should be writing about the tetrahops and all the mess they've caused here. But it's Friday, I'm tired and can't be arsed with rereading newspaper articles in Czech. So you'll have to be patient, perhaps next week. In the meantime, tasting notes...

Once again, a Norwegian brew, this time from Nøgne-Ø. This is one of those beers that I've been wanting to drink for quite some time, it goes by the name of #100 (the reason for that, you can read on the brewery's webpage) and, unlike the other beers from the Grimstad micro, it hasn't got a style mentioned on the label. I love it when a beer doesn't belong to any style, it's a pity there aren't more of those. But then, many times happens that someone makes a styless beer that becomes successful, other people start copying it, someone pulls a style out of their ass, usually starting with "Imperial", and soon you get a bunch of idiots criticising the original one because for not being "true to style". But I digress. You aren't here to read my style-anarchism rantings. You are here to read excellent beer reviews, and here you have it:

#100 pours an ocher shade of brown with a nice tanned head. The nose is mostly caramel, flowers, citrus and a pinch of licorice. The rest of the beer is, well, fantastic. The best way I can think to describe it is a blend between a very hoppy AIPA and a Baltic Porter, which, although very different from each other, come together wonderfully. It's respectable 10%ABV is very well integrated, though that could be thanks to the bitterness because I felt a bit lightheaded after finishing the bottle (I shared some with my wife, who also loved it). 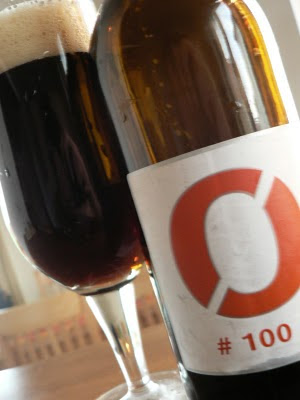 I remember reading a couple of not very flattering reviews of #100 that accused it of being unbalanced. It's not a beer for "beginners" and the hops run much of the show, but they are like a soloist in a well tuned and well rehearsed orchestra. However, after finishing with the beer I realised that the bottle had been filled almost two years ago. Can it be that #100 is one of those beers that are best enjoyed after some aging? I can also be that those reviewers just served it too cold. Either way, I thought it was great, and that is the only thing that matters to me.

Thanks Gunnar for this beauty.