By Pivní Filosof October 05, 2009
Okoř has always been one of our favourite places. When we lived in Velké Přílepy we used to go there quite often. It was a very nice and relaxed 4-5km walk, even in Winter.

The main attraction of this small village is its castle, or actually, the ruins of a Gothic castle. I'll never get tired of its view, it's got an almost mystic vibe. In fact, all the surrounding area is full of history, magic and legends. 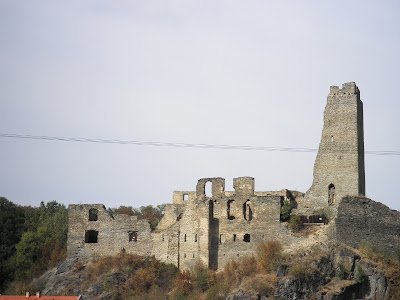 We also liked going for a treat to Dělová Bašta, the hospoda at the foot of the castle. It's architecture makes it seem like part of it. It's a very nice place that also has a very special atmosphere, be it outside on the patio or in the Gothic looking room inside.

At the beginning there used to be good service, so-so food and well drafted beer (back in the days when Staropramen was decent). At some point there was a change either in management or ownership, which brought better beer (Budvar), worse food and abominable service. This made us start going to the restaurant of Hotel Okoř, which, although isn't half bad, it just didn't quite make it for us, it was just not the same (besides, the beer there was never very good)

With all the mess of moving to a new house, I don't remember going to Okoř last year. We did go in May to the annual Medieval festival that takes place at the castle. It was then that I noticed that Dělová Bašta had switched from Budvar to Krušovice, another change for the worse, I thought at the time.

The other day we took my parents to Okoř. The day was a bit cloudy, but it promised to improve, and the temperature was great to go for a long walk, even to dine outdoors. We arrived at around lunch time and, almost automatically, we headed to the castle after we parked the car. When we got to the door of Dělová Bašta I saw a sign announcing Dožínkové Pivo, the new wheat beer from Heineken.CZ, brewed in Austria by three Czech head brewers. I thought that the risk of not too good food and lousy service was a small price to pay in order to taste a new beer.

It turned out that the changes were not limited to just a new beer supplier. Gone were the useless hominids that pretended to be servers, now there were actual people who really served the tables promptly and efficiently. The menu had improved as well, at least on paper. Now the offer was mostly grilled stuff and salads. We found a table on the patio, in a corner where we could park the pram without bothering anyone. The gods were smiling upon us.

My wife ordered a salad with Feta cheese and olives that had real Feta cheese and not the cheaper and not so tasty "balkanský sýr", as it happens at many places. The salad was 135CZK, was quite big and my wife liked it a lot. 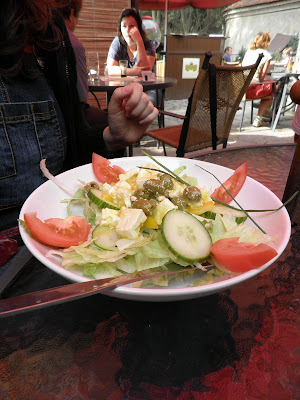 My dad ordered a grilled tuna steak that came with a whole potato with Parmesan cheese. A good deal for 195CZK and my old man loved it. 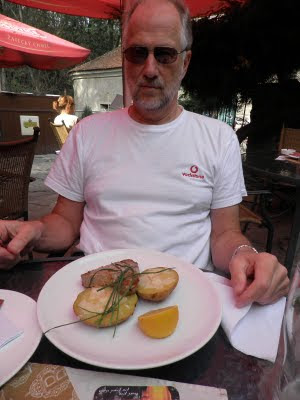 The winner, no doubt was my mum. She ordered a salad with grilled tuna and Parma ham that she said was delicious and a real bargain for 155CZK. Both tuna steaks would likely not have been to the taste of those who prefer them rare, but my parents were really happy with them, and that is what counts. 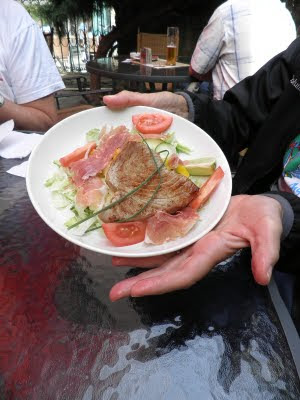 I went for a pork tenderloin skewer (165CZK) with Šťouchané brambory (something like crumbled potatoes, 35CZK). It was a pretty big portion, with two well sized skewers. I liked that instead of just the typical onion and peppers, the skewers had bits of zucchini and aubergine between the generous and very well grilled chunks of pig. I would have added bacon, but it was still very nice. 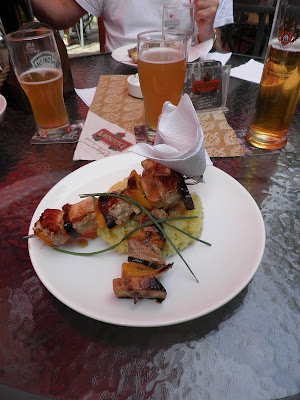 Oh! The beer! That's what you come here for and not food reviews, there's people out there that do that better than me (well, actually, there's people out there that write about beer better than me, but I guess I do it well enough). Dožínkové Pivo. I didn't take notes (I don't like very much taking notes when I'm among un-beer people), but I remember that it was pretty good. Rather dry, with strong presence of spice and a sour bite that wrapped things up nicely. My only gripe, it only came in 0.33l Heineken glasses. Why they didn't serve it in adult's portions, I don't know. 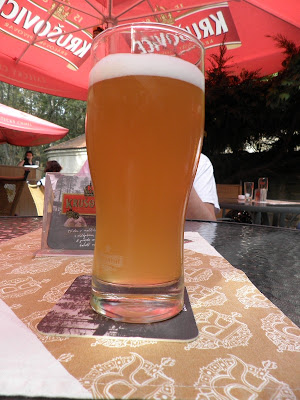 Anyway, feeling really happy thanks to our jolly bellies, we went for a walk in the woods that surround Okoř.

The trail snakes between cottages that are mostly weekend and summer homes. There are also a few bigger and very nice houses that seem to be inhabited on a full year basis. We walked all the way to Nový Mlýn, a house in the middle of the forest with one of the most beautiful gardens I've ever seen. Wouldn't it be great to set up a brewery in a place like that? 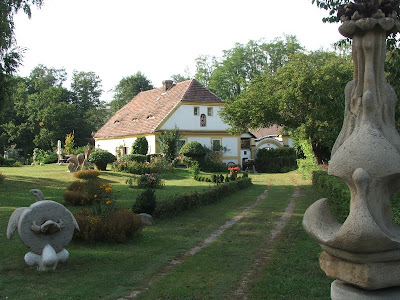 Before going back home we stopped at the restaurant of Hotel Okoř to have something sweet. We sat on the patio in front of the building. We didn't enjoy ourselves so much this time. It wasn't because of anything wrong with the service or food, both were good, neither because of the place, very nice. It was because of the swarm of flies that infested the spot, which basically chased us away as soon as we had finish our sweets. Pity.

It was a great day. We all had a fantastic time, even my little daughter. Okoř is really a place worth visiting. 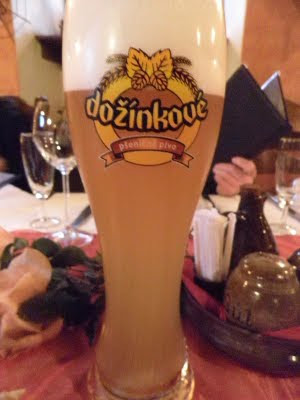 Back to Dožínkové Pivo. I had it again a few days later at Špejchar, the country pub that was my second home while I lived in Velké Přílepy. This time it came as it should be, in a half litre ad-hoc glass. I found it quite different, there was more banana, dancing a beautiful dance with the clove, and the sourness was much more subdued. I liked it more, it tasted a bit similar to Primátor Weizenbier. It can be that the one I had in Okoř wasn't so fresh anymore.

Anyway, I tip my hat to Heineken.CZ. Even though the have closed down a couple of breweries (and will likely do the same to another one soon), they seem to be caring about the quality of the beers they still make. (perhaps they should care a bit more about the quality of Starobrno Černý, I had it the other day and it tasted like regular Starobrno, not bad, with food colouring, very bad).