A bit too much

By Pivní Filosof September 23, 2008
If only the weather had been up to the occasion of the Slunce ve Skle craft breweries' festival it would have been like heaven on Earth. Yet, instead of being a pleasant mid-september day, as it had been the previous Saturday in Jižní Město, it was overcast and pretty chilly. 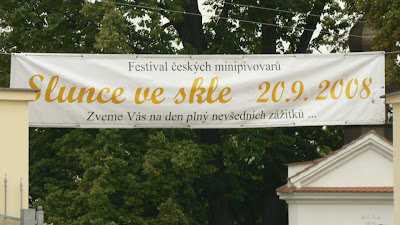 In spite of that, it was spectacular, I had a bit too much fun. Well, actually, I ended up totally sozzled. Fortunately, we had been driven there by a friend. Maybe that was one of the reasons I got so pissed, knowing that I wouldn't have to worry about getting back home. But then, another reason could have been the almost 40 different beers available from 12 craft brewers from all over the country. Or was it having such a good time with friends, both new and not so? There were VelkyAl, from Fuggled (great blog, worth reading) and his wife; Javier, an Argentine living in Prague that came with some friends from Venezuela; the friends of Mrs VelkyAl; Iain and his mates; Tomáš Erlich from SPP; Honza Kočka from Pivovar Kocour Vandorf and more. Though, it could have also been those beer based spirits that showed up by the end, which I think I should not have drunk (they were fine, but still a mistake). Whatever it was, let's say it was a work related accident, or something like that. 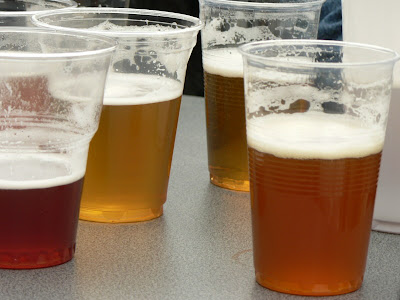 I had never seen a line-up of such size, variety and quality. There were beers for absolutely every taste and needs. There was even a nealko craft beer, first time I see something like that. It was really dark and coffee flavoured, with a really surprising taste, and brewed by Modrý Abbé Klatovy, who also brought three samples from the great Kout na Šumavě. 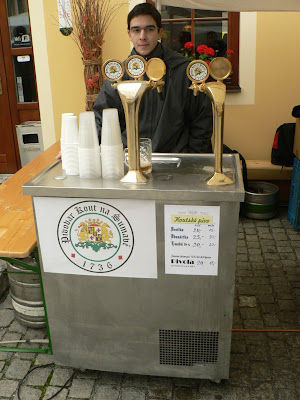 It was precisely with Kout that I started the party. I had their 12ª (delicious, full of Saaz, and refreshing as rain on a hot summer day) as an aperitif. My plan was to focus on those I didn't know, but I still wanted to start with something, let's say, standard. My wife chose Kout tmavá 14ª, nicely roasted notes with a bit of coffee and chocolate, and our friend, Ljuba, opted for the nealko, as she was the designated driver. 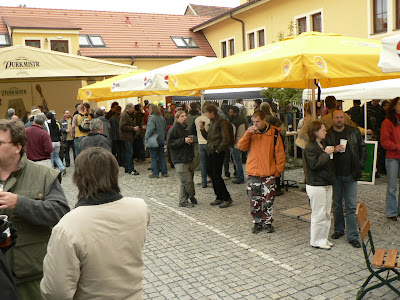 I followed with Kocour's Pale Ale. Superb! It goes in with apples coated in mild caramel and finishes with a very dry bitterness, great contrast. I've chatted a bit with Honza Kočka about his plans (if you want to know more about them, read this Evan Rail's post). Later I had his IPA, another wonder of the art of brewing. Both were among my favourites of the day. 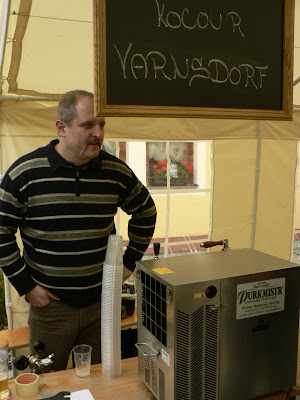 There were also a couple of smoked beers, the brilliantly conceptual V3, also from Kocour Vandorf, one of the darlings of my darling, and the UrrRauch, from the hosts, Purkmistr, which had nothing to envy Schlenker Märzen, perfectly balanced flavours, enough smoked notes to satisfy more experienced palates, but without overwhelming those who aren't. Delicious.

From Purkmistr I also sampled one that I had missed when I first visited the place, their Polotmavé. I found it similar to Primátor Polotmavé 13%, though tastier and richer, fresher, too. 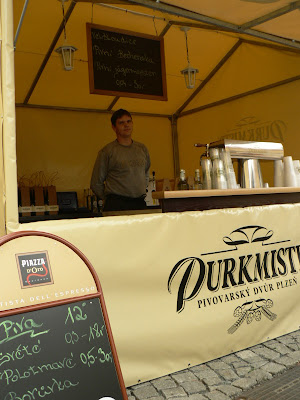 They also presented two fruit flavoured beers, one with blueberry and another one with cherries. I knew the former, didn't drink the latter, though my wife did and told me it was pretty good. 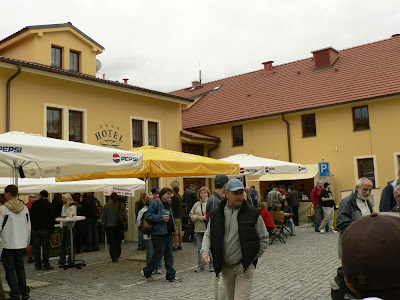 There were a couple of rarities, too. Pivovarský Dum brought their kopřivové, their very particular nettle beer, and a rye ale, which I liked a lot. Chýně, on the other hand, brought their excellent kukuřičné, corn beer (of which I'll talk in more detail soon). 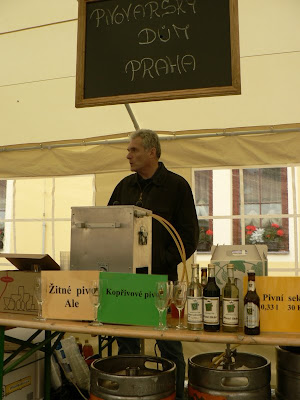 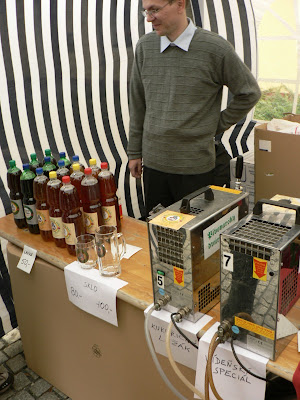 Wheat beers weren't missing either. U Ribíček Stříbro, together with their excellent Argent 12% and Horník 13% (the dark lager I liked best) and others, brought their powerful Duchmaus Weissbier 14%, bottom fermented and delicious, pretty robust for a weizen, but very easy to drink. However, the one I liked best was Staročeské Bilé (Old Czech white beer) from Hastrman Velký Ribník, with just the right acidity and fruit, silky, almost chewy. Their 11ª ležák was another pleasant surprise, a bit more mainstream stylewise, but with lots of hops, really fresh and refreshing. 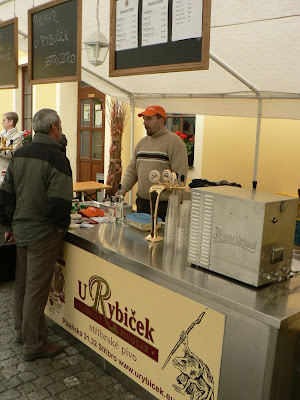 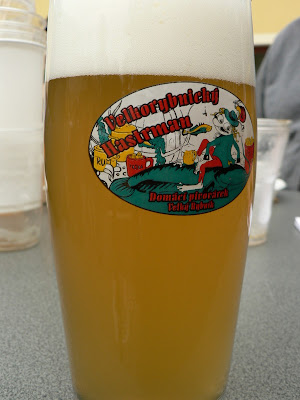 I also tasted beers from Pivovar Sokolov Permon and Pivovar Belveder, not bad, but nothing memorable either. I could say the same about Vsetín, although, by then I wasn't exactly able to appreciate those beers as I should. 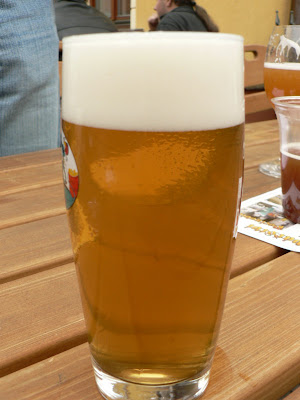 The biggest and nicest surprise, though, came from and old friend, U Bansethů, Bašta. A couple of months ago I had critisised them quite harshly, but I think justly, and specially their 15%, that I had thought almost awful. I drank it again on Saturday and it was like drinking another beer. Everything that was wrong that day had vanished, it was as if the one I had back in July was an image out of focus, and this one here, the same image, but properly focused. I had already heard that the situation at the Nusle brewpub had improved, I was happt to be able to see it myself. 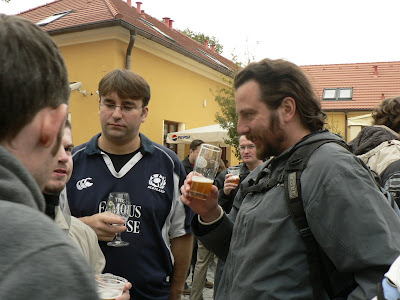 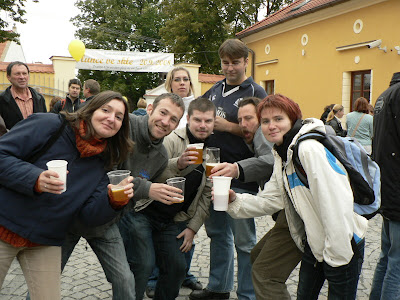 What followed was more and more beer. I had already stopped paying too much attention to what I was drinking because it had all become a session already, but without session beers. Then came the above mentioned shots, Pivní Järgermeister, Pivní Becherovka and Pivovice, with their subsequent effects. Something I regretted the day after. 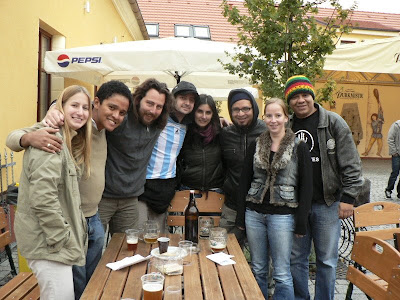 It was announced this festival to be the first edition. The idea is to have a Slunce ve Skle each year. If that's the case, I'm already looking forward to the next one, which I hope to finish in better shape.