On the piss in Franconia (Day 3)

By Pivní Filosof August 17, 2011
Click here if you want to know what happened the first day

I woke up shortly after... Well I don't after when. This time it was not my bladder that got me out of bed, but something a bit more urgent and a lot less negotiable.

The digestive Chernobyl that followed forced me to leave the room in search of something that resembled fresh air. I felt awful. The head was alright, but my stomach felt as if it was floating in a mix of ink and burnt frying oil. Nothing that a good dönner kebab, an espresso and a cold beer couldn't sort out.

At ten we left the hotel, put our bags in the bus and went for lunch. Daša had arranged for us a visit to Brauerei Kraus, in Hirschaid. It turned out to be a very pretty place. The brewery itself had nothing remarkable about it, but the complex that surrounded it did. It included a place for private parties, a beautiful beergarten, a hotel and a restaurant. 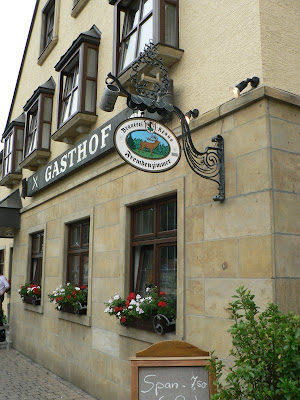 The brewery has been property of the Kraus family since it was established in 1845. Today, it is Mrs. Kraus who calls the shots, while her husband spend his time doing what he likes best, fishing and hunting (and drinking, I presume), which brings me to the lunch thing I mentioned above. 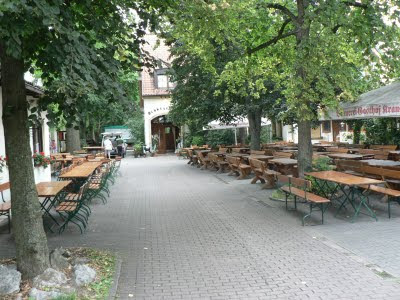 In the small towns in Franconia people still keep the Sunday family lunch tradition, but, unlike in most other countries, they don't stay at home but go together to country restaurants. The idea is having a long walk before and after the meal.

Kraus's restaurant has a very good reputation in Hirscheid and its surroundings and if it hadn't been for Daša, it would have been more than impossible to get a table. Our friend, because by then she was already one more of the group, talked to Mrs. Kraus and convinced her to let us seat at the stammgäste table, quite an honour.

The restaurant is very nice, with everything you imagine a rural German restaurant can be, and then some, a lot of wood, hunting trophies, etc. etc. There was even a chandelier made with antlers. 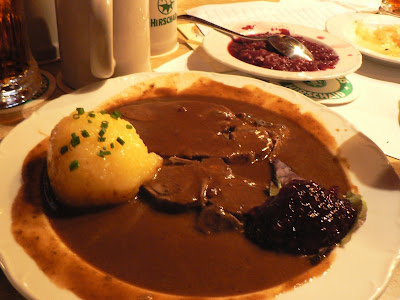 The place's reputation is more than deserved. The food is impressive! Germany sized portions, everything fresh and home made. I ordered roasted venison in a sauce with cranberries, it came with the typical dumpling and stewed red cabbage on the side. I can't begin to explain you how good it was. Just remembering it makes my mouth water. And the price, great, 9EU. 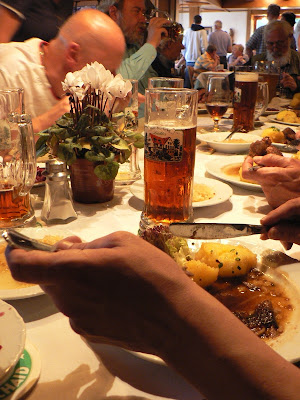 What I drank before and during the meal was the house's Kellerbier. A very well educated brew, it won't interrupt the conversation unless is spoken to. Yummy, yummy. Several fell in the line of duty. 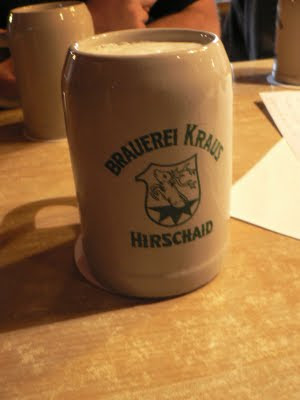 It's so nice to drink this kind of beers in earthenware mugs! When you finish it and want another one (and why not?), you simply you simply lay down the mug and soon it will be replaced by a full one. No words are needed, not even looking at the server. After the meal I ordered a Hirschentrunk a dunkles with a touch of smoked malts that tasted like made of sweet dreams and came served in an elegant chalice. 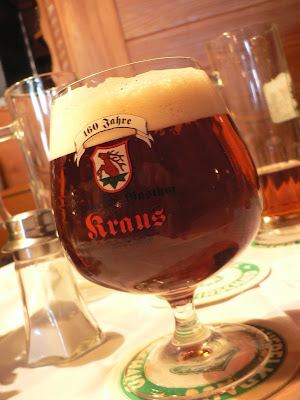 We finished lunch feeling happier than a Bishop at a private concert of the Vienna Boys' Choir and got on our way to Forcheim to say our good-byes to the Annafest.

Some of the group went straight to the Kellerwald, but I and a few others chose to do some sightseeing in the town, which is very pretty. Even though it isn't a very touristy town, everything is very well taken care of, it seems people enjoy living there, and why wouldn't they?

We wanted to visit Eichorn and Neder, but at the stübe of the former there was a private party, and the latter's was closed during the Annafest. We had no other choice than going to Hebendanz, which is right next door to Neder, which in turn basically around the corner from Eichorn. Amazing, a town of 30,000 people that has three breweries in the centre. 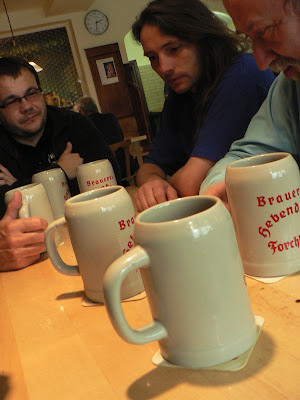 Hebendanz is to Forchheim what Fässla is to Bamberg, i.e. the local pisshead's favourite pub. However, early on a Sunday afternoon, there wasn't much going on. The beer on tap was a more than decen Export.

We didn't linger there for too long. We finished our beers and went to the Annafest, to Greif's Keller, where we had a farewell Maß (well, two), while enjoyed the wonderful atmosphere of the Kellerwald for one last time. 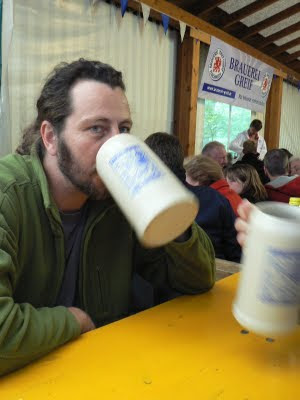 Those weren't the last beers of the day, though. Among my travel mates was Ivan Chramosil, Brew Master at U Fleků, who had brought along a few bottles of his famous beer, which was poured in a Maß someone had kept as a souvenir that passed from hand to hand during the trip back home.

It was a truly memorable weekend, I hadn't had so much fun in quite some time. I hope I can do something like this again soon. Thanks, Pavel, thank you very much.