On the piss in Franconia (Day 2)

By Pivní Filosof August 10, 2011
Click here if you want to know what happened the first day

I woke up sometime after eight. Or rather, I was woken up by my bladder and it was already late to try to negotiate with it. I went out in search of breakfast (it was not included and I didn't want to pay the 12EU the hotel wanted for it). Unfortunately, there weren't any bierstübe or biergarten open around so I had to make do with a bakery and coffee shop (great pretzel, pretty good croissant, crap coffee).

With something at least a bit solid in my guts I started walking around, following my feet. After a few minutes I remembered what we had been told the day before, that everything in Germany, except bakeries and petrol stations, is closed on Sundays (civilised bunch these Germans). I changed my course to the Getränkemarkt that was near the hotel.

What a wonderful thing a Getränrkemarkt is. This one in particular was supermarket sized and full of booze. And, of course, they had an impressive range of regional beers. I ran into Standa there, one of my travel mates, who knows a thing or two about German beers and was able to give me some advice. I stopped at six bottles, I could have bought a lot more, but I didn't fancy having to lug 30kg once we got to Prague on Sunday night.

I went back to the hotel to leave the shopping and something reminded me that this was going to be a very beer-intense day, so I went to the petrol station across the street to get something else for breakfast, something that would get me ready for what the day had in store.

Besides the ubiquitous mass produced, multinationally owned brands like Paulaner, Beck's and Bittburger, this petrol station had a more than decent selection of regional brews. I picked a Landbier that was cold enough and decent enough to be drunk straight from the bottle. That's class. 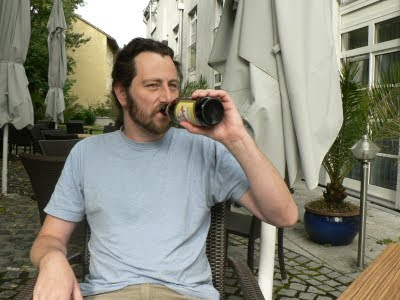 At about ten we all got on the bus and got on the way to the first stop of the day, the promised city of Bamberg (prior a quick stopover in Erlanger to pick Daša up).

I had wanted to visit Bamberg for a long time already and I was very, very excited. The city didn't disappoint at all. It's beautiful (I made many pics, but the weather was rubbish and they don't do the town justice). It's one of the few German towns its size or lager that wasn't destroyed during WWII. It's really worth visiting. It didn't disappoint beerwise, either, far from it.

The tour included a guided visit to the local Brewing Museum. It's interesting to learn about how beer was brewed in the past, but not nearly as interesting as to experience how it is drunk in the present, so I had decided beforehand that I would skip the museum and do some pub crawling (or should I say, stübe crawling) instead.

Fortunately, I wasn't the only one with that in mind, I was joined by Tomáš Erlich, chairman of the SPP, and Petr Buriánek, beer wizard and creator of the recipes for the Zlý Časy's special beers. Petr had been to Bamberg several times and was a very good guide. Our first stop was Brauerei Fässla. 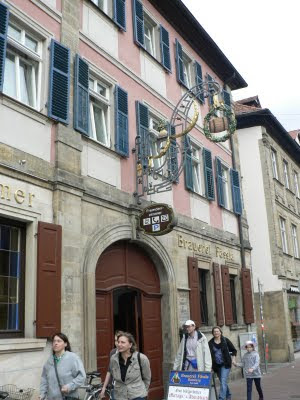 Of all the places we visited that day, Fässla y by far the least touristy. It stübe is a favourite among local pissheads, which gives it much of its atmosphere. You go into a long corridor with nicotine stained walls, a couple of tables always reserved for the stammgäste and a small window with the tap. There is also a room, but we didn't go in, we went straight to the courtyard in the back, where we had a surprisingly good Pils and and an average at best Lagerbier. 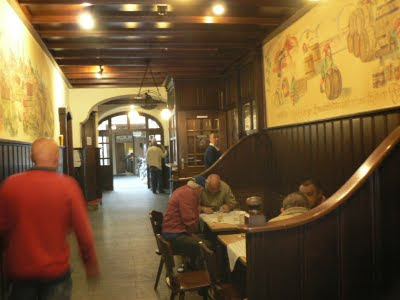 From there, we crossed the street to our second stop, Brauerei Spezial, the other Bamberg brewery that makes smoked beers. Their pub is a more "respectable" and "family friendly" place. It was around noon and it was packed. We were lucky to find an empty table in a corner. We ordered, of course, the speziality (haha) of the house, the Rauchbier. 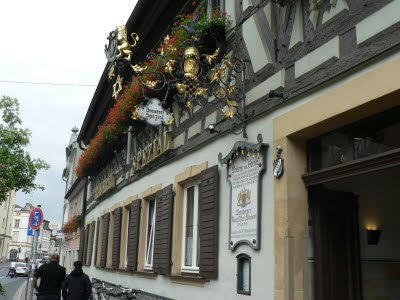 Anyone who tells you that Rauchbier is a style has no fucking clue what they are talking about. Spezial's couldn't have been more different than, for example, Schlenkerla's. Brownish amber, crystal clear, with notes that reminded more of wood than bacon. Delicious, glorious. 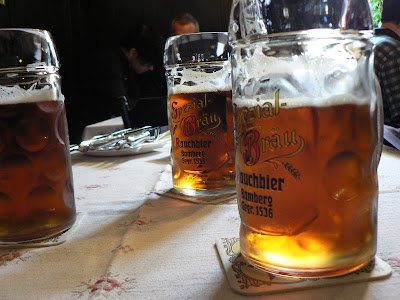 We were considering the possibility of staying there for lunch, but an SMS advised us that the rest of the group had just finished their visit to the museum and were on their way to Schlenkerla. Food can wait, beer can't. We paid and crossed the river once more. 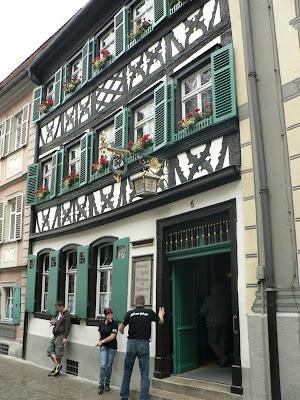 What can be said about Brauerei Schlenkerla? (apart that there's not much of a "brauerei" there anymore). It's a wonderful place. It was packed, of course, so we were left with no choice but to go to the courtyard and drink na stojáka with the rest of the group. 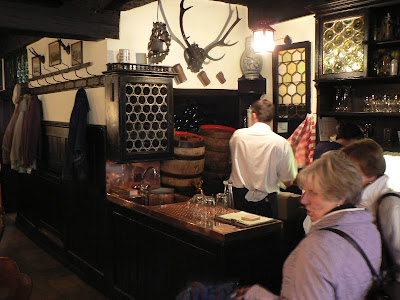 Schlenkerla's Märzen was the first Rauchbier I ever drunk and it was love at first sip. It's a beer that I now well, I've drunk it several times on tap in Prague and the bottles are a usual dweller in my cellar. Oh! But drinking in at Schlenkerla and gravity tapped is something else. Fuck me! What a great beer!

When it stopped raining, some of us moved to the garden in the back to drink and chat some more. Cool time we had. 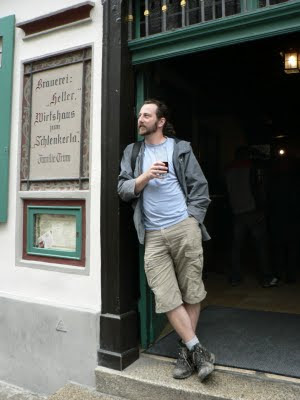 It was a rather shot time, though. There was still plenty to do and it was time to move on. We have to thank Daša for the next stop. She had managed to allow us a visit to the Weyermann maltings, the company she works for.

Weyermann, which has been run by the same family for over 150 years, is one of the most renown maltings in the world. They supply specialty malts to many Czech and, of course, German breweries and also to breweries in the US, Japan, South Africa, etc. They make 80 different kinds of malts, not only for the brewing industry, but also for distillers, bakers, etc.

I must confess that I wasn't very excited with the idea. I wanted to keep on boozing, but in the end I was very happy with the visit. The building itself is pretty nice. We were shown the room where the grain germinates, where we saw how this part of the process is still done the old-fashioned way. From there we went to the room where the grain is dried and roasted. Here we were able to taste some of the specialty malts that Weyermann makes. It was amazing to eat rye chocolate malt and see that it tastes just like top quality bitter chocolate (I would love to drink a beer made with this). The only thing we regretted was that the experimental brewery they have there was unmanned and were weren't able to taste any of the really interesting stuff they had maturing in the tanks.

Once the educational break was over we went to visit the (four me, Tomáš and Petr, at least) fourth brewery of the day, Mahr's. 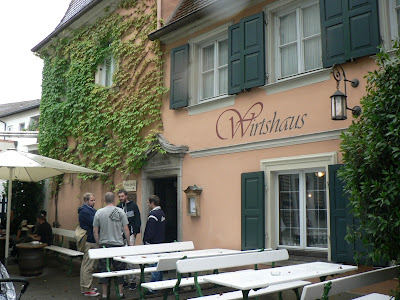 A couple of months ago I reviewed a few beers from Mahr's for Pivo, Bier & Ale and I loved their Kellerbier. I was dying to drink it in its most natural environment, gravity tapped.

Pavel Borowiec had mentioned that Mahr's bierstübe was one of the prettiest, and he might be right. It's rather intimate, with a low, almost black ceiling, very welcoming. The kind of place where you want to shelter on a cold and/or rainy day. 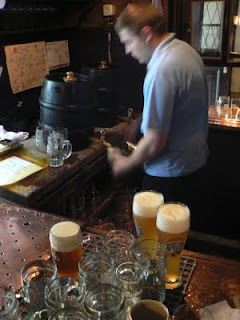 The Kellerbier didn't disappoint, in no way. It was indeed gravity tapped (we even witnessed the "ritual" of tapping a new barrel) and was majestic, better than a morning quickie. We had a couple of pints, all squeezed around a table, talking and laughing a lot, having a royally good time. It's so beautiful to go to a pub and have a beer or two with friends! Few pleasures in life can compare to that. 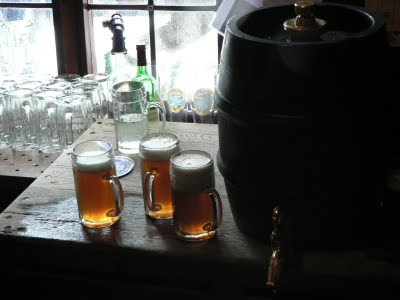 We could have easily stayed there until, well, until today, I guess, if it hadn't been for a little problem, they don't serve food at Mahr's at weekends. With a bit of a heavy heart we left this beautiful schenk and got on the bus in search of something solid to fill our stomachs. 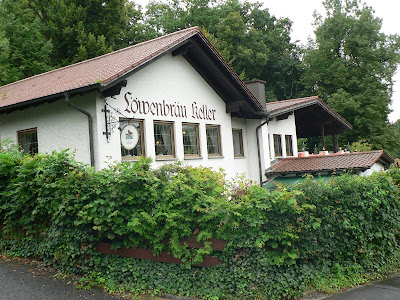 And we found a pretty nice place. Löwenbräu Keller (not to be confused with the namesake brewery from Munich). Nothing memorable, but nothing wrong, either with the decoration and the looks of it. The service was very good and the food, once again pork with the mandatory sides, was once again great and, once again, great value at 7EU for a huge portion. The beer, a keller that did what was expected of it without bothering to do much more than that. We licked our fingers, finished our beers and went to Forchheim for another dose of Annafest. 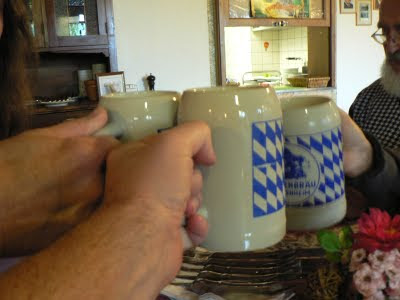 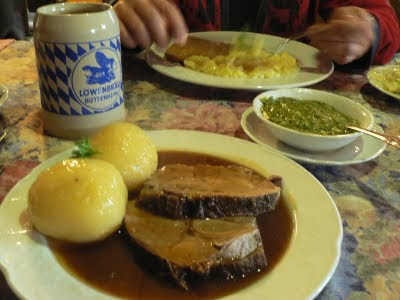 This time we started from the lower part of the Kellerwald. The fist Maß was from Weissenohe, which turned out to be perhaps the worst of the weekend. Unlike the rest, is dispensed by top pressure, and way too much of it. I didn't enjoy it, drank it anyway.

From there we wento to Löwenbraukeller. Their Festbier was quite better than the Keller we had drunk a bit before. 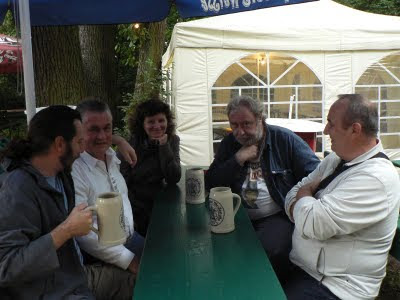 The next Maß was courtesy of St. Georgen (well, courtesy isn't the right word, I had to pay 6.9EU for it). You can find their Kellerbier every now and again at Zlý Časy, and I strongly recommend it. Their Festbier was also very good. My favourite of the evening.

I was told I also had a Maß from Greif, which may or may not be true. I wasn't paying too much attention to what I was drinking by then. I do remember that I was having one of the times of my life. I finished the Annafest evening with Pavel Borowiec and someone else listening to a band playing some kickass Blues Brothers-like tunes and singing to the top of my voice with each of the songs.

We went back to the bus, sharing a Maß and happy to be alive there and then.

I went to sleep well after midnight, unsurprisingly pissed, given the amount of beer I had consumed, and there was still one day left.