By Pivní Filosof December 22, 2010
I'm pretty busy and very tired these days and actually, I can't be arsed very much with Christmas this year. I would like to go to sleep and not wake up until Jan. 2 or 3. This, of course, doesn't mean that I'm not in the mood to taste some of the stuff that's been specially brewed for the season.

For a couple of weeks already, Pivovar U Medvídku has been offering Kaštanové Pivo, a beer brewed with an adjunct of chestnut flour. Very nice, the chestnuts are very subtle, yet they give a nice twist to the beer, resulting in something completely different to the other beers from U Medvídku. Brew Master Laďa Veselý told me he would have liked the beer to be more "chestnutty", but it was the first time he was working with the ingredient and he preferred to err on the side of caution (which, by the way, was a good decision because the flour was a bit of a nightmare to work with).

U Klokočníka, that lovely dive in the backstreets of Nusle is already tapping the Tmavá 13º from Pivovar Kácov. It's a shame that they serve it so bloody cold! I had to leave it for some time by the radiator that was next to my table to be able to pick some flavours. Quite similar to Eliška, though more on the roast side of the tracks.

Just nearby there, at Pivovar U Bansethů, I was able to taste the house's Christmas special. A Světlý Speciál with 15º Plato flavoured with vanilla and clove. I wasn't expecting too much from it, really, but I must say that I did like it. Both spices are very well blended together and with the rest of the beer. However, I would have liked to order a small glass, by the end of the půl litr I wasn't enjoying it so much anymore.

I don't know if it is still available anywhere, but the Christmas Ale from Pivovar Kocour that I drank last week was incredibly good. It reminded me to Fuller's 1845, though a bit darker and not as smooth. A great winter beer, one of those that will warm your soul.

As expected, this year, Pivovar Matuška also brewed their Vanoční Dopplebock 19º. I had a glass at Zlý Časy yesterday and at the beginning I was wishing it had more hops. I ended up liking it more by the end. It's got nice biscuit notes, a touch of spice and some dried fruits. A sipper that I reckon can be enjoyed better if served at 12-15ºC.

However, from all this, the one that I've liked the most so far is Zkouřenej Nuselák, elaborada en Chýně para Zlý Časy with 90% of smoked malts in the grist. Fantastic, simply fantastic. Thanks to the low attenuation typical of the beers from Chýně, this rauch has a firm and solid base full of sweetness, caramel and fruit that perfectly balances to bacon from the rauchmaltz. I have a couple of bottles in the garage that will sure pair perfectly with the Christmas duck.

Leaving the seasonal thing aside for a bit, but staying with the smoked beers. Yesterday, while I was making dinner, I opened a bottle of Schlenkerla Eiche. A new Dopplebock from the famous Bamberg brewery made with malts smoked with oak. 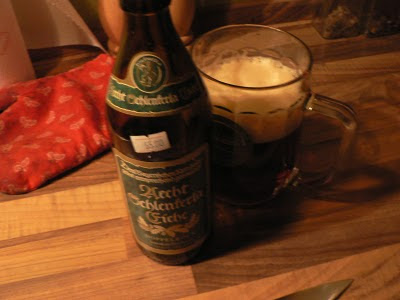 I don't want to lie my face off saying that I am able to tell what sort of wood was used to smoke the malts, but whichever it is, Schlenkerla Eiche is heavenly. Rasins, prunes, roasted autum fruit and sponge cake all wrapped in the highest quality smoked ham. And I don't care what the bottle says, I don't believe this beauty has 8%ABV. When I finished the bottle I went to open another one (this time enjoyed with some top of the range Chorizo Ibérico) and if it hadn't been that my hands were busy with the food, I would have knocked that first one down in three or four swigs.

So, if you are in Prague, you still have time to buy a couple more things for the Christmas table.