By Pivní Filosof December 08, 2010
With so many interesting topics to write about (besides, plenty of work of the kind that pays), I've been delaying these reviews of English Ales for a few months already.

I got them from Mark and Sarah, an English couple and readers of my blog. We met for lunch back in August and as usual in this kind of meetings, we had a great time. It's really incredible how the mutual interest, if not passion, in beer makes it possible for people from different countries, ages and walks of life to feel almost like old mates once they meet personally; and this is, by far, the best this blog has given me and, no doubt, one of the things motivates me to keep on writing it.

But let's talk about the beers. Mark and Sarah brought me samples of three breweries of their region, plus one from a London micro they picked on their way to the airport, all of them bottle conditioned. Their presentations are fantastic, as I'm almost used already with English beers and, except the Londoner, all are below the 5% ABV, session fodder.

The first one that I tasted was Dorothy Goodbody's Wholesome Stout from Wye Valley Brewery. The reason I chose it to open this "session" despite being the darker and stronger of the three regionals was the illustration on the label. On the back we are told that Dorothy Goodbody's is a real character, if that's true I would love to meet that bird (but don't tell my wife). 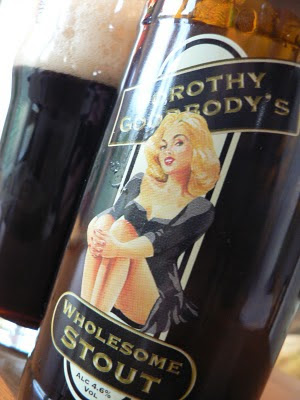 But well, the girl on the label looks very nice, but what about the beer? It's a Stout, so it's not pale. What surprised me a bit, though, was how much capuccino-like forth it poured with. Otherwise, this is beer of the kind that is best enjoyed in large gulps. It doesn't say much when sipping it, but drink it with thirst and you'll get its full expression. Bitter cocoa, roasted fruit and a finish that starts out dry, but leaves a mild, sweet coffee aftertaste. Pretty nice to knock down a few during a chat with friends. 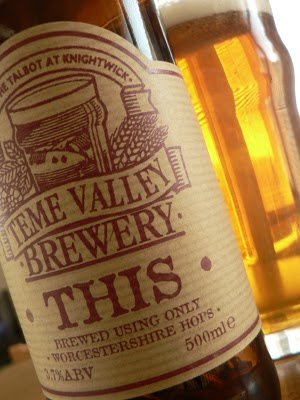 A couple of days later (I didn't drink all the beers in one seat) I opened This de Teme Valley Brewery. Besides liking its name a lot (the brewery also sells a beer called That and another one called Wotever Next, This was perhaps the one I most wanted to taste. England has a well deserved reputation of tasty, yet relatively low in alcohol beers. Unfortunately, the 3,7% ABV of This don't live up to the fame. It's not that there was anything wrong with it, it does down well and, technically speaking, I didn't notice any flaws. What it lacks, though, is what for me is most important, flavour and personality. Despite being a bottled Real Ale I didn't find it much different than an average Czech desítka. 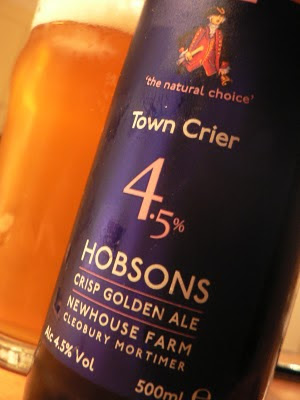 Fortunately, Town Crier, from Hobsons Brewery comes with a bit more flavour. However, this Golden Ale with 4.5%ABV, isn't the "Beer with a big voice" that the back label announces. It tastes fresh with notes of creal, white bread and a mild bitterness in the finish. Refreshing, summery, thirst quenching, good to liven up the conversation around a grill, but beers of that sort are plenty around here and they don't need to be Real Ales for that. 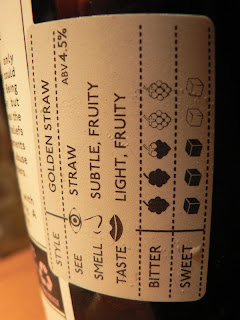 And interesting thing on the bottle is the label on one of the sides that shows the tasting notes according to the Cyclops method. Favoured by my friend Velký Al, I must say that although I don't use them, I believe it is really easy to understand. 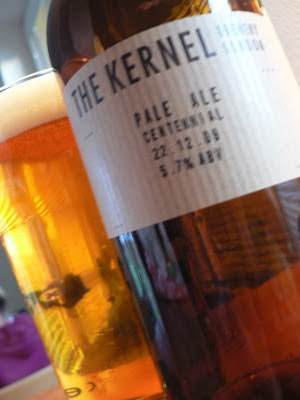 To close this session I left the Pale Ale from The Kernel Brewery in London, the strongest of the lot with 5,7%. It pours paler than I expected (for some reason, I still get suprised by such pale Pale Ales). The nose is mostly juicy tropical fruit, which mixes really well with the grapefruit that appears on the palate. Both are very well held together by a malty base that brings a very nice balance. Very pleasant. Unlike the previous three, this Pale Ale can be enjoyed in short sips. I can't even imagine what it must be like right at the brewery.

I wasn't too happy with the three regionals as a whole. I did like the Stout, yes, but, if compared, the one from Titanic Brewery is a few steps above Dorothy. The other two, on the other hand, aren't any better than what I can find here pretty much anywhere, which perhaps adds to the, for me irrelevant, debate about whether a Real Ale is automatically better than a CO2 injected beer.

Thanks again Mark and Sarah for these beers. The bottles are now making my library a bit better looking.