By Pivní Filosof February 24, 2010
The first time I cam across the phrase "Imperial Pilsner" was on the label of Mikkeller Draft Bear, the beer I drank to welcome the new year. though I thought the name was quite silly, I figured it was a bit of a joke.

A few days later I saw a Dutch Imperial Pilsner reviewed in a Spanish beer blog. And a couple of weeks after, Stan Hieronymus wrote that Orval's Brew Master had also made an Imperial Pilsner in collaboration with an American Brewery.

I turned out Mikkel wasn't joking, at least not intentionally. An exhaustive Google search (all the way to the second page of the results) showed me several references to "Imperial Pilsner", in fact, according to a blog I can't remember, they seem to be everywhere.

But what is an Imperial Pilsner, I'm sure many of you are asking? A strong Pale Lager with an ABV around 8%.

WOW!!! A strong Pale Lager!!! How innovative! How come nobody had ever thought of it before?!?!

Wait a second! They have! And long ago. Here you have two examples from the Czech Republic: Primátor Rytířský 21% and 9%ABV and Jihlavksý Grand with 18º Plato and 8%ABV, both have been brewed for quite a long time, already. And actually, after re-reading the post on Draft Bear I see that I commented it was similar to Grand, but with different hops. 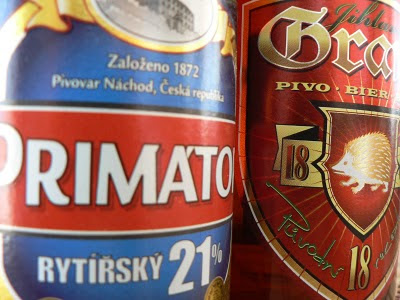 There's been some debate in the beer community about new styles, with some in favour and some against. Myself, I agree with Thisty Pilgrim when he says: "All brewers ought to have the freedom to play around with various hops and yeasts without it suddenly being nailed down and pigeonholed into some imaginary style."

Anyway, something like Black India Pale Ale might make no semantic sense, but at least it is something new. Imperial Pilsner, on the other hand, isn't.

But this leaves me with two questions: Will the BJCP include Imperial Pilsner in their list of styles? And, who will be the first idiot to say that a beer so labeled isn't "true to style"?