By Pivní Filosof February 12, 2010
Some of the reactions this blog generate are pretty interesting. One day I got an e-mail from a Swede called Leif saying that those beers that Gnoff had brought me where nor the best, neither the most interesting that Sweden has to offer, and that he would correct that in his upcoming visit.

So we agreed to meet one afternoon. I went to pick him up at his hotel and we went for some beers to Ferdinanda in Malá Strana (nice place, by the way, and Ferdinand Tmvavý Ležák is in really good shape). Leif turned out to be a chap of around 60, very nice and with a lot of beer knowledge. I had a great time with him. 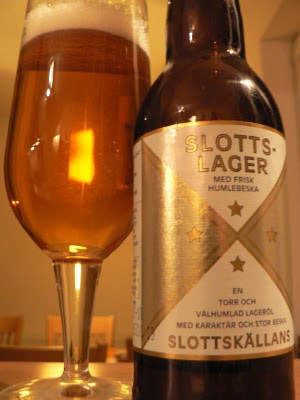 He brought a grand total of 11 samples. The first one I opened was Slotts Lager from Slottskälans Bryggery. Unfortunately, I can't find its tasting notes, so the review won't be all that accurate. For what I can remember, it was an OK pale lager, nothing wrong with it, but nothing particularly worth mentioning, either. Just the kind of beer that you can drink without paying too much attention to, and with is 5%ABV it's not hard to drink several (price notwithstanding). The good news is that when I went to the cellar to retrieve the empty bottle before starting to write this, I found another bottle from Slottskälans, a Red Ale, unopened. Nice surprise, you'll read about it. 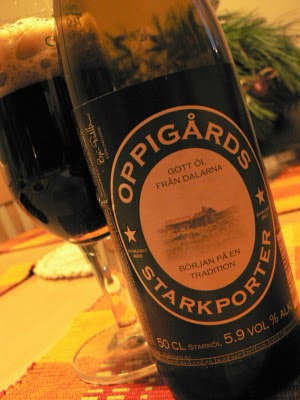 Later I opened Oppigårds Starkporter. I'd already tasted something from this brewery, their Golden Ale, which I found pretty good. I found this strong porter better (if you allow me to compare two completely different beers). Really dark, with a nice tan head. The nose is sweet coffee, cocoa and raisins. Fuller bodied than other porters I've had. The falvours are not very intense, but they still have enough complexity to make this beer a nice sipper, bitter chocolate, raisins and coffee that come and go and never get you tired. Lovely beer for a winter afternoon.

The other two were both from the same brewery Nynäshamns Ångbryggeri. Gnoff had brought me their Organic Ale, which I thought was great. I was really looking forward to their Bitter and Lager. 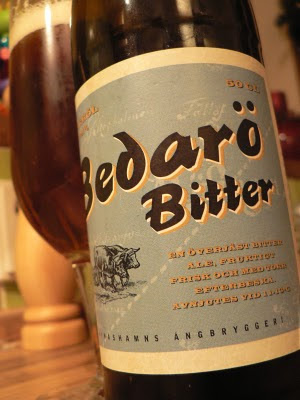 Bedarö Bitter (4.5%) pours a rather expected amber, with a bouquet the reminds of flowers and spice. There is a strong presence of clove in the taste, I'm not so sure it belongs there, but I didn't mind it too much, I liked what it did with this ale, gave it a nice twist. Behind the spice flowers and some fruit can be felt. Nice beer. 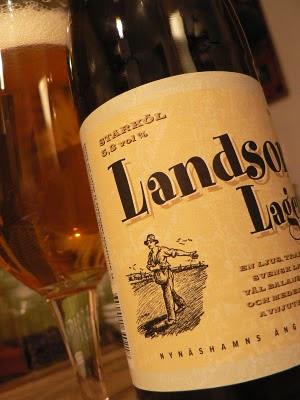 My suspicion that the clove wasn't something deliberate was reinforced when I sat with the Landsort Lager (5.3%). Pale gold, with aromas similar to the previous one, though with herbs replacing the flowers. Thin bodied, but quite refreshing. However, that clove that worked so well on the Bitter, feels completely out of place here. In the end, it's quite disappointing.

It's not often that I get to have a second round with beers people bring me or send me, so I was really glad to have the opportunity to drink these two again. Rökporter was as delicious as that first time, fantastically balanced, interesting and tasty.

The first time I drank India Ale I found it rather boring. Leif took issue with that and told me I should drink it with food. So I did, with a home made pizza with a couple of kinds of cheese, ham and a little spicy tomato sauce. Nice match, really. All by itself, I still found India Ale uninteresting, but there are beers that are best enjoyed while eating something, and this is one of them.

There's more, all from the same brewer, but I'll leave if for another day.