By Pivní Filosof August 17, 2009
After White Dog I still had four bottles left in the box that Gunnar had sent me. All from the same brewery, Haandbryggeriet.

I had tasted one of their beers, Rumjol, a Christmas brew that I had liked a lot, packed with flavour despite having only 4.5%ABV.

I was really looking forward to tasting these four samples, all very different to one another. There was a Belgian style brew, a smoked beer with juniper, a Douple IPA and a pretty strong dark Ale. It's not that Gunnar picked the four oddballs of the brewery's portfolio, if you go to their webpage, you'll see that the whole product line is pretty interesting. 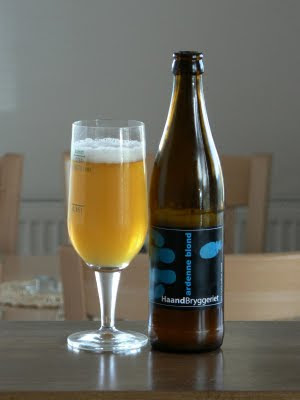 I decided to start with Ardenne Blond, which for some reason I thought it would be similar to White Dog, and I wanted to compare them. I was so wrong. Ardenne Blond is a completely different beer. It's stronger to begin with, 7.5%ABV. It pours deep gold, almost orange. The head doesn't last too long and there is a bit too much visible carbonation. The nose is very dry, with plenty of lemon peel and some grain. The taste offers a big contrast from the bouquet, something I really like in beers. There is a lot of tropical fruit, specially pinapple, with a syrupy background. Ardenne Blond's webpage says it is a "sparkling beer", fair enough, but to be honest, the excessive carbonation quickly became a nuisanse. I wasn't a big fan of this beer, half down the first serving it had already become a bit boring and heavy. An interesting thing about it is that it is fermented with house "wild style hose yeast". 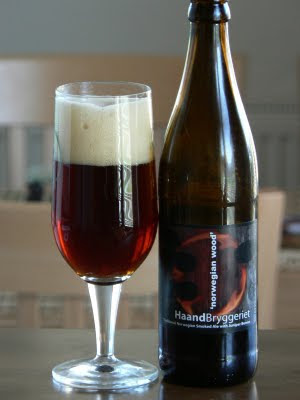 It was followed by Norwegian Wood. It's already well known what a sucker I am for smoked beers, and I really wanted to drink this one. According to its webpage, the beer is inspired by traditional Norwegian recipes, it is spiced with juniper berries and twigs grown in the brewery's backyard. And fortunately, it didn't disappoint. This 6.5%ABV brew pours ocre and doesn't say much to the nose, it seems everything is saved for the palate. There was bitter chocolate, wood, nuts, and a moderate smokiness that oscilated between a Bamberger Rauchbier and Nils Oksar Rökporter, all backed by some mild sourness from the juniper, I guess. Rich, interesting, to sit down and sip slowly. Ideal, for sure, to pair a platter with smoked meats and Jamón Ibérico. I loved it! 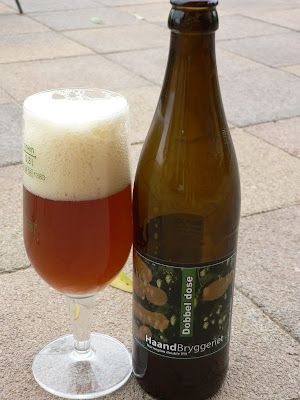 It was time now for Dobbel Dose, a double IPA.  I was expecting something in the American style, a C-hop bomb that will obliterate my taste buds. I wasn't all that eager to go through half a litre of something like that, to be honest. Fortunately, I was very wrong. Dobbel Dose pours rich amber, darker that other IPA's I've drunk. According to its webpage, it's brewed with European hops (that's all they say). So, instead of intense grapefruit or piney notes, here there are loads of flowers and herbs that make a nice contrast with the fruit in syrup undertones. And it is so tasty! The sip goes in fruity, then becomes dry and herbal only for the fruit to come back. The finish leaves a dry and mild aftertaste that forces another sip. At the beginning this beer tastes so refreshing that it tempts you to neck it down as if it was a session brew. It's a temptation you are adviced to resist, little by little the 9%ABV marks its presence, adding warmth to the beer and a touch of dry sherry by the end. If this wasn't enough, the yeast in the bottle bring in a different sort of character with a mild sourness that adds even more complexity to this delicious beer. I think this is my favourte IPA so far and it left me wanting more. 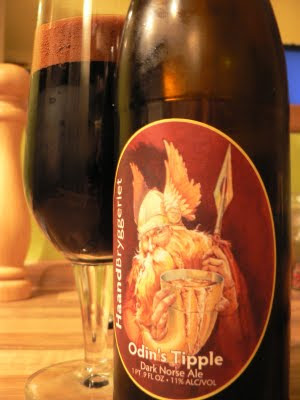 I left the strongest one for last, Odin's Tipple, with 11%ABV. At first I thought this was no more than a gimmicky beer, partly because it's label doesn't follow the esthetics of the rest, wich is a pity, because I like it. I shared it with my wife after a nice dinner, we were listening to good music, the baby was sleeping and we were in a good, relaxed mood. Odin's Tipple is black, very black, even the head is dark, brown. When I brough the glass to the nose there was something familiar there that I couldn't put my finger on. Sour cherries in rum! Said my wife with a big smile. And it was exactly that, together with wood and tobacco. The mouthfeel is viscous, but not heavy, and it is very complex. It's fermented with only one strain of wild yeast that gives it a sourness similar to the Brettanomyces found in Orval. The result is as if someone had dropped those run pickled sour cherries in a barrel of Impreial Stout. It's not very easy to drink and, in fact, it's a beer to share and enjoy in small doses after a meal. But I really liked its complexity and quirkyness.

It's a shame that beers like these aren't available in the Czech Rep. (at least not for now). But wherever you are, if you happen to spot them, given them a try, they are really worth it. Thankgs a lot to Gunnar for giving the chance to taste this very interesting drinks.