By Pivní Filosof August 10, 2009
As I told you the other day, my friend Gunnar sent me a box with five Norwegian craft beers together with a bottle of Westvleteren 12.

The first of those that I opened was White Dog, from Lervig Aktiebryggeri, which has a rather nice story. Gunnar told me that in his town there used to be a brewery that made the favourite tipple of those who lived there. At some point that brewery was bought by a bigger one, which eventually closed it, resulting in the "local beers" being shipped from Oslo (sounds familiar?). Fortunatelly a few years ago Lervig opened and once again the town had a trully local beer. White Dog is their first attempt at something non-lager.

When I first looked at the label I read "Based on medieval Norwegian traditions". Then I looked at the ingredients and noticed they were very similar to those of a Witbier. I was already preparing a very funny witticism about that when I read the label a bit more carefully. It turned out that it said Belgian traditions. Sorry, your loss... 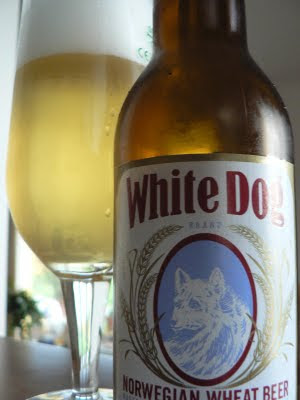 Regardless of what White Dog is based or not, it pours a very pale yellow, slightly cloudy, topped by a generous and very white head. The nose is very mild, some herbs and citrus with a background of cereal. The first sip starts with a rather dull note, there isn't much going on in there. I was already thinking that I would end up drinking something refreshing but uninteresting, but then... What was that? Lemon sorbet? (in the style they are made in Buenos Aires or Mendoza, something I really, really miss). Yeah, that's it, lemon sorbet, which quickly disappears leaving the stage to herbs and spices, only to come back again a sip later. I liked this beer more and more as I drunk it, and I ended up loving it. Very tasty, very summery, refreshing and relaxing. My only gripe with it is the bottle size, 330ml is way not enough for a beer like this (more so if you share it with the missus), at least half litre (in several doses) is what a beer of this kind requires.

White Dog is proof that a beer doesn't have to be strong (it's got only 4.7%ABV) or extreme to pack taste, be interesting and have some complexity, and on top of that, being very easy to drink. Of course, its nuances are not the kind that assault your tonsils like many of monters that top the rankings, but it doesn't mean that you can't find them if your senses are well enough tuned.

Sometimes I feel sorry for those people who don't seem to be able to enjoy anything that doesn't have "Imperial", "Double (or more)", "Oak Aged", etc. in a name or description.