By Pivní Filosof August 24, 2009
There is no doubt in my mind that Žižkov is the beer capital of Prague, and maybe even of the whole of the Czech Republic. I don't know of any other neighbourhood with so many hospody, restaurants and cafés that offer such a wide range of beers.

There were two spots that I'd been wanting to visit for quite some time. Both open in the afternoon and the other day, thanks to a last minute cancellation, I was able to visit them at last.

I started with the one that opens earlier, Žižkovská Pivogalerie. I had read in Svět Piva that this hospoda had adopted the "rotating tap" system and that they ussually stocked beers from Rebel and Poutník, two brands rarely seen in Prague. 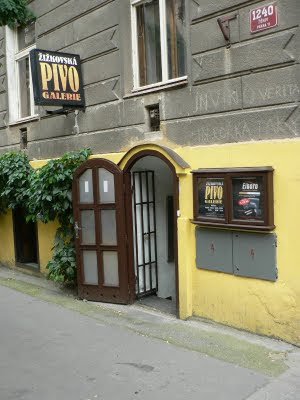 I was expecting a much bigger place. By the entrance there is a pretty small room, with just a couple of tables and the bar. There is another one in the back, but it looked closed, it was still early. Besides the bartender, there were only two patrons, both sure regulars.

I asked what was on tap. Svijanský Máz, not bad, but not a very difficult beer to find, and not what I had come here for. I finished my glass (it wasn't very well tapped, I must add) and left, feeling a bit disappointed. Perhaps I should have come later, a few hours later. Slowly, I walked to my second destination.

Merenda is right next to Hotel Viktor. It's divided in two areas, a diner with not much of an atmosphere at street level, and a pub with a lot more vybe in the cellar. Each has four taps and each has a separate offer of four beers. Interesting idea. 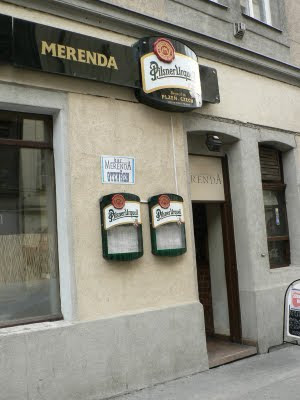 I went straight to the basement. There wasn't anyone. It was 4:30 and they had just opened. The room is long, not too big and has vaulted ceilings, something I like. It reminded me of Fraktal, a pub in Letná where, in another life, I used to go a bit too often. That feeling was made stronger when at some point someone rolled up a spliff and passed it around among the few that were there, in that other life I would have accepted it, not now, though.

I sat at the bar. None of the four beers were very exciting, something that occasionally happens at places like this. I had bad luck, usually they have more interesting stuff. I went for Lobokowicz Démon, which I hadn't drunk for quite some time. The bartender didn't understand me well and tapped me a glass of Permon Višňové (sour cherry). Why do so many Czech micros keep on making these beers flavoured with crappy extracts? (They sell well, good reason). The worst of them are, no doubt, the sour cherry flavoured ones. Sour cherries are, as the name well implies, sour. However, these beers are always sickly sweet, something I simply can't understand. I got my Démon later, and it was pretty good! 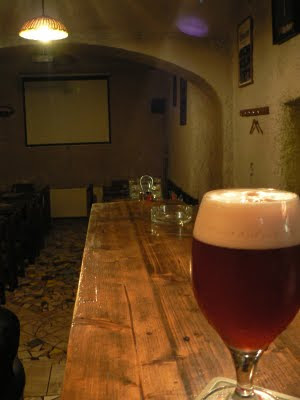 The bartender turned out to be a pretty friendly bloke. He asked me what I thought about my Permon, which started a nice chat about beers. It's nice to come accross a server that knows about beer. Not as an expert, but as an informed and curious consumer, which is more than good enough.

I really liked Merenda, much more than Pivogalerie. I though that the idea of two places in one, each with a different beer offer, is pretty clever, and the cellar is a really nice place to get together with a bunch of friends.