The moment of truth

By Pivní Filosof March 28, 2009
The moment I feared the most finally arrived, that one I did not want to face, tasting my own beer for the first time.

My first attempt at homebrewing did not end up well. The opinion of those experienced brewers that I spoke to or left comments here was that I had killed the yeasts with a thermal shock. I had forgotten to take them out of the fridge and I simply tossed them into the tepid wort.

But I didn't let that discourage me and two weeks later I had another go. The recipe changed a little, 500g of smoked malt (generously donated by Velký Al), 400g of Munich, 240g of caramel and 160g of wheat malt for a 5l mashing. Unlike the previous time, now I went for a single rest infusion, 75 minutes at 65°C, simply because I looked like a lot less work than the one I had done before. I did the boiling a bit longer, 75 minutes, too. The only thing I didn't change was the hopping, 30g with the same schedule as the previous time. The resulting wort had an OG of 1036 and marked 9° (Balling, I presume) in the sacharometer.

Having learnt from my mistake, this time I did take out the yeast early and I added a bit of sugar to whet their appetite. So I was very excited when I saw that a thick foam had formed only a couple of hours after I had put the wort to ferment.

A few days later I did the bottling. It was a lot of work! The hose I bought for siphoning didn't work, so I had to do it with sauce scoop. Fortunately, there were only 3.5l to bottle.

After nine days mi wife asked me if I was finally going to taste the beer. I put a bottle in the fridge and a couple of hours later I gathered the courage to open it. I was quite nervous. The fear started to fade after hearing a loud and healthy POP! when the swing top opened. The aroma that came out of the bottle didn't show any aparent contamination. Good signs. 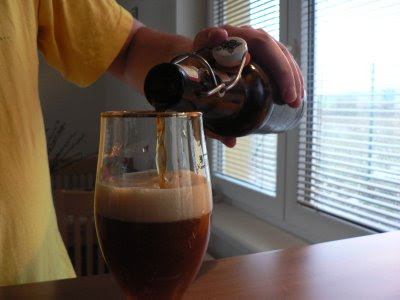 And the real moment of truth arrived. I poured very carefully because of the sediment (which I will deal with later). Brownish amber, a bit paler than I thought it would be, generous and compact head. The bouquet had a rich fruity background with a lot of Saaz up front, nicely balanced. It tasted very, very good! Really. The happiness I felt when I took the first sip. Firm bodied, again the fruit with some very mild smoked notes now (I thought they would be more intense), pretty hoppy and with a very long, dry and bitter finish. Despite of the intense bitterness, my wife liked it a lot as well. I was surprised at how well balanced it turned out, though I admit that my objectivity could be a bit clouded, just like a parent with a child. 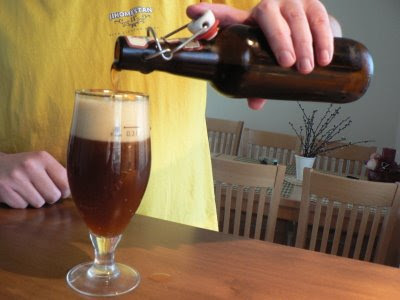 However, as I expected, the beer was far from perfect. The biggest problem was the insane amount of sediment in the bottles. I tried to filter the young beer with a tea strain, but I think I will need something much finer than that, or perhaps, find another way of decanting the sediments before bottling. Any ideas? Partly, I think this was because a mistake I made when pouring the wort into the fermenter. Most of the rest of the hops ended up in the container.

Whatever they are, I am sure these problems will be easy to solve, and the happiness that I have thanks to my beer being a lot better than just drinkable can't be taken away. So, if I can get the ingredients, next weekend I will brew again. 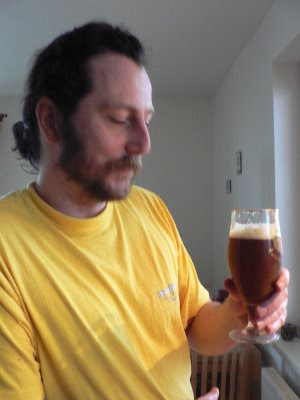 In the meantime, please welcome to this world Porteňa* - Pretty Hoppy Poltomavý Eil. I leave you with the two alternatives for a label that were picked by my wife. Which one you like better? 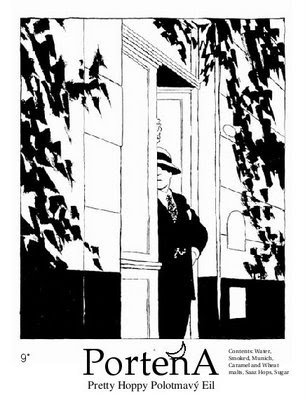 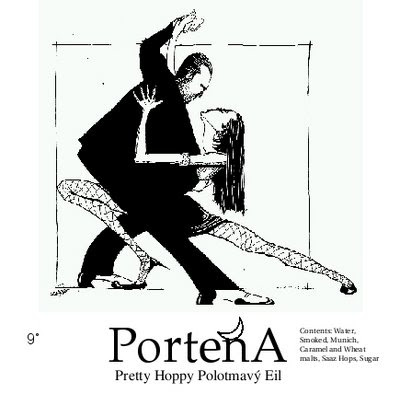 (*) People from Buenos Aires are called Porteños and in Spanish beer is feminine, thus the name of my beer