By Pivní Filosof March 16, 2009
I'm not one of those Argentine expats that feel nostalgia for the old country. I don't shed tears whenever I listen to a tango, and there is nothing in this world that would make me drink Quilmes Cristal. It's not that I'm ashamed of my nationality, I actually don't believe a nationality is anything to be proud or ashamed of, it's not an acheivement. I don't reject it either, no matter how well assimilated I can be to my Czech life, I am and will always be Argentinean.

I didn't leave because of financial, social or political reasons, I left Argentina because I simply hated living in Buenos Aires. I wouldn't have had any problem with moving somewhere else within the country (Mendoza comes to mind), but it was Prague that gave me the opportunity first and I don't regret having taken it in the very least.

One of the things I do regret is missing out on the craft beer revolution that slowly seems to be sweeping the whole country. Before I left the term "Craft Beer" had just begun to be heard out of the stricktly specialist circles. Back then I was not the beer geek I am now, so I didn't pay too much attention to it. It wasn't until 2003, during my first and so far only visit to Buenos Aires, that I finally tasted the local craft beers. Back then I was already pretty pampered by the Czech beers, and I even found the locally celebrated Warsteiner rather tasteless. But that dark beer that I had at a pizza place in San Telmo, whose name I can't remember, wasn't at all bad. And that was it. Today, all I can do is to follow the developements of the industry thanks to Logia Cervecera's excellent blog.

You can imagine then my excitement when my friend Claudia brought me four samples. I didn't know what to expect in terms of quality. Claudia confessed she didn't know anything about beer and in Argentina, as in everywhere else, you can find a bit of everything, from the very good to the utter crap. Between 2003 and now I had only tasted two samples from Green Belly, one of which was contaminated, the other, an APA, I liked a lot. 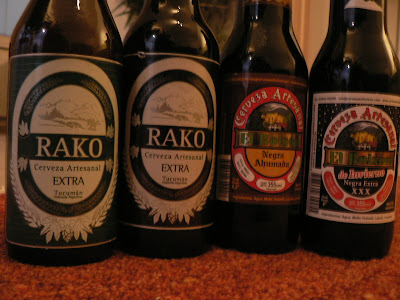 I started with the two samples of Rako that, like Claudia, is from Tucumán, a province in the Northwest of the country. The first I opened was Pilsen Rubia Ale (?). You already know the (little) importance I give to styles. but if any of you wants to shout that if the beer is an Ale it can't be a Pilsen, I will agree. It is exactly what I said (though in a low voice). Then I started wondering: what if the beer was brewed using a Pilsen recipe, together with a (triple?) decoction mashing, and then some Ale yeasts are tossed in. This could have been an interesting discussion topic had the beer I had in my glass (the only truly important thing) been the least interesting, but it wasn't. 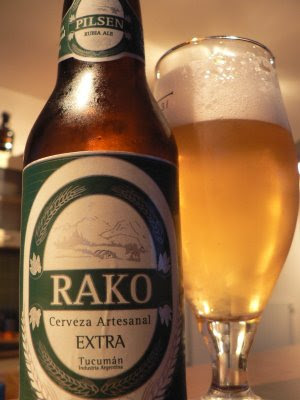 Pours a pale gold, a bit cloudy with very finy bubbles going up from the centre of the glass. Reminded me a bit of Duvel. The nose is mostly grainy, with a bit of fruit, pears perhaps. Very thin body for a beer with 5,5%ABV. Sweetish flavour, more similar to a wheat beer than a Pils. The finish is short and slightly sour. The bitterness is hardly there, like someone who just showed up at the office but can't be arsed with doing anything productive. Weak beer.

Having finished with the Rubia, I opened Brown Negra (what is it with so many Argentine brewers and their poor use of English when Spanish words could do the job just fine?). Also with 5.5%ABV, dark amber with a few ocre highlights. Little head, nicely tanned. Mild nose, sweet coffee and a bit of apples in caramel. Caramel commands the palate, with some notes of chocolate and oldness (it wasn't very fresh). The finish is of a mild sourness that gains in strength as the glass goes down. It leaves a not very pleasant sugary aftertaste. 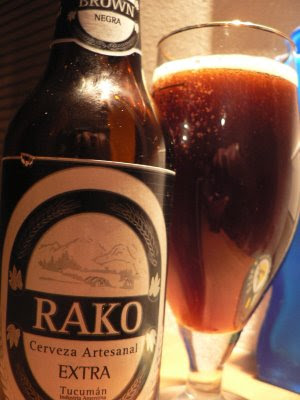 Neither one, nor the other won me over. I don't think they were that well made, but also pretty boring. I can understand the latter. Argentine craft brewers are forced to adjust their beers to the tastes of the market, which aren't the most sophisticated. That also happens here, in the Czech Republic. U Medvíku's brewmaster told me once how he had to tone down the hops in OldGott because some patrons were complaining; and I'm sure the changes in the latest edition of Sv. Norbert's Christmas Special were due to the same reasons. Those of us who have more adventurous palates complain and suffer, but we are a minority and a brewery is a business.

El Bolsón is a town in Northen Patagonia, and its surrounding region is to Argentine beer what Žatec is to Czech Beer, that is, where the finest hops come from. It is also one of the first names I remember asociated with the term "Craft Beer". In fact, according to their website, the brewery has been working since 1984. If all that wasn't enough, the two samples I have looked very interesting Negra Ahumada a rauchbier with 6.2%ABV and Negra Especial XXX de Invierno a winter beer with an impressive 8.1%ABV. Neither of the beers are for the average consumer, I would say. 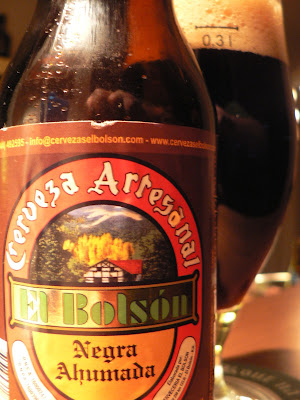 Unfortunately, I can't judge either of them. They were off. Cider and dust were predominantly felt in the nose and the sourness instead of giving a more interesting twist to the beers (it does happen sometimes) made them very close to undrinkable. The sell by date was November 2008. I wasn't expecting to find something similar to Ratcliff Ale, but with only three months past the sell by date they were way too off. That's another problem that haunts many craft breweries in Argentina. Once the beers leave their facilities they loose all control over them, and often they end up at places where they are not given the proper care. 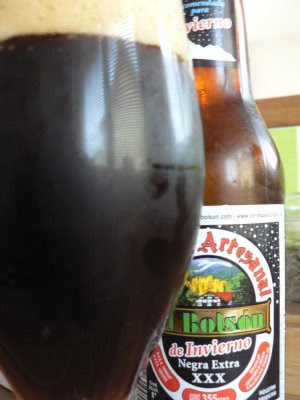 These stumbles will not discourage me. I still want to keep on tasting craft beers from Argentina. Who knows, perhpas, in the near future, a few of them might show up in Prague. Let's hope they will be better than these four.