By Pivní Filosof December 12, 2008
After coming back from Bělec we went to have a bite at a forgettable place and returned to Pivoňka to prepare the Christmas beer tasting, which was going to take place in the nice and very well conditioned cellar that the owner of the building lets Filip use for events like this. It is a very coze place, specially considering the nasty weather outside. 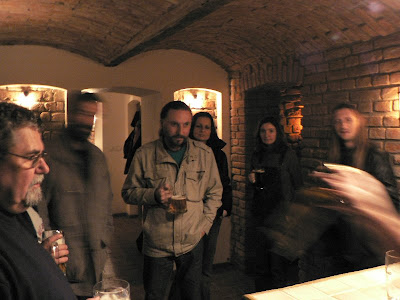 The samples were going to be five, two of them I knew: Opat 17° Sváteční speciál and Krakonoš 14° Vanoční Speciál. The rest would be something new for me: Holba Vanoční Šerák 13.51%, Janáček Vánoční speciál and Weltenburger Kloster Winter Traum, a German guest.

The attendants started to arrive. To warm up we started with Kocour Pale Ale, which I liked more than the last time I had drunk it. Very dry, but with a mild fruity undertone to balance it. Light bodied and very drinkable.One curiousity about this beer, the label lists rye as the first ingredient after water. 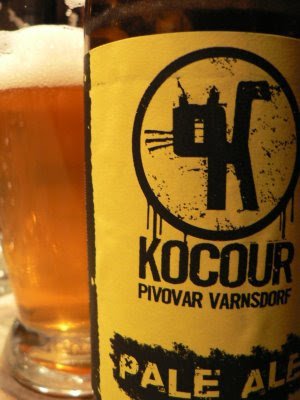 The first to come out was Janáček Vánoční speciál. When I saw the Balling graduation on the label, 14, I got a bit wary. Janáček brews the sometimes very good Comenius con with exactly the same graduation. It's not that I dislike Comenius, but it is a beer brewed all year round and not specially for this season. Other breweries do that, just sticking a label with a Christmas motif on one of their regularly brewed beers, and I was afraid Janáček was one of them. I couldn't have been wronger. Instead of the Comenius golden colour, this Vánoční speciál pours amber. Nose with malt and light caramel, with some clove and mild citrus notes. Caramel welcomes the drink, though more on the syrup side, everything changes in the finish, bitter, dry with some spice. Surprising and very tasty. 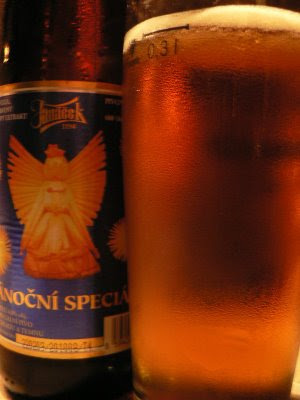 Then came Holba Vanoční Šerák 13.51%. I was not expecting much at all. So far, I hand't drunk anything from Pivovar Hanušovice that I liked. I had another surprised. As the previous one, this one is also amber. The nose here was a fine balance between caramel and citrus. On the palate it starts syrupy to finish with intense bitterness that reminded me a little of a Czech made IPA. Far from being wonderful, there was something a bit out of tune in it, but still drinkable. I was able to taste it again a couple of days later at Pivovarský Klub and had the impression of drinking something else. No bitternes, no flavour, it seemed like something overcooked. It also made me loose some face when I recommended it to Velký Al, who, well, was very unimpressed. Strange. I think I will try to find it again, maybe the people of Holba made a mistake and sent something decent to Hrádec. 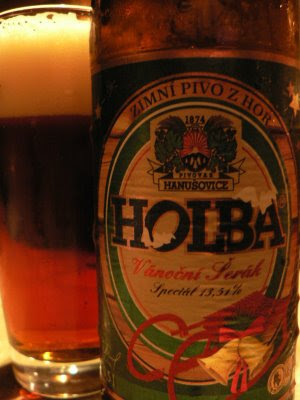 From the third sample on, things went dowhill. Krakonoš 14° Vanoční Speciál is an old friend, also brewed for Easter. Though it's never managed to amaze me, I've always liked it, I've always seen it as a solid and reliable beer. I would really love to know what happened to the giant this time. How little I liked this beer! It felt as if they had put it out too soon, and reminded me of that 14 day CAR that I had tasted a few hours before. It both smelled and tasted rough, like something not properly cooked that was opressing all the rest and made this a not very pleasant drink. A pity. 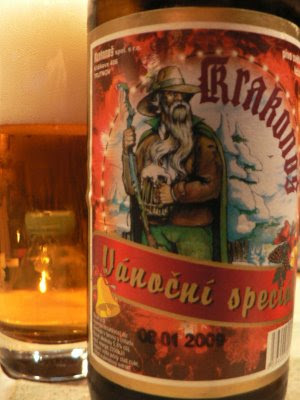 What followed was the most confusing bit of the evening. Opat 17° Sváteční speciál. I had tasted this beer last year and had really liked it, so much so that I was looking forward a lot to drinking it again this year. All my expectations fell to the floor when I saw that what was pouring down in the glass wasn't the amber liquid I knew, but something of pale gold. My suspicion proved true when I took the first sip, this was another beer, literally. There was no way that what I had in the glass was something brewed at 17°balling. Someone must have put the wrong label on the bottle. I didn't even finished it. I got a bit sad, Opat is a brewery that I really support. That sadness wouldn't go away until a couple of days later when I drunk this beer again at Zlý Časy and found that beer I had liked so much a year ago. Just as Evan Rail says in his excellent review, this is a beer with very special aromas and flavours. 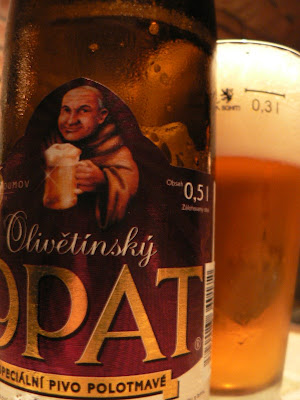 Perhaps the one I was the most curious about was Weltenburger Kloster Winter Traum, from Germany. Actually, I almost picked a bottle to take home. Good that I decided to wait until after the tasting instead. It can only be described as boring, something brewed without any enthusiasm. Of special, it has very little. Any average pale 13° Czech beer has more Christmas credentials than this one. 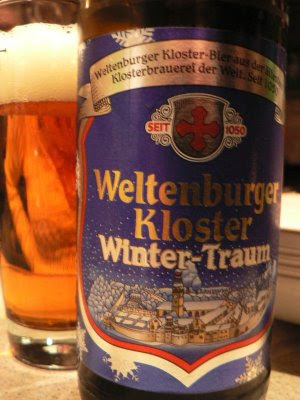 It was already after 10PM and we still had the long way back home. It was time to say good bye to Filip and the rest of the crownd, among whom was Josef, from Minipivovar U Hušků. We had a really good time in Hrádec Králove, a town I recommend everyone to visit (regardless of their lack of Christimas spirit) and where I will sure go back. Thanks again Filip for inviting us. All the fortune in the world for you and your enterprise.