By Pivní Filosof November 19, 2008
Most Czech craft breweries seem to be satisfied with the brewpub business model. Which means that if someone wants to taste their beers they will have to go to their source or, if they are lucky enough to live in Prague, wait till someone brings them over. Many bottle their beers in PET containers, more as something to take back home as a souvenir and drink soon than something that you would want to store and sit down to savour at ease. The material of the bottles will not allow for very long storing. Only very few will offer their products in proper glass bottles, that will still be only available at the brewery.

That is why when I saw a few bottles of Harrach at Pivovarský Klub, I didn't think twice to take one back home despite of the pretty high price (I will get back to that later)

The beer pours down light amber, almost gold, foggy. In the nose there is caramel, fruit and lots of citrus, very pleasant and fresh. There is still caramel on the palate that looks like is going to be overwhelmed by an intense citrus and herbal bitterness, which never happens. The finish is a well balanced mix of all the above. I liked it, it is a very pleasant beer to drink in the afternoon. 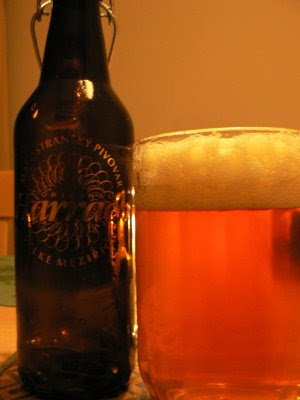 I don't know if you've noticed that I didn't mention any technical data of the beer. It isn't because I forgot to write it down, it's because I have no way of knowing it. The bottle has absolutely no factual information about the beer. When I bought it I didn't know if I was taking a pale, amber or dark beer (the last one was discarded once I put the bottle against the light). And I'm still not sure what kind of beer I drunk. A lager, almost certainly; barley mal and hops, most likely; 14°Balling probably (no, my palate is not that refined, but they were tapping a beer like that when I bough this one), but they are all educated guesses.

I can understand that costs are too high to print sticky labels, or it might simply be that they don't want to put them due to esthetical reasons, but they could at least tie a piece of paper that will give us some information about the brewery and their products, specially the one that we have just bought, more so if you had to pay 93CZK for it.

Yes, 93CZK for a bottle of Czech craft beer. If the beer is worth that much, I will leave you to decide. If you asked me, though, I'd say no. Not because of the quality itself, but because, apart from the lack of information issue, it could have easily been cheaper. Pivovarský Klub is not the cheapest place to buy bottled beer, yes, but I had to believe them (and why would they lie to me?) when they told me that the brewery had sold them those bottles at retail price. And it's not the first time I heard something like that, and about other breweries. What are they thinking? I would really like to know.

Sometimes I think Evan Rail is a bit too hard on Czech craft brewers and their lack of marketing skills, but cases like this make me see that he is indeed onto something.