And the winners are...

By Pivní Filosof November 21, 2008
I chose to publish the list of winners separated from the previous post because I want to speak about about the awards. Analyse them, if you wish.

I don't care too much about awards and medals of any kind, but these ones are for me of some importance because they are given by the association that represents consumers. I'm not sure how Sdružení přátel piva choose the winners, nor what criteria is used for some of the awards, and though many are questionable, I have no doubt of the honesty of the people of SPP.

So, here they are.

Jedenáctka 2008
First: Ležák 11° from Pivovar Klášter
Second: Otakar ležák from Polička
Third: Svijanský Maz from Svijany
I might like Otakar a bit more, but I think Klášter is a fair winner, after all it is the fourth time in a row that they take the prize.

Speciál 2008
First: Primátor Exklusiv 16° from Pivovar Náchod
Second: Kvasar from Černá Hora
Third: Démon from Lobkowicz
This is a difficult category, Speciály are those with at least 13°balling, so the range is huge. It is enough to have a look at the list above to get an idea. Exklusiv (well deserved) is a pale strong lager, Kvasar is also a pale with 14°balling and with honey and Démon is a 13° polotmavé.

Tmavé pivo 2008:
First: Budweiser Budvar tmavý ležák
Second: Speciální černé pivo from Bernard
Third: Svijanská Kněžna from Svijany
Here I don't agree at all. Budvar tmavé is a fine beer, but it's not even close to the one from Bernard or Herold, that wasn't even mentioned. Besides, this is a category that should be broken down since it scopes all dark beers regardless of their gravity.

Minipivovar 2008:
First: Prague’s Klášterní Pivovar Strahov
Second: Pivovarský dvůr Chýně
Third: Malostranský pivovar in Velké Meziříčí
Another that wins back to back awards. The beers from Strahov have improved considerable in the last couple of years. However, I think Chýně brews more interesting and daring beers. 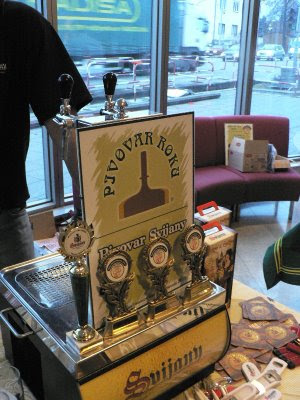 Pivovar 2008:
First: Svijany
Second: Budweiser Budvar
Third: Pivovar Náchod (Primátor)
This is one of the categories for which I don't know what criteria was used. Does Svijany deserve the award? Stricktly beerwise, they haven't done anything new recently, on the other hand, they have grown a lot. More and more people know and appreciate their beers every day. I think that, to a certain extent, they have taken Bernard's place as an alternative brewery in the mind of many consumers. Budvar as second, not a chance, they haven't innovated, they haven't grown, they haven't done anything new worth mentioning. Primátor should be in their place (if not first) 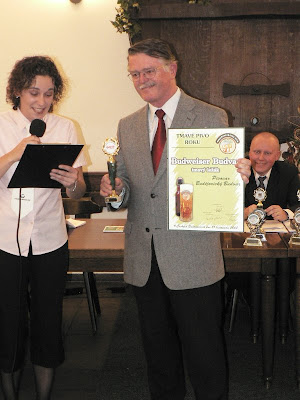 Sládek (brewmaster) 2008:
Ing. Josef Tolar from Budweiser Budvar
There is no doubt that he is someone who does his job very well. The question I have is wether he would still be able to brew Budvar the same way if the company was privatised.

I don't know what you think.