If it wasn't for the beers

By Pivní Filosof November 25, 2008
And if it wasn't for Iain and Ian, whom I ran into the other day at Zlý Časy, I would have never known about U Slovanské Lípy. I rarely go to that corner of Žížkov. So, when they told me that there was a hospoda there that stocked the beers from Kout na Šumavě, I made a mental note to visit them as soon as I could.

The place is located right by the entrance of the tunnel that connects the famous Prague 3 neighbourhood to Karlín. I go there for a late lunch. There was hardly anyone in, only two tables were taken, one of which would empty soon.

Despite having opened only a couple of weeks ago, the pub doesn't seem to have changed much since the days of the Soviet occupation following Prague's Spring. Everything looks tired, even the light that comes in from the windows.

Fortunately, that doesn't apply to the service. As soon as I found a table the waitress came to take my order. I started with Kout 12% (25CZK/0.5l), a beer that I hadn't drunk since the Slunce ve Skle festival two months ago. Although it was not very well tapped (too much top pressure?) I still found it a superb ležák, mild caramel, some fruit and a wonderful finish that is all Saaz. It is the kind of beer that I'm sure Václav Berka wishes he was still able to brew, but that, unfortunately for us all, he isn't allowed anymore; which makes me appreciate beers like Kout Světlý Ležák even more. 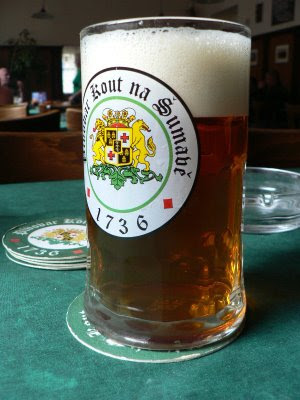 My Smažený Sýr with krokety arrived. I accepted the suggestion of the waitress and ordered another pint. Nothing out of this world the food was. The cheese was fine, but the croquettes didn't taste all that fresh, they had that typical flavour of something that has been fried in oil that has been used a couple of times too many. The veggies that were in the plate looked as tired as the rest of the place.

I didn't feel very much like staying, but I still wanted to taste something else; something I had never tasted before. Kout 18%, which to my surprise costs a whopping 60CZK/0.5l and 36CZK/0.3l. I chose the smaller measure, it turned out to be a very good idea. No, no, no; not because the beer was bad, quite the opposite, but because is incredible powerful. Dark amber with some ocre, not much of a head, but what it is, is very compact. Intense nose with a mix of berry jam, marmalade, cinnamon, nuts, coffee and caramel. The flavour reminded me to maraschino cherries, together with winter spices, coffee and fruit in syrup. The finish is dry and I found it somewhat similar to Fernet or Jägermeister. Here I felt the alcohol to be a bit out of tune, but a attribute it more to the tap and not to what comes out of it. This beer is a slow drinker. Closing my eyes I could almost picture myself sitting next to a fireplace and not in the anatmospheric pub that I was. I thought it was the ideal winter beer. At that price, I don't think they will sell much of it, but to me it is certainly worth it. 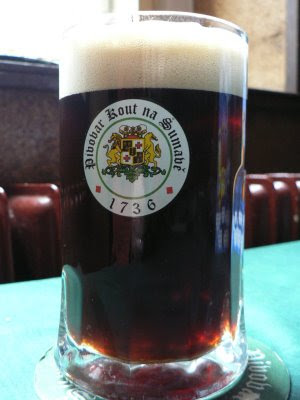 I can't see U Slovanské Lípi becoming one of my favourite pubs, but with these beers (besides the above mentioned, they also tap 10% at 18CZK/0.5l and tmavá 14% at 26/CZK, no kvasnicové unfortunately) it will be very hard to resist. There are no other pubs in Prague that stock this brewery regularly (wish that would change soon). In the meantime, I will have to take what is already being offered and close my eyes a little while I enjoy. 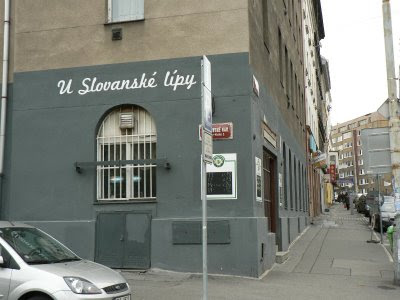