It's good to be me

Like last year, I was invited to the annual award ceremony of Sdružení přátel piva, or SPP. I'd had a lot of fun last time, so you can imagine how much I was looking forward to this one.

The meeting point was once again Hotel Beránek, near I.P. Pavlova. I got there a few minutes after 10, greeted the familiar faces and went to the table where some snacks and drinks had been served, and then to the fridge to pick a bottle of Pivo Hotel Beránek, actually Chodovar Zámecký Ležák with another label, which was not at all bad. There were some bottles of the superb Chýně Dvorní Ležák, which also got my attention.

The rest of the guests arrived, ate and drank and a bit after 11 our bus was leaving to České Budějovice, where the event was going to take place. It was a very long trip due to the traffic. We used the time to chat and gossip (I could have some material for a post from that). When we finally arrived we were all thirsty and hungry.

Tomáš Erlich, SPP chairman, was waiting for us at the door of Buějovický Budvar's administration building. Everything was ready. In the hall there were stands from Bernard, Svijany, Rohozec, Strahov, Klášter and Polička, and also the beers from the host, that were available in the taproom. Last year's lineup was probably better, but, hey, who am I to complain. 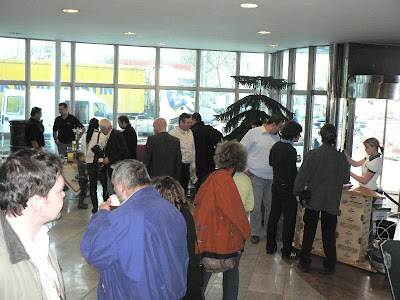 We immediately focused on quenching our thirst. I raided Polička's stand to have a glass of their delicious Otakar 11. From there, to Strahov's, that were tapping, together with their wheat beer, their Autumn special, a 16°balling dark beer that I found considerably better than last year. A lot hoppier, but still with enough caramel and chocolote notes to make it very well balanced and incredibly delicious. No doubt, the beer of the day, well, almost. 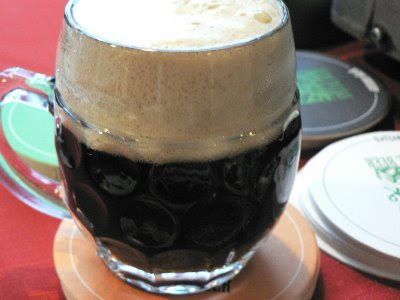 The award ceremony started soon and without much of a fuss. It took place at the taproom, which was full of guests and several celebrities of the Czech beer world. Once the awards had been handed (of which I will talk later), food was served. It was very good. The buffed included different kinds of salads, utopenec, tlačenka, guláš (a bit bland for my taste) and the star, Prague ham carved from the bone and served with mustard and fresh horseraddish, simply wonderful (unfortunately, it disappeared quickly). For those with a sweet tooth, there were koláčky (little pies) that were also very tasty. 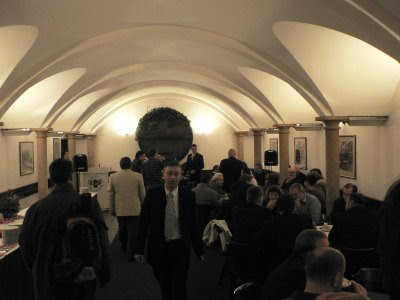 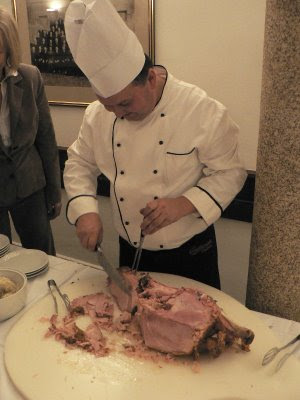 Perhaps the most interesting bit of the day was the tour to the bowels of the brewery with the head Master Brewer as a guide. Giving for granted that everyone there knew how beer was made, and about the brewery itself, Master Josef Tolar focused on technical aspects of his trade. There were a couple of things that caught my attention, first, Budvar must be one of the few breweries of its size in the world that still uses 100% Saaz hops flowers, no pellets or extracts, for all their beers (except Pardál that uses Angus, also in flowers). Their Ležák must be one of the few industrial lagers in the world that is still spends up to 90 days in the lagering tanks. It was also interesting seeing the newest of those tanks, they have a capacity of 3500hl, and it is said that you can fit a bus in them. 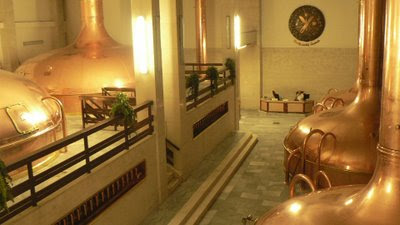 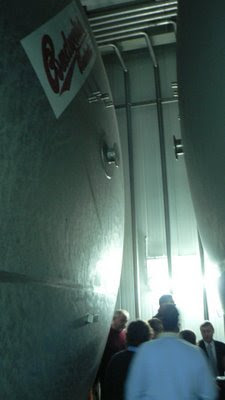 The best, hands down, bar none, was being able to drink Budvar directly from one of the lagering tanks. The date on them was 15/9, so it was a beer that had been lagering for already more than two months. Still unfiltered and unpasteurised, fresher than that impossible, a body and taste that were incredibly full. It was almost like drinking malt and fresh hops salad. I don't think it is possible to drink too much of a beer like that, but it fascinated me anyway, and being able to tap myself a glass straight from the tank was almost a mystical experience. 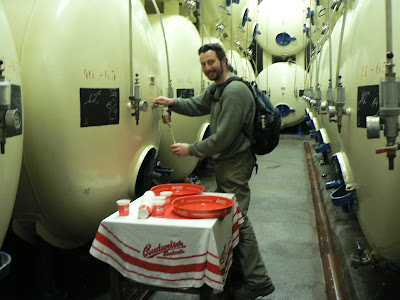 The tour ended T the bottling line. It is there where you finally fully realise that you are in a big industrial brewery. The noise, the smell of machine oil, the hectic and incessant activity couldn't be any more contrasting to the silence and the cold we had seen before. Anyway, it is impossible to be somewhat amazed, it is something hypnotic.

We went back to the party, we went back to beer drinking and fun having. I could chat a little with the young brew master of Bašta, who was very glad to know how much I had liked his beers last month. He was also very candid when I mentioned the low quality of those beers during summer. The problem, he said, capacity, or the lack thereof, something that haunts many a brewpub in the Czech Republic.

I also had an interesting conversation with Petr Samec, PR Manager od Budvar, a very friendly and very professional bloke. I asked him if they were planning to come out with some new product. The answer was affirmative, but we could not tell me what it was about. I didn't want to push any further, I understand his position. However, when I mentioned Master I noticed an interesting reaction, and after a silence that was a second too long, he smiled at me and went on with his "no comment" line, all while looking a little like a kid that got caught in a lie. Could it be then that they are preparing some high gravity beers, be it under a new brand or under a refreshed Budvar Strong? If that happens to be the case, you know where you've read it first.

We started the way back. For those who stayed, the party went on at a very famous restaurant in Budějovice, I wanted to go back home and cuddle with my wife. During most of the trip to Prague I had the most interesting conversation with Tomáš Mikulica, Chýně's brewmaster. He told me a few of his secrets, about which I will talk after the visit I promised to pay him soon.

I had a great time, it was a fantastic day. Many thanks to Tomáš Erlich and the good people of SPP for having me invited.

PS: The llist of awards will be published in a separate post. It would have made this one too long, and I have a few words about the winners, too.