By Pivní Filosof June 17, 2008
At first sight Privní Pivní Tramvaj (First Beer Tram) might look like a dive, and maybe at second and third sight as well. It's located right next to the last stop of tram 11, in Spořilov, the northern end of that monument to twisted Communist social mentality that is Jizní Město, an endless forest of paneláky that can bring down even the most upbeat character. It can't be any further from the tourist crowds. 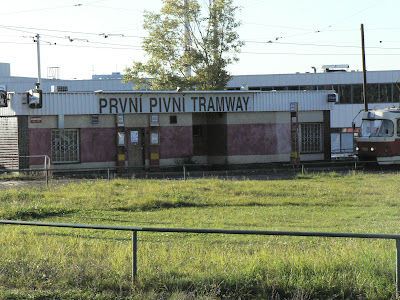 After gathering a bit of courage and walking in, we can see that, what looked like any other of the millions of Gambáč pubs, is actually something much more interesting. We can notice a very particular atmophere. It's a small place, its chairs are actually benches rescued from old trams and the walls are decorated with paintings and rock posters. It's eeriely quiet in the afternoon, you can almost start to miss the almost dispossed local drunkard loosing his last coins at the fruit machine while cheap vodka, but that's just for a second or two. 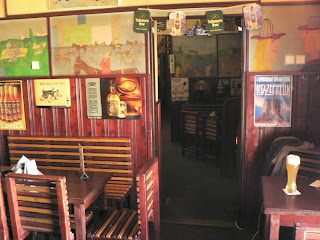 Surprises don't end there, though. Beer is what brought me to this SPP hospoda of 2006. Of 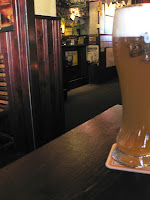 course they tap something else and better than the usual stuff from Pilsen, I wouldn't have gone all the way there if not. There is Primátor Weizen at 26Kc for a very well drafted pint. That might be enough, but there's more; the fourth tap. This pub must be the pioneer of the rotating taps in Prague. Anything can be found there, on my last visit they had Opat 12° kvasnicové, a very fruity light amber beer that can be almost chewed.

It's really worth going all the way there. I don't think the service speaks any language other than Czech, but they are really friendly and I don't think they will mind a few barbarians visiting in small numbers.
První Pivní Tramwaj
Tram 11 - Spořilov
opens at 2PM