By Pivní Filosof June 24, 2008
This is another one of those beers that I didn't like at the beginning, that I always tried to avoid. Zlatopramen 11° was in the list of my least favourite beers. But as it was the case with Platan, at some point something changed for the better and I stopped running away from it.

Zlatopramen is the flagship brand of Drinks Union, Heineken's brand new asset, joining Krušovice and Starobrno. It was actually this beer that started the trend of jedenáctký. Now, there are only a handful of breweries that don't make a 11°balling beer, in many cases they are almost indistiguishable from the 10° or 12°. Such was the market success of this beer that made Zlatopramen, once some sort of cheaper version of Březňák, be favoured by DU's people. Much is owed to the advertising campaigns and the slogan "O stúpen lepši" (a degree better). This is a beer that aims to compete with the most popular desítký, nothing too ambitious in quality terms.

The other day I fancied drinking something different with lunch at home. I was nearby one of the outlets of one of the local supermarket chains and I decided to go it to see what they had. I wasn't surprised (neither happy) to see that it's easier to find imported rubbish like Heineken, Stella Artois or even Corona (?!?!) than Czech regional beers. I took a bottle of Zlatopramen 11° because it had been a long time since I'd drunk it last. 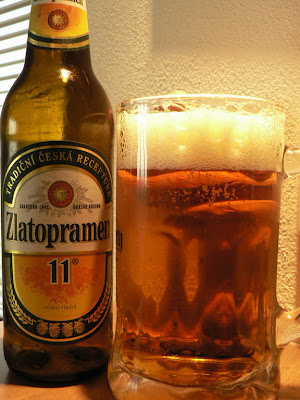 When pouring down it builds a nice head, that stays there for quite long. The colour is deep gold, and has very little carbonation. A pretty handsome beer. On the nose I felt some mild caramel playing together with equally mild sweet cream notes, all as some sort of garnish for fruit like pineapple. It goes in mostly fruity and caramelly, and it ends in a more bitter herbal note, very pleasant I would say. It's not a beer I would actively seek, but I wouldn't walk away from it if I was thirsty on a Summer day. Neither would I put any objections if someone suggests it as a session beer.

The biggest mystery is what will happen with this beer, and the others from Drinks Union, once Heineken finally takes control. I hope they go the Starobrno's way and not the Staropramen's.