By Pivní Filosof April 11, 2008
Every expat and immigrant who's been here for a few years had to go there at some point. At the courthouses near the metro station Pražkého Povstaní is where we had to go to get our police record certificate. It many might have been there around noon and felt hungry. Some might have noticed Táborka on the opposite side of the tramway tunnel. Few are those who actually ventured in.

I'm one of those. I think I went there after that first time I was in the neighbourhood. It was a down at heel hospoda that during lunch time was teeming with workers from the area. They had cheap, tasty and more decent food, washed down by good Nymburk beers.

During those first months I would go rather often because I had a student nearby. I hadn't been there since then, and I had actually almost forgotten about it. I noticed it again when I went to deliver my tax return and decided that I had to go back. The excuses, a bit of nostalgia and being able to sample Postrižinské Pivo at one of the few places that stock it in Prague.

It was shortly after twelve and I was surprised (not pleasantly) to see the place almost empty. The only patrons were three Ukrainians that had sure been at courthouses. I took a table in the back and noticed that there had been some changes. Some of the tables had been replaced by a dodgy looking billiard table and a couple of fruit machines. The only decoration on the walls were pictures from the film Postrižini(*). All this, together with the cheap furniture, gave the place a strange atmosphere.

But I was already there and I decided to stay. Soon a very nice and friendly waitress came bringing the lunch menu. I ordered a jedenatcká světlé (11°balling gold lager) and the guláš, without having many hopes. 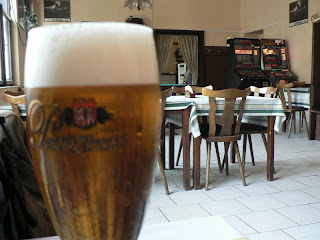 My mood changed with the first surprise, the beer. I had been expecting something lot of carbonation and little taste. What I got was the complete opposite. For Czechs, tapping beer is almost an art form. This pul litr of Nymburk 11° was a great example of that. No visible carbonation, a thick microfoam that was still there when I emptied the glass and left almost a Belgian lace. A velvety mouthfeel that would caress my palate. Perfect temperature, I drank it in two or three swigs. Regarding flavour and aroma, nothing special here. The nose had some apples and cereal backed by very subtle sage notes, all very mild. I could say the same about the taste. Everything mild but very well balanced, very refreshing.

I ordered another glass when the guláš was brought. And that was the second surprise. I had been expecting a watery sauce with ghostly flavours, with hard stringy meat. What was on the plate was a wonder of hospoda cuisine. A perfect balance between sour, sweet and spicy, the sauce had almost the perfect thickness. The meat was tender and tasty. I think it took me half a minute to clean the plate. It wasn't as gorgeous as that one I had in Chýně, but it was not that far either. I should have probably ordered a dark beer to go with it, but, to be honest, it didn't give me much time to drink.

The prices, for the kind of place Táborka, are a bit high. 23CZK for a pint, when at Bašta, about 300m away, their home brewed beer costs 25CZK; or at the also nearby Klokočníka a pint of Kácov will go for 15CZK. The same could be said of the guláš, very good, but at 73CZK too pricey for the place.

I can't decide whether I liked Táborka or not. The food and the beer were very good, but I never felt comfortable there. I certainly won't go in the evenings. I could go back for lunch, but only if that guláš is there again, and I might stop for a quick pint if I'm around. 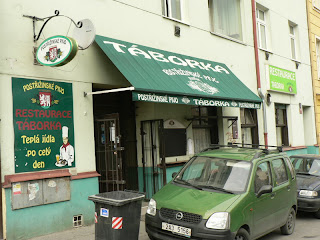 (*)Postřižiny (Cutting it Short), is a comedy directed by Jiří Menzel, based on Bohumil Hrabal's writings. It takes place in a small town during the First Republic (1918-1938). The main characters are the quality inspector of the local pivovar and his wife, supported by a colorful gallery of locals. It is a beautifully funny film that also shows a very interesting side of Czech beer culture. Oh! And that man who sees it and doesn't fall in love with Maryška, the main character, is either made of stone or should start to question his sexuality.