By Pivní Filosof April 04, 2008
If someone had asked me a few months ago about Klášterní pivovar Strahov I would have advise them to avoid it.

It's got a great location, within the walls of the Strahov Monastery. I've known it for for a long time, but it's a place I've never visited often. The restaurant never had much of an atmosphere going on. The beers brewed in the house were good, but not worth the 59CZK for 0.4l glass.

I must put emphasis on this. I've never disliked the beers, but I've always known that for less you could get better pivo at other brewpubs in Prague. They lacked character and personality, their flavours not intense or interesting enough. Every now and again I would drop by just to check things out. My opinion was always the same. And apparently not mine only, several more people would say that those beers are not worth that much money.
Things started to change one day. I was with friends and Pivovarský Klub and they were tapping one of the beers from Strahov. I thought I would give it a chance and I was pleasantly surprised. Its flavours had gained intensity and character. I had it again a bit later, at the SPP's award ceremony, and I loved it. So much so, that I chose it as beer of the month in my Spanish blog.

I had to go back and see if the beers had actually improved or if those I had drunk elsewhere, had been happy accidents. It was near Christmas time, and having their season special for the first time was a very good excuse to get myself there.

I wasn't disappointed. Svatý Norbert Jantár was still very good. It still had that intense nose full of grapefruit and herbs. I could still feel my mouth being invaded by citrus followed by caramel, almost honey, notes. A much improved piece of work. 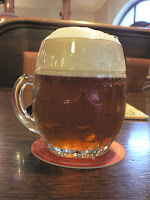 The Svatý Norbert Vanoční special was a revelation, though. This dopplebock fermented at 19°balling, 7.7%ABV, is a dark amber with a think head and almost no visible carbonation. That day the alcohol was a little unbalanced in the nose. It was the first thing I felt, and it almost overwhelmed the citrus and tropical fruit notes that I think should dominate. I got myself ready for a terrible disappointment. I couldn't have been wronger. The alcohol was still there at first, though it could have been attributed to a lingering feeling in the nose. Then, almost in a velvety fashion, I started to feel fruit in syrup and some caramel. I wasn't prepared to what followed next, an explosion of hops that demolishes everything that was before. The bitterness intensifies after swallowing. It almost made me close my eyes. It might not be to everyone's taste, but so much bitterness blew my mind. I wanted to have another sip, but the hops hurricane that I still had in my mouth hadn't abated. I don't think this beer can be drunk fast, it will not allow you. It wants, it demands, you to enjoy it. Well worth the 69CZK charged for it back then. 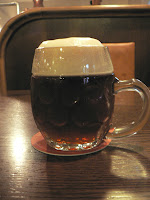 I've tasted the bottled version of the autumn beer. I liked it, but I thought there was something missing for a beer of its kind. I look forward to drinking it draught this year.

And this year, in my latest visit to the brewpub, I've had their Velikonoční Pivo, also called Speciální světlé pivo. I liked it, I liked it a lot. Deep gold, unfiltered, looks beautiful. Smells better, a lot of Saaz this beer has, feels almost like fresh grapefruit together with flowers. Lovely. Continues on the same tune when drinking it. The Saaz is there, dominating, but at the same time well balanced with fruit notes. It leaves a long, strong, bitter and beautiful aftertaste. I found it too fizzy, as I found the Jantár I also drank. But I've decided to attribute that to some dodgy tapping. 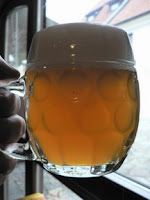 The issue I still have with these beers is the price. As good as that golden lager was, I didn't find it much better than that at Pivovarský Dům. In Strahov, I had to dole out 59CZK for a 0.4l glass (why that size, when Czech beer is mostly drank in 0.5 or 0.3l doses), while in Dům a pint will cost me 35CZK. As good as Jantár is, it's no better than Oldgott Barique, that at the brewery is tapped for 48CZK a pint.

Can location justify the prices? To some extent. You can certainly do a lot worse in Hradčany, and I mean paying 60CZK for 0.4l of Krušovice Černé (hardly a craft beer). But U Medvídku's location is almost every bit as good and their amber 13° is considerably cheaper.

The lame atmosphere and the less than satisfactory service don't help their cause very much either. To their credit, the food does look good and the prices are pretty reasonable for the area.

If you asked me about Klášterní pivovar Strahov now, I would indeed recommend it, but with some reservations.

If only their beer was cheaper and in the right size.... 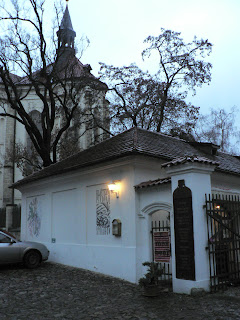