By Pivní Filosof April 18, 2008
I had hesitated to attend this month's beer tasting. I went mostly because of the people and the atmosphere that they generate at Pivovarsky Klub the third Tuesday of every month. It was because this month's guests was Pivovar Žatec. I had already tasted most of their beers and, except for Lučan, I hadn't been the least impressed. So my expectations were pretty much at floor level.

I wasn't disappointed. This must have been the worst presentation that I've attended. For several reasons:

- Pivovar Žatec brews five beers on a regular basis. As you can see in the picture below, there are six bottles. That's because one of them, Premium, has two presentations, the classic 0.5l bottle for the domestic market and a 0.355l long neck bottle for export. They forgot to mention that, and If it hadn't been for Aleš Dočkal's very appropriate question (and it wasn't the only one of the day), we might have not known about it. The question that we all forgot to ask is, why then they have a beer called Export.

- They didn't bring Lučan, to my taste, their best beer. Personal opinions aside, their lineup is already pretty limited, so it is almost unforgivable that they didn't present it complete. Regardless of the apologies from the Klub for not letting them know they didn't have enough stock, it is the breweries fault for not asking about it.

- The general attitude of the brew master. If I compare it with other brew masters that talked at the other presentations, Mr. Bařtipán looked like the father of the worst student in the class at a parents school meeting. Of course he stood up for his beers, but it sounded more like obligation than conviction. Several times he mentioned that his beers were pitelné, which means drinkable in Czech. It might be that my Czech knowledge of semantics is not very sharp, but at least in English, saying that a beer is drinkable is not a big compliment.

- The general quality of the beers. Only světlé, almost a desítka (9.3°balling 4.1%ABV) stuck above the, low, average. It had a nice mouthfeel and a pleasant taste dominated by tropical fruit, mostly pineapple. The rest, as one dimensional as I found them before. Though I noticed Xantho a bit improved, but it might also be because it was the only one that had something resembling a distinctive flavour.

The brew master emphasised that they don't make cheap beer, that they don't use cheap ingredients, that their hops are supplied by the Žatec Hops Institute. When Aleš asked him why the beers from Saaz haven't got a character more according to what is expected from their origin, the answer was evasive and unsatisfactory.

The Žatec area has one of the oldest brewing traditions in the world. Registries show that beer was brewed commercially already in the 13th century, and the Saaz hops are known and appreciated all over the beer world. I think that the problem is on the ownership. The brewery was bought in 2001 by Englishman that wanted to have his own beer. He doesn't seem to care much about how it is made, though. 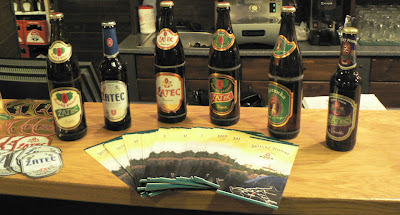 I would love to see Pivovar Žatec brewing beers that will honour tradition and origin. I don't see that happening in the near future. The brewery reflect the reality of the city. It could be beautiful, but it looks neglected, and its authorities don't seem to have much interest in improving it.

The best of the evening was, without doubt, the welcome drink. desítka de Pivovarský Dum. It was brewed to celebrate the 10th anniversary of the famous brewpub of Nové Město. A brilliant beer, something like a little sister of their wonderful Ležák. Maybe they still have it at the Klub, don't miss it.