By Pivní Filosof April 24, 2008
A Pilsner Urquell sign is not likely to make me walk in, a Staropramen sign is enough to make me walk away. What I'm I doing then in Nusle, metres from Nám. Bratří Synků walking into a dive with both signs at the door? What I'm doing going down the dark stairway even after having seen a flag of Beck's, the German version of Stella Artois? The answer is easy. Zlý Časy (Evil Times) doesn't stock Staropramen anymore, they stopped doing it because they were tired of the pressure of InBev's local minion, and because they got tired of selling the subpar beers from Smíchov. 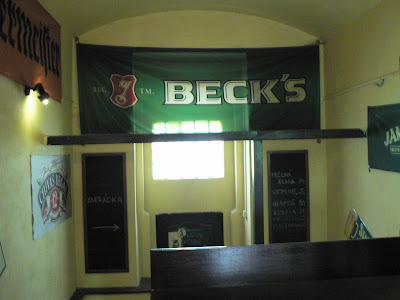 That is in itself good news, but not good enough to make me walk in. Now the phrase "Bohatý výběr piv" (wide assortment of beers) is. You will be excused to take the wide assortment bit with a pinch of salt, but in the Czech Republic there aren't many places where you will find more than two or three beers, usually from the same brewery or group. Here we have five to choose from, two or three of which rotating just like at Pivovarský Klub.

But before talking anymore about the beers, let me tell you about the place.

It is located in a dark cellar. The hall is rather small, no more than 10 tables. The decoration is like at many other neighbourhood hospody. Old advertising posters, bric-a-brac of all sorts (old radios and tellys, etc). Dark wood tables and chairs and benches on the walls. The atmosphere reminded me of "U Pětníka" (a pub in Prague 6 where I used to go too often for my own good at the times that Staropramen was still a decent beer). That made me feel very comfortable from the beginning. It brought (rather foggy) memories of the many good times I spent at that pub with friends.

The food is also typical hospoda. I've been there twice for lunch. On my first visit I ordered Svíčkova na smetaně, one of my favourites of česká klásika. This time, however, it was nothing to write home about. The roasted meat was dry and stringy and the cream and root vegetable sauce didn't have enough of those sweet and sour flavours that I so much like. On the second visit I ordered the guláš of the day. Here things improved. For starters, it was not served with the usual bread knedlíky, but with very tasty and house made bramboráčky. The meat was really tender and the sauce was spicy enough. Very good, really.

Of course both lunches were washed down with beer(s). On the first visit, apart from the regulars, Kácov 10° & 12°, they were tapping Opat Pepřové (pepper beer) and Vandorf Kocour Rauchweizen. The former, another attempt of Pivovar Broumov to come out with something new and original, but, just as with last month's medové, it fell short. It actually felt more pepper scented than flavoured. Fine to drink with the Svíčkova, but not so to have another pint. The latter, the Rauchweizen, was really good, on the sweet side and with a lot of banana notes. The smoked element was like some background music in the flavours and aromas. I liked it a lot. As far as I know, this beer was making its debut in Prague. Pivovar Vandorf Kocour is a new enterprise of Honza Kočka, the person responsible for the web page Svět Piva, the Beer Christmas Market and my finding this pretty cool hospoda. Honza also writes Pražské Pivnice (Prague's Beerhalls), a weekly column in the free daily 24. 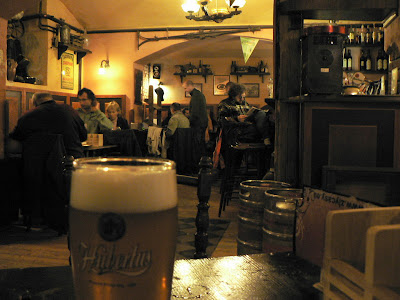 On my second visit they were tapping Kácov 12° Kvasnicové, which I had already tasted at U Klokočníka. And actually, at Zlý Časy they tap it much better.

I mentioned that to the owner, who is also one of the waiters and a pretty friendly bloke, and he was glad to hear it. It was he who told me the reasons why they had stopped stocking Staropramen. He also told me that after they are done with the last few kegs of Pilsner Urquell they still have, he won't buy it anymore. He supports regional or micro breweries, and he wants to sell those beers only. In fact, on Monday (28/4) he will be receiving a delivery of three beers from Zvíkov: Zlatá Labuť 12°, Zlatá Labuť 13° Černé and Zvíkovský Rarášek, the last two were among my favourites of last year. Of course I will stop by there to enjoy them.

It made me really happy to see that there are people who support real Czech beer, and that want to offer their clients something different and, probably also, more risky. With Pivovar Bašta a couple of blocks from there and U Klokočníka y První Pivní Tramvaj (I promise a post about this one soon) a few tram stops away, Prague 4 is starting to become a nice beer destination in the Czech capital. I really hope more hospody will follow soon.

Are the times changing? 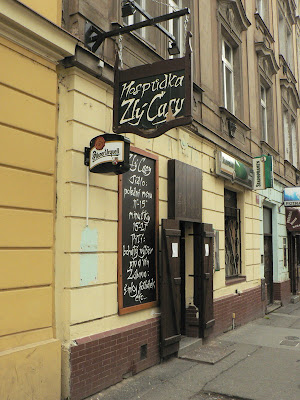