Pivovar Velké Březno and the region where it is located, Ustecký Kraj, have an interesting and troubled history. This region in the northwest of the Czech Republic used to be also called Sudenteland. The alleged persecution that the German ethnic majority suffered from the Czechs where used as an excuse for Nazi Germany to annex Czeckoslovaquia (not without the cowardly permission from France and the UK). During the brutal German occupation things didn't change much for the brewery, it was owned by Germans. In fact, they went pretty well, since it supplied beer to the Afrika Korps.

Once the war was over and the German population deported, the brewery became state property. And would remain so until the fall of the Communist regime.

Nowadays the brewery is part of the Drinks Union group, that also owns three more breweries (Zlatopramen, Louny and Kutná Hora) as well as a couple of brands of spirits.

In the last few years some of the beers of the group have enjoyed a relative success, specially Zlatopramen 11°. This has caught the attention of Heineken, who have expressed their interest to buy the group of Czech capitals.

History aside, I was given a bottle of a true rarity in the Czech market (for which I must thank Evan Rail, who will sure wite his review on his excellent blog), Březňák Dopple-dopple bock, brewed only for the German market. 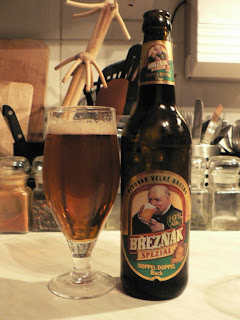 This powerful beer with 10%ABV and brewed at 21°balling is of of a deep amber colour, almost orange, and has barely any carbonation. It starts well. Continues better. Its nose reminded me of a fruit salad made with very ripe fruit and lots of sweet orange, with subtle herbal notes in the back. And it ends even better. The fruits in the aromas now take a more tropical turn, the flavours are intense and lasting, filling our mouth and inviting us to drink it slowly, and then enjoy its long bittersweet finish. A truly remarkable beer, ideal for desert and with the alcohol so well integrated that it is not felt at any moment.

I really hope Pivovar Velké Březno will decide to sell this excellent beer in the Czech Republic. I believe the market conditions are ripe, and that it will sure be a hit among those who like and appreciate strong lagers of good quality. However, if Heineken finally buys Drinks Union, things might not turn out for the best. I'd like to be optimistic, though, Krušovice seems to have improved a bit since Heineken bought it last year, and I can't complain about Starobrno, the other brewery owned by the Dutch group here.
Na Zdraví!!!