By Pivní Filosof January 29, 2008
Right before Christmas I stopped at U Medvídku to say hello to my friends there and to have a pint or two, of course. I was told then that they were lagering a new beer, a dark 16° that would be ready right after New Year's day. I asked Mr. Veselý about it and I would say that for an answer I got a bit of an early present.

He went to the lagering room, brought a bottle and told the waiter to bring two small glasses. He wanted me to try an experiment he had done with this new beer. He wouldn't tell me what it was, but wanted to see if I could taste anything different in that beer. What I could taste was a beer that had similar characteristics to the OldGott but hoppier. It was not ready yet then, but it was possible to feel how good and interesting it would be. However, I could not feel anything particularly different. It turned out that Mr. Veselý had filled a few bottles with this beer after having put some prune in them. Once he told me so, I was able to put my finger on a fruity flavour I had felt, but had thought it was part of the beer proper. Anyway, that afternoon I left the place really glad, and a bit drunk....

Things changed with the coming of the new year. The beer was not available yet. The reason, they had decided to put prunes in the end, and it was let to lager for one more week.

I happened to stop by to have my fix of OldGott and noticed that they were already tapping novoročné švestkové pivo (New Year's Plum Beer). Which of course became my second glass. 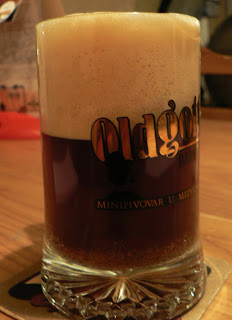 Just when this beer was being brought to me I see Mr. Veselý coming in. He was of course eager to know how I liked his new child. I got the glass closer to my considerable nose and the difference could already be felt. The aroma reminded me of prunes in syrup, and it's so intense that it is hard to distinguish anything else, yet it feels fresh and natural. It is when drinking it that this baby show its game. The first thing I felt when taking a long sip of this dark amber was, of course, the fruit, but then the whole thing changes. Unlike what happens at the nose, in the mouth the prunes are wonderfully well balanced with caramel and citrus notes, leaving the best for the finish, that is long and deliciously hoppy. Simply brilliant. I would love to drink this beer without the prunes, but I certainly can't complain.

What I can complain about is the price, though. 48CZK for a 0.2l glass is a tad too much, specially if we consider that you will pay the same for a half litre of the gorgeous OldGott Barique (that fortunately seems to be returning to its level after a bit of overselling during the Holidays). It's not that I'm cheap, as I've said before, I've got no problem paying 111CZK for 0.3l of X33 (68CZK/0.2l).

It seems I'm not alone. This wonderful beer is not selling as well as it should, and that is affecting its quality. I went back a few days later and when I ordered a glass of the plum beer, the waiter told me that I shouldn't because there were the last 10l in the barrel and it was going sour. When I tasted a bit, I had to agree with him. I think that if they sold it at the same price, but in a bigger measure, let's say 0.3l, people will order it more, and that would benefit both clients and brewery.

For what I've heard, the problem seems to be the owners of the place, who are not all that wise when taking marketing decisions.

The best of that first day wasn't actually being able to enjoy such beautiful beer, but being able to sit down for a chat with Mr. Veselý. I let him know what I thought of the beer and he told me about a few experiments they'd been doing with OldGott.

The owners want to do something new with their beers and this švestkové might be the first of more to come. Other flavourings were tried, some of them quite radical like coconut, orange and clove. The total was 19, and of the 16 Veselý had tasted, only plum and fig did the job.

There were three samples left, olive, turmeric and coffee, and when Veselý asked me if I wanted to taste them with him, guess what my answer was... He then went to the fermenting room and brought three small bottles and six glasses. We started with the olive beer. We were not expecting something good, and it didn't dissapoint. In fact, it was almost undrinkable, as many of you might have guessed. It was followed by the turmeric beer. Here things improved. We both liked the first sip, but when we took the second, it already felt like drinking cough syrup. The problem, too much of the spice, a bit less of it, and it could be a pretty interesting beer.

Fortunately, we had left the best for last. Pivovarský Dum has been making coffee beer for quite a few years now, and I like it a lot, but I liked this one better. We both agreed that it would be nice to brew it. Instead of brewing it with OldGott as base, the brew master thought it would be better to do it with the 16°, and I do believe he is right. He said he would start seeing how this beer can be done, and when I suggested that it would be a good idea if coffee beans could be added to the wort while cooking it, he said he would check it out.

It was a really nice afternoon. It made me feel really good to hear someone with the experience and craft of Mr. Veselý thanking me for my opinion and for my help. But now, if that coffee beer ever gets done, you now know who you owe it to....;)