By Pivní Filosof January 02, 2008
Considered among the best my many, though for many more Czech beer means not much more than Pilsner Urquell and Budvar. And unfortunate that is, Czech brewing art is a lot more, and a lot better than that.

Even when tasting the big three, the two mentioned above and Staropramen, one can notice a difference in flavours and textures (to be honest, you won't find much flavor nor texture in a Staropramen, but that is another thing). Yet there are so many different kinds of beer for a small country that suffered the ravages of 40 years of Communist dystopia, that Czech beer is still pretty much uncharted territory for many beer lovers around the world. The reasons are many, market dominance of the Big Three, most beers are hard if not impossible to find abroad, and the fact that, as happens in most countries, the more interesting and probably best beers are produced by small breweries deep in the country, some of them being virtually unknown here in Prague.

Anyway, before wading too deep in a sea of Pivo, let's start with the basics. Due to an ancient and now derogated law Czech beer is classified a bit different than in most other countries. It is common to see a 10% 12% next to the name of a beer, many foreigners believe that it is the alcohol content and thus think that Czech beer is really strong. It isn't true, that number corresponds to the Balling scale and means the percentage of sugars in the wort before beginning fermentation.

Although many brewers still make their pivo respecting that scale and use traditional methods, the big industrial bottlers, thanks to the adoption of modern technologies, have been able to find a way to use less malts and still produce beers with a same contents of alcohol by volume. Since then, beers have been grouped in three big categories. There are others, but they are often not worth trying, believe me.

Výčepní:
Usually called desítká (from deset, ten in Czech, 10° in the Balling scale) by most consumers, wether they've been fermented at that graduation or not. Their alcohol content is generally around 4% and are the most drunk and sold of all. Though, but for a few exceptions, lacking character and complexity of flavours, they can still be very good thirst quenchers and tend to be the pivo of choice when meeting your mates for an evening of serious drinking.
In recent years many jedenactký (jedenact = 11 in Czech), sometimes called Medium, have appeared on the market, for some brewers they are Výčepní, for others, they belong to the next category...

Ležák
The Czech term for lager. Though almost all Czech beers are bottom fermented, Czechs call this way, apart from the 11's, beers fermented, currently or historically, at 12° Balling, also called dvanactká (ý in plural), or Premium for some brewers. Tend to be the flagship product of bottlers and the most likely to be found in other countries.

Speciál:
Are called those beers brewed at at least 13° Balling. Not as easy to find as the other two, but gaining more and more adepts. This is the widest and most interesting of the categories, with beers ranging from 5.5% to over 10% ABV and fantastically good in many cases.

There is yet another category worth mentioning, nealko pivo, non-alcoholic beer. Thanks in part to stricter traffic laws and controls, a change in the lifestyle of younger people and good marketing, they are getting more and more popular, and I must admit that some of them have improved considerably becoming actually better than quite a few international industrial lagers.

But that's not it, there is more. Pivo can be světlé (light), poltomavé (semi-dark, amber or red) or tmavé - černý (dark - black). They can also be svatečný, a type brewed for the holidays of easter or christmas. Or nepasterované (unpasteurised), kvasnicové (yeast beer) and/or nefiltrované (unfiltered). Plus, they can be pseničné (wheat) or have other unusual ingredients such as med (honey), bylinky (herbs) or various ovoce (fruits). Oh! And I was almost forgetting! As I said above most pivo is spodně kvasené (bottom fermented) but there are a few (and more every day it seems) that are svrchně kvasené (top fermented), some of them being simply brilliant...
But I don't want to confuse you anymore, I'm thirsty already.... 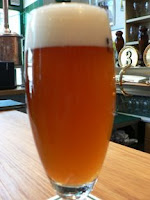