There seems to be something like a beer tasting epidemic going on lately. I don't think there is a day that goes by that I don't read about one somewhere. This has made me wonder whether these tastings add anything to Beer Culture, and the more I think about it, the more I believe they don't.

I'm not speaking here about tastings that are actually the presentation of a brewery; I'm fine with those, they usually give the chance to meet the people behind the beers and that's always interesting. I'm not speaking about beer dinners, either, those are actually culinary games where beer can be easily replaced by any other beverage and the result will be essentially the same, a new sensory experience for the partakers. It's the guided tastings what I'm talking about

I've already spoken about clowns like this one or this one, people who organise and host tastings and courses whose only goal seems to be to part fools from their money taking advantage of a fad while throwing disinformation around. Fortunately, there are serious people, who know a thing or two about beer and organise this kind of events with the best of intentions. Their goal is to enrich Beer Culture, to show beer as a beverage and not just a brand, etc. (and, sometimes, promote their shops, nothing wrong with that). Everything is cool, but then, I see a picture like this one below (source) and my heart sinks a bit. 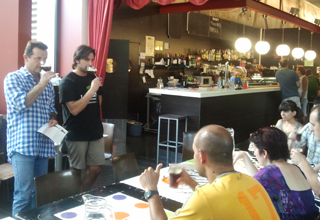 I've seen several similar photos, people sitting as if they were at a school, taking down notes and listening attentively to what someone holding a glass is saying. It is all so serious! Or at least that is the impression I get.
The biggest issue for me, though, is the way this tastings are usually put together. A bunch of different beers with little, if any, connection among them. The idea of this is to present the infinite variety the beverage offers. But you don't need a course for that, reading labels is enough to figure that out.
In my Facebook page, Alan McLeod recommended to skip this kind of events and use the money to buy new beers every month, trusting your own ability to learn and find your own interest. Wise words! Few things are more gratifying than those we learn by ourselves. And it is drinking beer what we are talking about, not computer programming! Specialised shops and bars often have people who are able to recommend and guide, all you need is to ask.
However, it is true that there are people out there who need to be taken by the hand and shown around, who are not all that comfortable with buying something they don't know much about and maybe, this tastings help them loose that fear. But they could be done differently. Pivní Rozmanitost, for example, sometimes hosts themed tastings of beers that fall into the same category or style. You don't need to pay much attention to realise that a Stout is very different from a Weizen, just a quick look is enough; but finding the differences in four or five beers that on paper are the same, that's another thing.
But even with this and other kinds of tastings, I believe that, generally speaking, this type of event adds nothing to beer culture. Look again at the picture. Beer isn't something made to be sniffed and sipped in 0.1l measures while listening to someone lecturing what we are supposed to be tasting and smelling; beer is made to be drunk and enjoyed. If the people on the other side of the counter wants to improve our beer culture, they should help us enjoy our beers better. Brewers should give us more information and work more with shop and pub owners so their beers will reach the consumer in the best possible condition. If they fail to do that, all the rest is just bollocks.
All this rant has brought up another question, a bigger question: Does "Beer Culture" really exists or is it only a fantasy that we love the believe and spread?
Na Zdraví!