I have joined the ranks of Ron Pattinson, Martyn Cornell and Velký Al, among other beer writers/bloggers. I have made a beer happen!

It all started last February when Gazza Prescott, from Steel City Brewing Co. was here on a visity. We met at Zlý Časy and where talking about the impact the crisis had on the financing of independent theatre, or something like that, can't remember that well, when somehow the talk drifted towards beer. Among many of the things we discussed was The Grim North, the result of Steel City's collaboration with the Catalonian micro Marina, which was quite well received when it came out.

I asked Gazza if he would like to do something like that here. It took him a few milliseconds to answer yes. And then I asked Hanz, ZČ's owner, if he would like to take part, too. He answered even quicker. We got to talk about what sort of beer could be made. At first, I thought about one of those crazy Scottish IPA's from the 19th century Ron was talking about in his blog, but Gazza said he'd like to do something more Czech, and he was right. We picked Baltic Porter, there aren't that many strong dark lagers around even though there is quite a tradition with them.

Kirsten England, of Let's Brew Wednesdays fame, was kind enough to send me a Baltic Porter recipe that Gazza tweaked a bit, before it was sent to Pivovar Kocour, where we went to brew it last weekend. 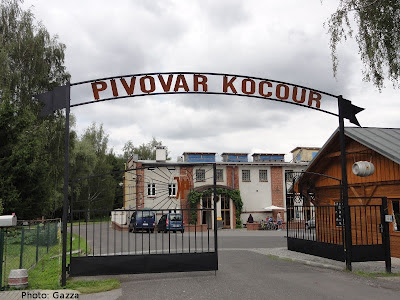 Gazza, Hanz and I arrived in Varnsdorf around 9AM on Saturday. We were received by Pepa, the brewery's head honcho, and Standa and Martin, the brewers. We got to work almost right away. A few adjustments needed to be done with the recipe and the way it'd be brewed, a double decoction mash, of course, it's a Lager, after all. 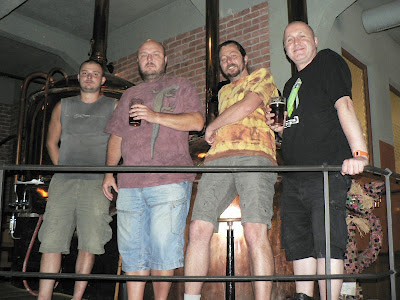 Once the specialty malts (Carafa special I, Carared and Munich I) were in the mill (the Pilsen malts have their own, massive one) we went to the brewhouse already with a pint in our hands*. Kocour's brewing gear is a work of art. It dates from the 1950's, it originally was used by the Brewing Research Institute when they operated in the Braník brewery. Kocour got it from Černokostelecký Pivovar a couple of years ago. The pots are made of copper, its heated by steam, it's gorgeous to look at, and when you touch it you get a feeling you don't get with stainless steel, a soul perhaps. Anyway, we were all in love with it. 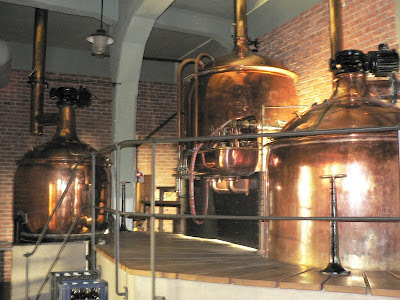 Once the mash started we took care of the other thing we came to do, eat and drink, specially drink. The food was lovely! Venison broth with liver dumplings for breakfast, venison guláš for lunch, roasted, smoked pork knee for dinner and venison paté for a late night snack, all home made, all delicious. Between this and that, we went through pretty much the whole range of Kocour beers. I have little to add about their Ales (unfortunately, their stout wasn't on tap), overall, they are pretty good. What surprised me, though, was their lagers. Both the tmavý and the světlý ležák tasted wonderful. With all the attention their warm fermented beers get, it is easy to forget how capable Pivovar Kocour is when it comes to lagers. 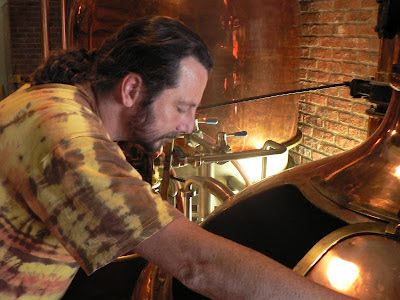 While we ate, or whenever we didn't have to be at the brewhouse, we all talked about beer and brewing. We mentioned the possibility of cask age the X-31 (quite a monster, BTW), Gazza explained us the principles of bottle conditioning (Kocour had a go at it once, but it didn't turn out well) and during this chats and while brewing, we all learnt a lot, specially me.

And since we are sitting and drinking, I should tell you a bit more about the pub at Kocour. It's really worth visiting. It has one of the most beautiful bars in the country. Outside there are farm animals running about. Once they realise their plans to add some accommodation within the facilities, it'll be a great weekend destination for the whole family. 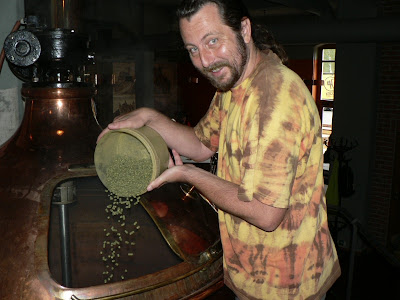 But back to brewing. From the moment the malts were put in the mill, until the wort went into the fermenter, 14 hours went by. The sparging took forever and then we had to wait quite a bit until the bugger started boiling. Gipsy Porter (thus the name) will be a pretty big beer. We aimed at 19º Balling, we got almost 20º. It's black, really black, blacker than a gorilla's asshole and the wort itself tasted gorgeous. We were all very, very excited and can't wait to drink it in a couple of months. 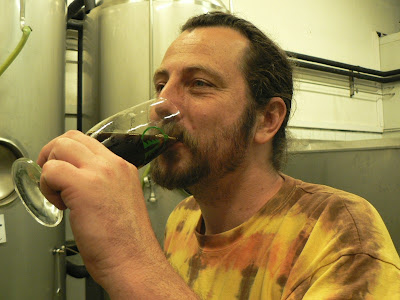 We went to our hotel after midnight, tired, a bit pissed (well, make it very pissed for Hanz, who had joined Pepa at a rock concert), but the kind of satisfied feeling you get after a making something.

We were back at Kocour before 9. Had one of the best breakfasts I've ever had, the home made paté and a pint of SUB-Nahradník in the gentle morning sun. When we said our goodbyes there was a special bond among us, one that was somehow deeper and stronger than before, and you could see in everyone's eyes the look of "Fuck! We must do this again some day!". 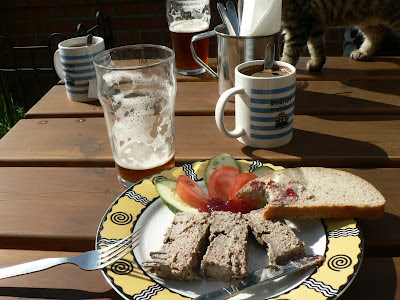 To me, this was a great experience. After more than five years of ranting and writing about beer, I've been finally able to change the beer landscape in a tangible way, even if that only means a small shrub on the slope of a hill. I want to give my deepest thanks to Gazza, Hanz and the whole team at Pivovar Kocour for making it possible.

*SUB-Nahradník, a temporary replacement for Sumeček, which had to be put in the bench due to the lack of Amarillo. Not as good as the Catfish, but like a good reserve at Basketball, it can hold the game while the stater gets its rest.