Just like I told you the other day, last weekend I went with my family to Kostelec nad Černými lesy with the festival, or celebration, as main excuse. We had a fantastic time, pity the weather that was on the wrong side of crappy, but there's nothing you can do about it.

We arrived on a very warm Friday evening. We were accommodated in the dorm that belongs to the local branch of the National Agricultural University, a building from the 18th century that used to be a orphanage and a hospice. The rooms were rather spartan, but very comfortable, more than adequate to crash for a couple of nights.

Once we had left our stuff in the room, we went to the Pivovar. Jarin, who had invited us, was waiting there, together with Milan Starec, one of the owners and a very nice guy. The pub is beautiful, it reminded a bit to those rural pubs in Franconia. The walls are full of treasures, old adverts of bygone beers, photos and documents from the times when Černokostelecký Pivovar was still brewing (in the golden years it had a volume of up to 70,000 hl a year and was the biggest in Central Bohemia). The atmosphere was great. We shared a table with a couple who were also on a visit and spent much of the dinner talking with them. 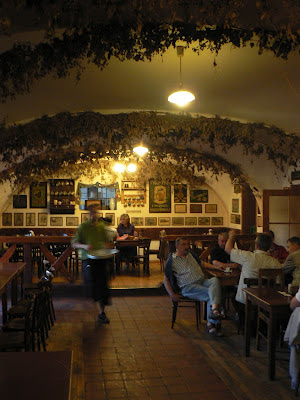 Shortly after we had sat Jarin came back with two pints of his very own Jantár, one of those rather shy beers, that need a bit of time to open up and show its subtle beauty, delicious. I knocked down two while I wolfed a massive řízek with potato salad (the good reputation of this pub's kitchen is well deserved). 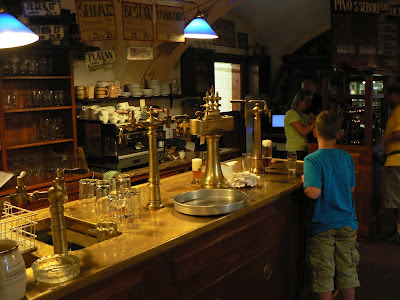 After eating like cavemen (even my daughter managed to eat most of a řízek bigger than her head) and having a quick chat with Milan, we went to a corner in the courtyard to meet a few friends. There I found Vladimír Černohorský, Brew Master at Únětický Pivovar and an über top bloke. He's 70, has been brewing for more than half a century and he still loves his work and feels he has stuff to learn, a true master and it's an honour to be among his friends.

A while and two pints later I walked my wife and daughter to the hotel, gave each a good night kiss and went back to the brewery. I kept my promise with Milan and had with him a glass of their home made sour cherry liqueur ("a glass", what en euphemism), it was delicious. We had some beer and a few words. The beer, tapped in a 1.5l copper tankard, was Bešťák, the Světlý Ležák brewed for the event, a pale lager with an attitude that could have spent a week or two more in the cellar, but was still very nice.

Milan had to get back to work so, tankard in hand, I went back to that corner of the courtyard to live one of those magic beer moments. They were tapping two beers there, the above mentioned Jantár, and Černá Svině, a dark beer also brewed by Jarin. We were all standing around a wooden barrel, talking about old Czech films and books, listening to the brewing stories of Černohorský and one of the other owners of Černokostelecký Pivovar, laughing until our jaws were almost falling, with the copper tankard passing from hand to hand being refilled every time someone wanted to leave. Word can't describe such joy. But the day had been long and I went to bed some time after 11, quite tired but very happy.

When we woke up the next morning I felt as if we had slept months and not hours. Not because of those feelings you sometimes get after spending the night at a foreign place, but because the temperature had dropped by almost 20ºC from the previous afternoon and the sunshine was only a nice memory. We had breakfast at a café in the town's main square, it turned out to be really beautiful, my wife and daughter loved it, a liked it, too, but was eager to go to the Pivovar. 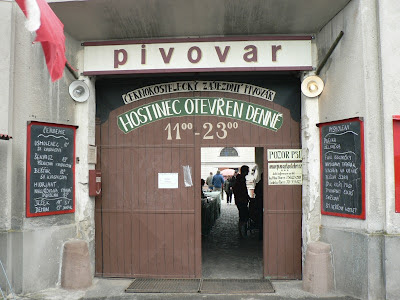 Needless to say, there weren't many people, it was still early and the weather wasn't the kind that makes people say "yeah! let's spend the day getting pissed outdoors!". There were already quite a few familiar faces, though. We each got a beer, mi better half picked Šenvajz, a very much by the numbers weizen that still managed to have enough personality to make it interesting, I picked Mudrlant, a black beauty that I would have sworn was a Stout, if I had drunk it blind. The roasted and the rye malts gave it a lot of character, while the smoked malts had been expertly used like a spice, giving it that extra level of complexity without taking the centre stage.

What I like the most about this kind of events it's not so much the beer or the food (by the way, that fire roasted smoked ham was gorgeous), it's the people. I met a couple of friends whom I hadn't seen for a while, a few of the štamgasty from Zlý Časy and some other colourful characters of the local beer world. It seemed that every time I turned around someone would say hello to me.

The main feature of this festival was the barrel pitching. In the past all beers fermented and matured in wooden barrels and to prevent them from getting in touch with the wood and contaminated, the inside of the barrels was coated in brewer's pitch. As with every other traditional craft, it is fascinating to watch when performed by masters. There was a time when breweries would employ platoons of coopers and pitchers. The pitch had to be replaced periodically and was done even with the biggest casks (in the courtyard there was one with over 800hl capacity). Here they showed how it's done only with smaller barrels, the plan, according to what I heard, is to have them filled with beer. 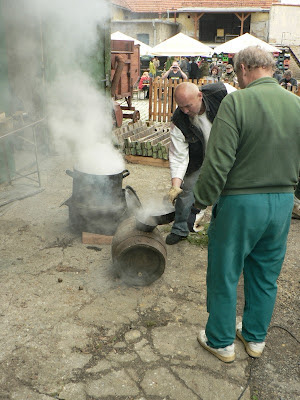 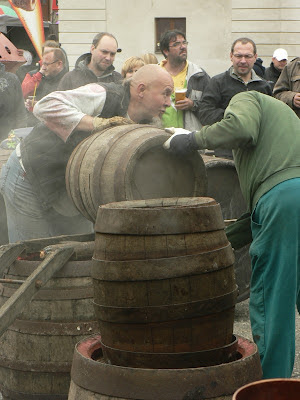 Which was something we could actually taste. Podkovaň 12º tapped from a barrel that had been pitched a few days before and filled straight from the brewery's lagering tanks. Wonderful! Pitch isn't supposed to add any flavour to the beer, but when this barrel was filled, it was still rather "fresh" and it had given the beer an intriguing aroma. 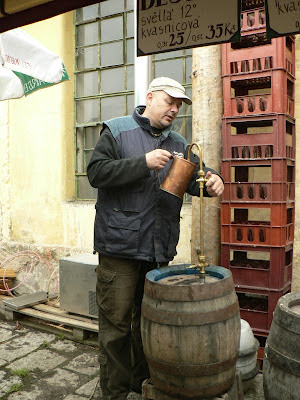 And to drink it from the copper tankard I mention above was even better. 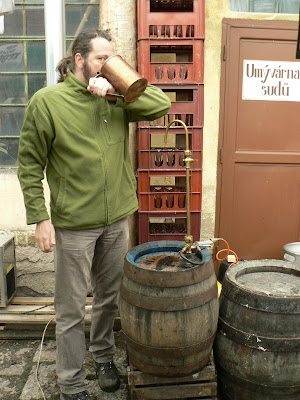 And that wasn't the biggest tankard of that day. 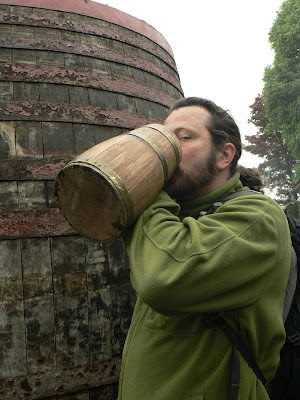 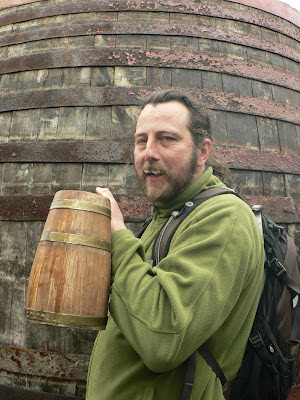 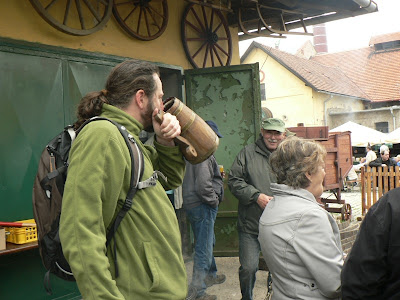 Just like the evening before, in the barrel corner, beer and laughter flowed freely while the mastodontic tankards passed from hand to hand. The best word to describe all this is "beauty". 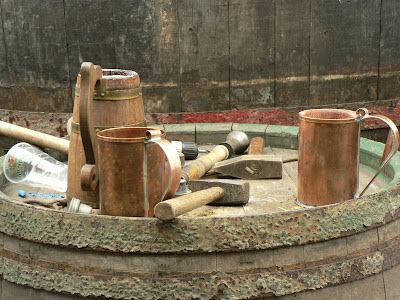 Although the weather wasn't showing any signs of improvement, the place started to get more populated and the atmosphere got livelier. With my wife we took turns to look after our daughter (who also had a cracking day and her fair share of beer, too). 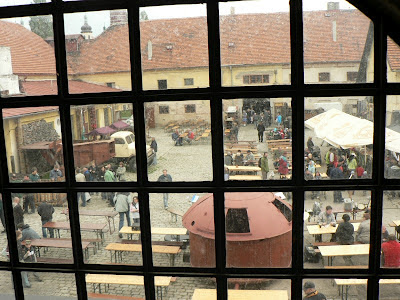 We took one of the tours to the old brewery, or actually, that was the plan, but Nela was having none of it, she wanted to go back to the trampolines and it was my turn to keep an eye on her. Fortunately, later I was able to see the facilities with Milan. The brewhouse is a beauty, it can brew 160hl of wort and they are very likely the biggest (copper) coal or wood fired tun and kettle in Europe, if not the world. 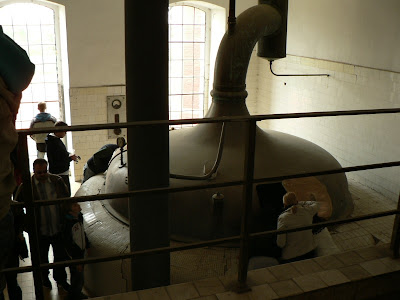 Milan told me they expect to get it to work within a year. The fermenters are basically ready and the works in one of the lagering cellars are already quite advanced, there are only a few details to sort out with the brewhouse proper. The brewery was shut down in 1987, Milan and his partners bought it over 10 years ago with the plan of resurrecting it. All the money they make with the restaurant, etc. goes to this project. The investment in time and effort has been huge. You all know very well what I think of the use and abuse of the word "passion", but I don't think there is another way to describe the thing that motivates these people to do what they are doing. It's true that in the long run this is still a commercial enterprise, but they could have done things a lot easier and faster (and cheaper) by setting a microbrewery with modern gear, keeping the old stuff as museum pieces. I'm sure they would have been very successful, but they chose the longer, harder and riskier road and they deserve respect for that. I can't wait until those old pots start brewing again, I'm sure the beers will be very good, because besides passion and all that, these people really want to do things well.

After having some dinner and leaving my family safe in their bed, I went back to the pub to keep on drinking, talking and having a great time. Tilting a bit to starboard I went to sleep after midnight, feeling happier than a kid at Christmas and already looking forward to going back to Černokostelecký Pivovar, a place everyone should visit some day. 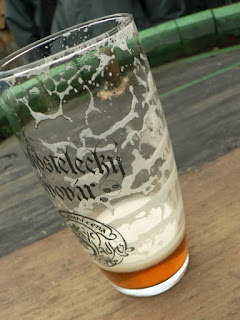 PS: Many thanks to Jarin and Milan for their hospitality and generosity.