On May 19, 2002 I took an Air France flight to Paris, which would later connect me to another AF flight, operated by Czech Airlines, that would leave me in Prague the following day at around 7PM. 10 years have passed since that event, the most significant one in my life, bar none.

I wanted to celebrate this anniversary my way, drinking a beer that would fit the moment. I meditated long on which it should be. The ideal would have been to find a 2002 vintage beer, but that turned out to be out of the question. Having come to terms with that, I thought that I could celebrate with more than one beer, each with their meaning, including a truly special one that I had never drunk before. Here they are. 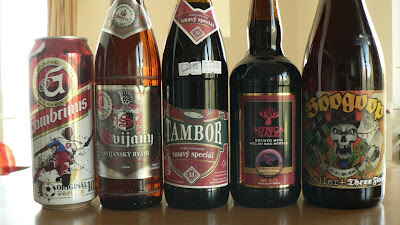 Gambrinus Světlý, canned: It was the first beer I drank after getting off the plane, so it belonged there. I won't lie and tell you that I remember what the beer was like then, but on Saturday Gambáč was exactly what I was expecting, no more, no less.

Svijanský Rytíř: My epiphanic beer. I might not be writing this if it hadn't been for this pale lager that is still among my favourites. As reliable, trustworthy and great company as an old mate.

Tambor Tmavý Speciál: I spotted it by chance and I liked the rather fucked up label. It represents one the one hand some of the hangovers I've had and on the other that not everything has been very pretty these 10 years. The beer, like drinking the juice of brownies baked with bitter chocolate and not too much sugar.

Myrica Gale: From the Welsh Mws Piws, brewed with bog myrtle. A present from my Welsh friend Dave. It represents the selfless generosity that I found when arriving here, something I was not very used to. Delicious, incredibly interesting and makes me wonder why the fuck there aren't more beers brewed with this herb.

Boogoop: A collaboration of Mikkeller and 3 Floyds, brewed at De Proef, Belgium. When I saw it at Pivkupectví I realised that it was the beer I'd been looking for. Just like when I decided to move here, I had half certainties. Everything I had drunk so far from Mikkeller had been good (though sometimes not wonderful), but I'd never had anything from 3 Floyds (though I had good references). The best way to describe it is "LOUD". It is like the first demo of a young rock band, who, despite not bringing anything new to the scene, with the guide of an able producer, they could still kick some ass. Just like my moving to Prague, it was far from cheap and there was the slight fear that things wouldn't turn out well, which was not the case, fortunately. However, knowing what I know now, would I do all this/buy the same beer again? The answer is "yes", but for only one of them. Guess which?