By Pivní Filosof May 16, 2011
I was the other day at the opening of Zubatý Pes, which could considered either the most deluded or the ballsiest pub in Prague.

It's not because of its location next to what looks like a warehouse in Petrohradská, a street in Vršovice with little pedestrian traffic (there's not much to choose from around in this residential neighbourhood), nor because it opened with 15 taps (something that surprises fewer people each day). It's because of the beer list, or at least, part of it.

Mike and his wife, a.k.a. Mr and Mrs Odd Dog, are distributors in the Czech Rep. of Brewdog, Mikkeller and Nøgne-Ø, among others, and a sizeable number of those 16 taps are reserved for products of those renown breweries. And really, you have to be either mad or have a lot of balls to sell in Prague so many imported beers with an average price of 60CZK a 0.3 or even 0.2l glass (and not because those beers aren't worth it). To make this bet a bit safer, the list also includes stuff from well known names like Kocour, Matuška, Tambor and Kout. 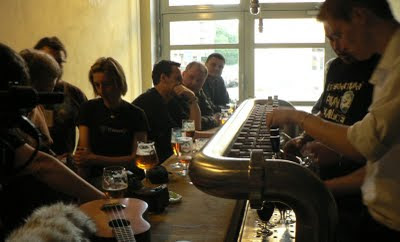 The place itself isn't too shabby, either. It's divided in three levels. There's a long, narrow bar at the entrance (where I will sure sit each time I stop by) with a couple of tables in the back. Above there is a loft with a few more tables and in the underground floor there is a pretty spacious room with tables placed at a good distance from each other. The style of the decoration might not be my cup of tea, but I must say that it works well with the environment and the concept.

Mike also happens to be a guy who knows his beers and he has already seen that they are served in the best possible conditions. To help him with that, he has conditioned one room downstairs that is very well insulated and with a constant temperature of 12ºC. Right by its door there are two coolers for the dispensing lines, each set at a different temperature. It's nice to see people that, besides the passion and all those things that romantics love to talk about, have as a priority to do things well from the very beginning.

I hope Zubatý Pes becomes a success. Mike and his wife are top people and I would like them to be talked about as a couple with vision and balls and not as deluded and naïve. 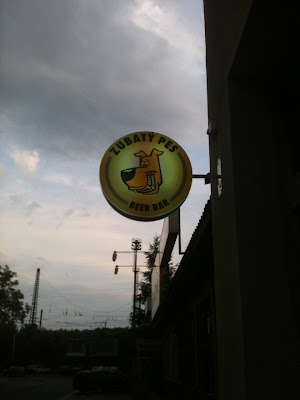