By Pivní Filosof May 06, 2011
Being on a family holiday made it quite difficult to be able to do some bar crawling and experience the local beer culture as much as I would have liked (for which my finances were probably grateful).

Ávila, a gorgeous town, no doubt, it's one of those places in Spain where you still get a complimentary tapa, or better said, a pincho (a small plate with a snack), with each beer your order. That's right, you get free food with your beer, and I don't mean peanuts, but proper food. Since in most cases the said pinchos were really good, I did a little mind exercise and convinced myself that it was the food what I was paying for, while the beer was the complimentary bit. And since it's not polite to complain about something you are getting for free, I was able to enjoy the experience more.

At the bar of Santuario de Sonsoles, a very nice place just outside the city, we ate generous portions of potato tortilla and salads with mayonnaise, each for 1.50EU. The beer we got with them was Cruzcampo Glacial, which was fortunately served just as cold as the name promised. 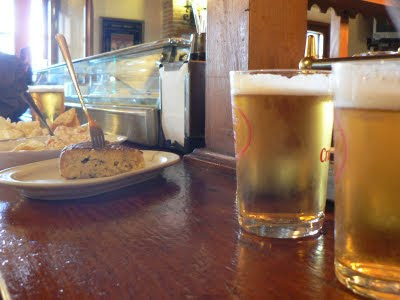 It wasn't until the last full day of our stay that I was able to escape for a few hours with the excuse that I wanted to see if I could find some trekking boots for myself, which gave me the opportunity to visit a couple of bars alone.

I first stopped at one of the several that are on the way between my parents' place and the centre of town. 1.20EU bought me a pincho of three small chorizos that were as fatty as they were tasty and that I washed down with a glass of Mahou Clásica, which was pretty much what you can expect from a classic Spanish pale lager, but that it still did a very good job cutting through the grease of the pincho. 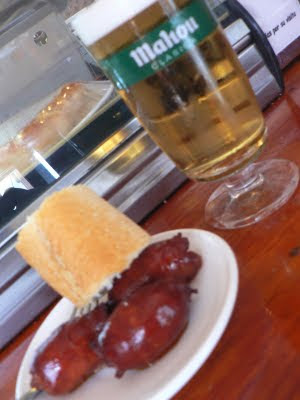 Already in the centre, and having failed to find what I was looking for, I came across a rather big bar in Parque del Recreo that offered a bratwurst and San Miguel Selecta for 1.80EU. The sausage wasn't bad at all, though I could have done without the ketchup and the side of mash potatoes was most likely instant, but it was a generous portion. The beer, pretty much the same as Cruzcampo Gran Reserva, or at least that was what it seemed (it was a tad too cold). For a freebie, pretty good, really. The service here was excellent and looking at how fast the servers moved behind the bar was almost hypnotic. I also saw something that left me flabbergasted (finally, a chance to use this word), "claras", i.e. pale lagers diluted with sparkling water. It seems that for some people those beers aren't bland enough. 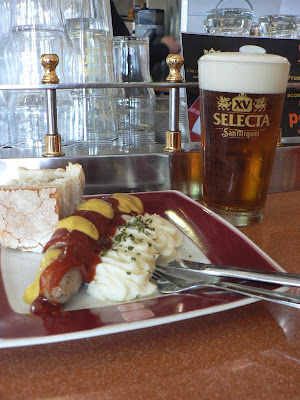 I would have loved to continue my crawl, but a telephone call told me lunch was in the oven so I had to go back home.

My conclusion, if you know where to go, at least in Ávila, you'll be able to have a very nice light lunch for less than 5EU, with free beers on top, all while you walk around this lovely city.

There was also something that pleasantly surprised me at most of the bars I visited, how well beer was served (temperature notwithstanding). The glasses were very clean and were always rinsed, or showered  and the beer was dispensed with just the right amount of top pressure, resulting in very low carbonation and a nice thick head. Better, I must say, than not few restaurants here in Prague.

Oh! And if you'll allow me, I want to tell you about another great culinary experience I had during my holiday.

The family of my sister's de-facto hubby is from a very small village near Ávila and their tradition for Easter Sunday is to go to the nearby mountains to eat one of the most wonderful foods in the world, hornazo. 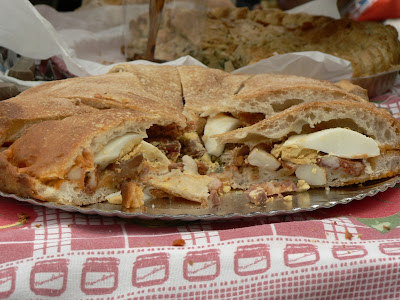 Basically, it's white bread that it's baked filled with pork, chorizo, bacon and hard-boiled egg. In this particular case, and since these people are farmers and have some pigs, all the ingredients were home made. Just thinking about it makes my mouth water. I'm planning to recreate this delicacy at home soon.

At the pic-nic there were also pies, chorizo, ham, more meat, salads, all delicious and it was all paired with ice-cold cans of Mahou Cinco Estrellas, which went down wonderfully.