By Pivní Filosof May 09, 2011
For a town of its size, Ávila has a pretty nice number of good places where to go for a drink, tapas or food in general. For me, the best among all of them is a pub called La Barraca.

But before continuing, there's a disclaimer. Carmen and Fernando, the owners, are great friends of the family, whom we even have lodged in their visits to Prague. But even if that wasn't the case, I believe my opinion would stay the same, La Barraca is the best place to go for a drink in Ávila. 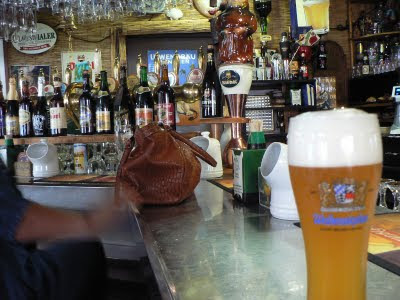 To begin with, there is the beer list. About 10 taps and a pretty decent range of bottles. Among the kegs you can find Weihenstephaner Hefe Weissbier, which is basically the beer of the house, while the rest seem to change with more or less frequency. At the time of my holidays they were tapping St. Bernardus Prius, Pilsner Urquell and a Framboos. Among the bottles you can find beauties like Schneider TAP 5 and St. Bernardus Abt 12. Everything is served in the best conditions and in its proper glass. Fernando is someone who's been doing this for two decades already and he knows very well how to take care of the beers he offers.

But that's not it. Carmen is a great cook and at La Barraca you can also eat excellent "pinchos" and "raciones". Occasionally, they serve knedlíky (according to my wife's recipe) and guláš (inspired by a recipe of yours truly).

Some might say that the beer list is a tad too "belgocentric", that it doesn't include anything we haven't seen before or that the Spanish "cervezas artesanas" aren't represented, etc. and you'll be right, regardless of whatever reasons the owners have for this (all of them valid, in my opinion). But for me a pub is something more than the quality, varierty or originality of the beer list, or even the food, it's about the place itself and how you feel there. And here, La Barraca also makes a difference. 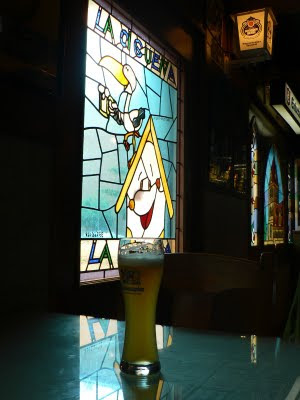 It's pretty small, with only five or six tables, a long bar and an area surrounding a column in the middle of the room, where patrons can lean while sipping their beers and nibbling their pinchos. The decoration is full of beer memorabilia of all sorts, which together the stained glass of the windows create the atmosphere of a shrine dedicated to a god who wants us to enjoy life at its fullest instead of praying, fearing or adoring him with robotic rituals nobody understands anymore.

Another thing at La Barraca is that you'll be left with the impression that everybody knows each other there. I've come to like that at pubs, bars and cafés, even if I don't happen to be part of the everybody. I often feel, perhaps foolishly, that I'm only a couple of pints from becoming one of them. 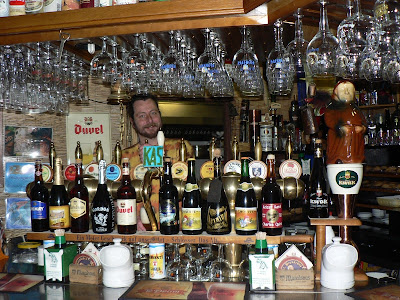 So, if you ever visit Ávila, which I can't recommend enough, don't miss La Barrace, it'll be worth it.